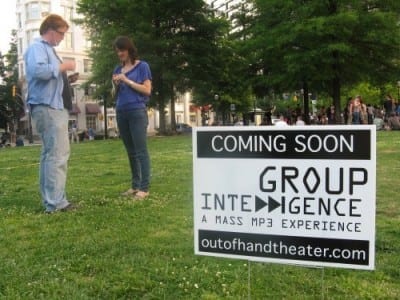 Out of Hand Theater could be forgiven for feeling a bit waterlogged these days. Members have been workshopping playwright Margaret Baldwin’s work-in-progress “Without Which Nothing,” which examines the world’s dwindling water supply from a quirkily global perspective. (Atlantans got a first glimpse of, and weighed in on, the work during the recent “Brave New Works” series at Emory University.)

Further soaking this cutting-edge theater troupe’s minds is their “Group Intelligence” collaboration with their Dutch counterpart, the Lunatics. In both instances, as in many others with Out of Hand, the people have their say. After the “Without Which Nothing” reading, audience members provided feedback, and playwright Baldwin and Adam Fristoe, Out of Hand’s co-artistic director, dutifully scribbled down notes. (That production is scheduled for a spring 2012 mounting.) 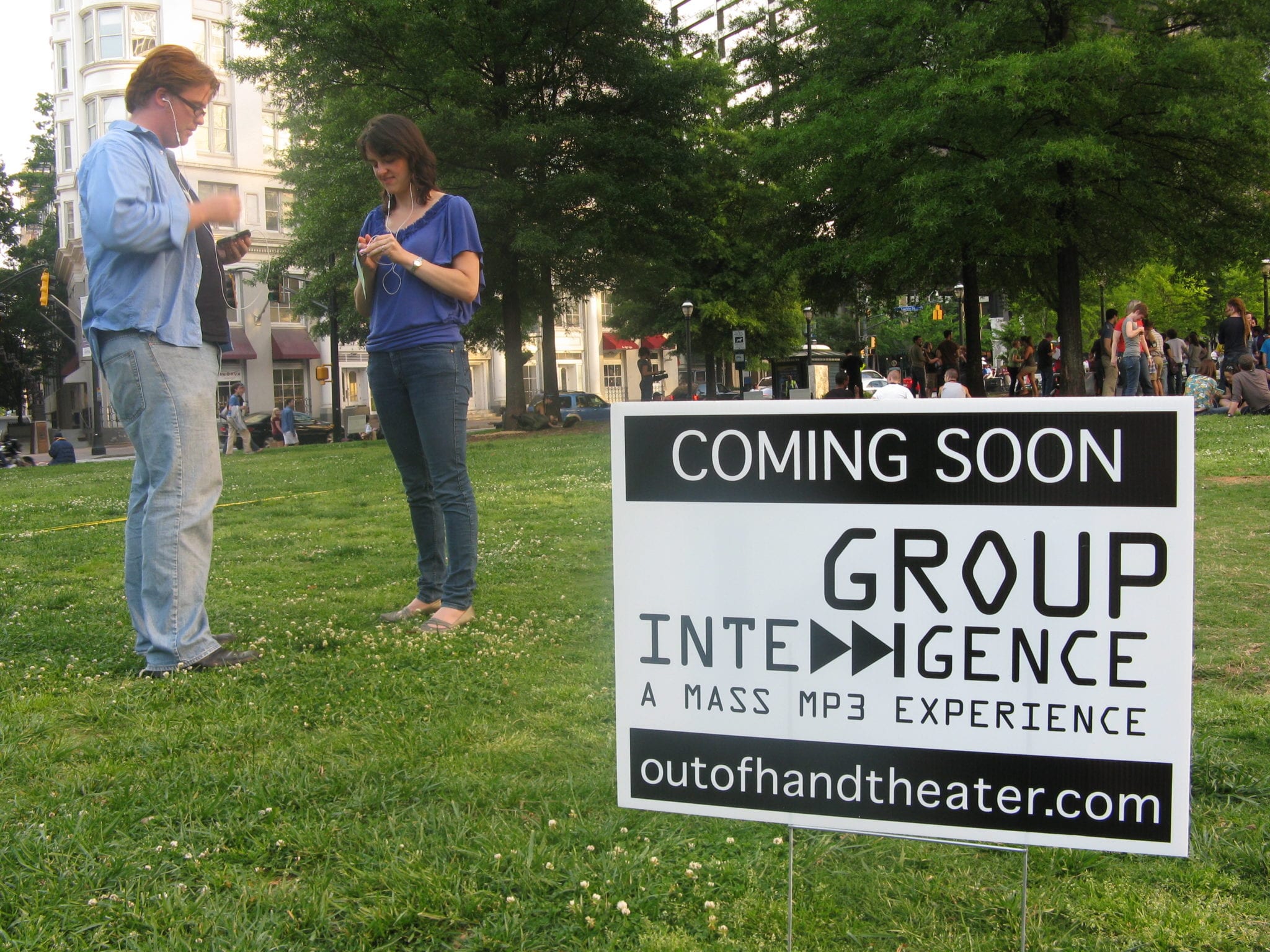 But “Group Intelligence” takes the audience members and makes them the performance, in what unfortunately has been partly described as a “flash mob” experience. I say “unfortunately” because I fear the trend is now in its 16th minute of fame, but also because “Group Intelligence” is far better than that. The set-up was a lot more fun to experience than it is to describe: Wannabe participants assembled first at Emory (last weekend) and then Woodruff Park downtown (this past weekend), having already downloaded mp3 files that would guide them through a series of suggested activities in shifting groupings. (Photos by David Lee Simmons.)

The goal? Primarily to gain a greater appreciation of the role that water — which is starting to feel as dwindling and precious a commodity as oil — plays in our lives. It’s about what we think of water, how we value it, how we might treat water as an everyday and long-term concern.

For too long I had observed Out of Hand from a safe distance — often out of ambivalence about participating in something that felt too conceptual for its own good, plenty of times out of sheer laziness. And when I showed up at Woodruff Park, mp3 files downloaded and sneakers fastened, I warned Fristoe that I might just watch from afar and not dive in, so as to take better notes. He frowned. “I’m not sure how you can’t participate,” he cautioned. 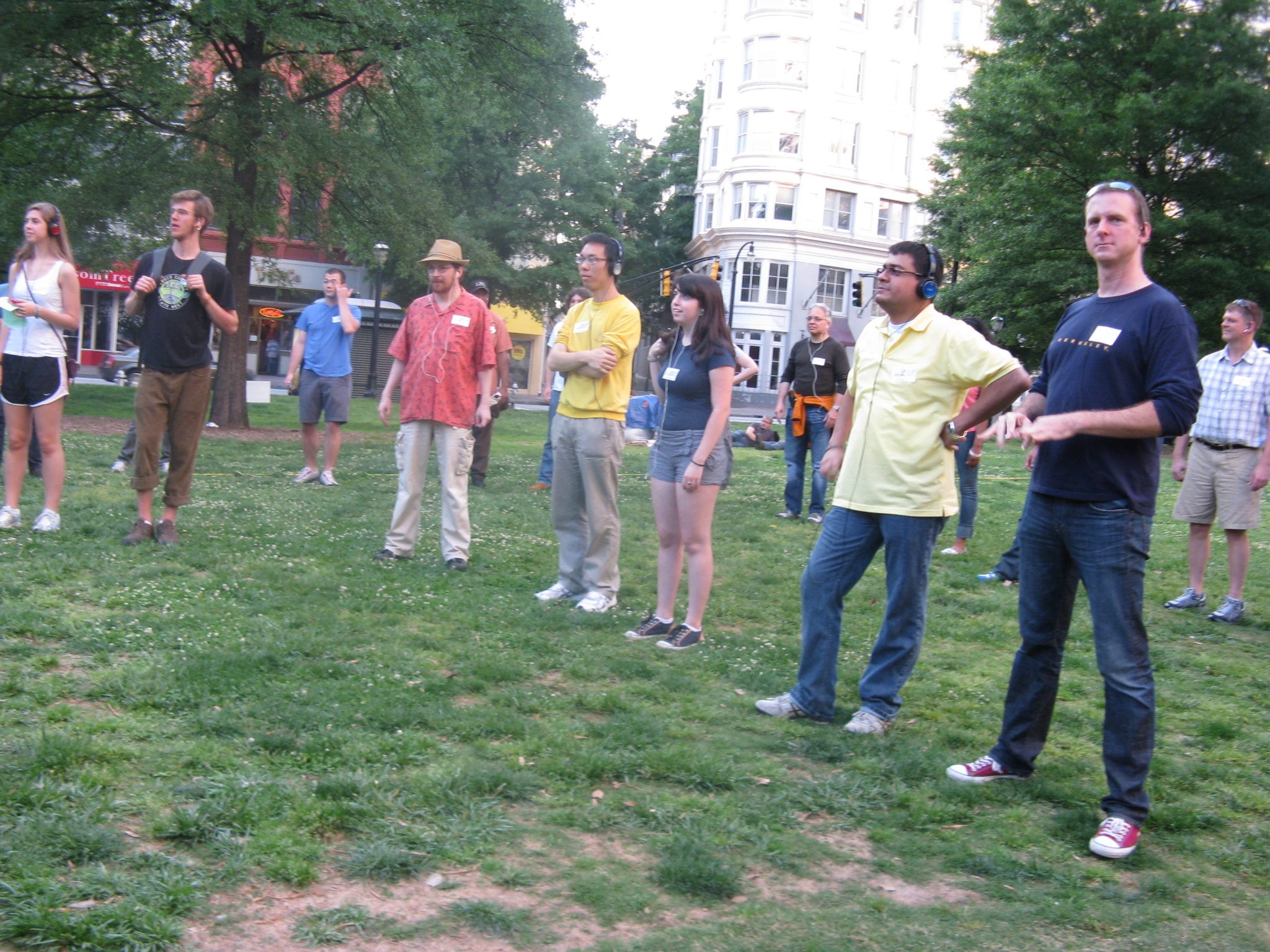 He was right. With Out of Hand, the experience is the thing, and as silly as some of the audio suggestions sounded at times, the truths revealed themselves by the end of the hour-long trek. So one moment you’re hearing an aggressively pleasant voice (think “Blade Runner” or the Magic Kingdom) urge you to run in any direction as a trippy techno beat plays underneath all while drawing a connection from you (a molecule) to the rest of the universe. Then you’re walking, randomly and then in a direction, and then you’re forming a path with others (all listening simultaneously to the same track).

Before long, the 150 participants are divided up into groups urged on by a nominally chosen leader whose orders blare from a modest boombox. And the next thing we know, we’re all getting to know each other and sharing information and thoughts. When, at one point, the disembodied voice asks us which commodity we’d prefer — electricity or water — you can feel the opinion shift from the latter to the former over a matter of seconds. When we are asked whether we let our faucet run with water while we brush our teeth, the guilty expressions are ubiquitous. And soon we are charged with the task of gathering, caring for and transporting a pile of sand that represents a finite amount of water.

Group decisions are required to carry this sand/water around a few blocks and back to the park for an ultimate display of symbolism — all the sand grouped into huge bags that are lifted by a large contraption, and everyone realizing how much power we have to conserve something we might very well lose.

Out of Hand will tour science museums around the nation before continuing this project overseas with its Dutch collaborators. The project is sponsored — no joke — by the National Science Foundation and NASA’s Center for Chemical Evolution.

As a science project, “Group Intelligence” connects the dots among our needs, and need to care, for a valuable resource. As a group participation project, what first felt a little silly became a surprisingly fun and informative endeavor. A common response from participants afterward: “Next time I brush my teeth, I’m not letting the water run!”