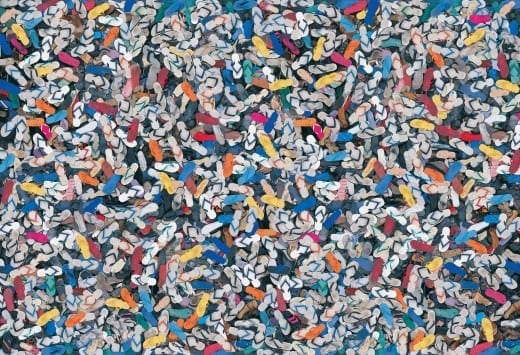 A gyre is a swirling, circular movement commonly associated with the surface area of ocean currents. In recent years, the word has taken on a more urgent and foreboding implication because these vortexes are collecting and distributing man-made garbage across the seas.

The Great Pacific Garbage Patch, considered one of the largest gyres in the North Pacific, is twice the size of Texas and carries more than 3 million tons of plastic litter. Many others are growing in other parts of the Pacific, the Atlantic and the Indian Ocean.

Plastic has become a major global concern. Scientists say that a plastic beverage bottle could take up to 450 years to decompose. Who knew that such a technological innovation would become the biggest threat to our oceans, wildlife and future existence on the planet? Fran Crowe and Steve McPherson are among those who chose to take an analytical approach to the topic in the manner of archeologists who are excavating, identifying and cataloging relics from some extinct culture. Crowe’s Souvenir Packs, for example, is a collection of flattened soft drink cans, fragments of candy wrappers, sea-weathered cigarette packs and other man-made trash presented in hermetically sealed plastic bags like forensic evidence. Even in their crushed and reconstructed forms, one can still easily identify a multitude of brand names associated with the symmetrically arranged flotsam.

70 Marine/Beach Plastic Objects, 1994-2012, Evidence of Bad Weather and several other wall installations by Steve McPherson take an even more obsessive approach to the classification of plastic objects by creating separate showcases for discarded doll heads, toy parts, bird images and other synthetic refuse found on the North Kent coast of England. The faux-academic approach is both whimsical and overwhelming in its implications.

Artists like Mandy Barker and Elizabeth Leader use color and composition to create a sense of wonder and awe that is at odds with the true nature of their subject. Barker’s Soup, Refused presents a maelstrom of colorful fragments that could be some extraordinary event taking place in the cosmos but is actually a swirling earthbound mess of toothbrushes, disposable razors, chunks of Styrofoam and other trash navigating the ocean. Leader’s Tires Underwater has an almost lyrical, lighthearted quality in its depiction of a young swimmer in goggles seemingly oblivious to the aquatic landscape of submerged tires beneath him. Midway by Seattle-based artist Chris Jordan brings both documentary-like realism and pictorial beauty to its disturbing subject matter, the contemplation of a dead Albatross chick. All that remains is the skull, feathers, some bones and the brightly colored bits of plastic that were mistaken for food and fatally ingested. Plover by Susan Middleton employs a similar tact in its powerful portrait of a native bird in the Northern Hawaiian Islands that died while trying to bite through the red plastic ring that was stuck on its face. Some of the works reflect a “hands-on” approach, utilizing recycled plastic and trash as the main ingredients. Pack Dogs by Cynthia Minet is a spellbinding installation of five large-scale dogs pulling a sled. Made out of recycled plastic, the creatures are lit from within by colored lights in shades of purple, red, yellow, green and blue and could be a vision from some future dystopia. Canines are also a recurring motif in the work of Australian artist Sue Ryan, whose Ghost Dog is composed of recycled wire, thread, beach rope and synthetic ghost nets, an environmental hazard when fishermen leave them, accidentally or intentionally, at sea.

One of the most startling images in the entire exhibition is Thongs by John Dahlsen (above). This large-format photograph (9 by 4 feet) depicts a teeming landscape of over 1,000 lost plastic sandals that washed up on a remote beach in Australia. No scientific study or investigative report could make a more telling commentary about our disposable society. It could also be seen as a darkly humorous take on reducing the human footprint on earth.

If art is supposed to educate, confront, inspire or even outrage the viewer, then Gyre: The Plastic Ocean is a success. But does it have the power to motivate people to take action and help reverse a situation that is quickly spinning out of control? Only time will tell.