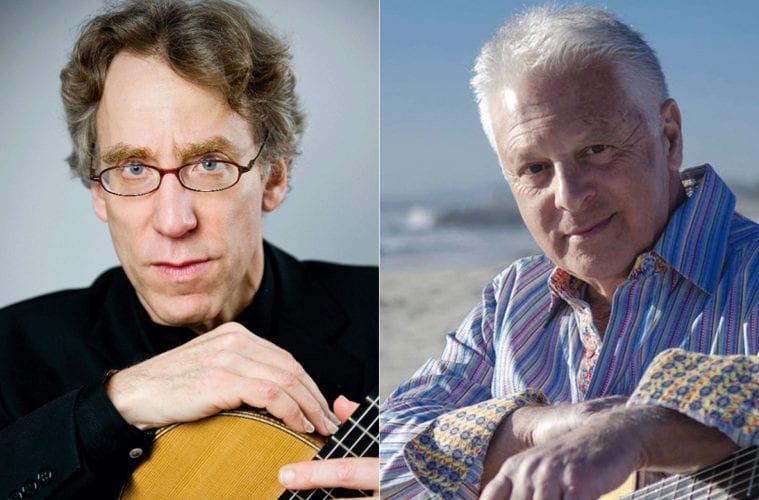 Virtuoso classical guitarists Eliot Fisk and Ángel Romero performed a joint recital on Sunday afternoon at the splendorous Spivey Hall on the campus of Clayton State University, located on Atlanta’s suburban south side. Entitled “Viva España,” the program of duos and solos emphasized not only the artists’ performing abilities but also their skills as transcribers. In this performance, Fisk and Romero played guitars made personally for each of them by American luthier Stephan Connor.

Despite the title, Fisk and Romero opened with the sole non-Spanish work of the afternoon, their transcription of Antonio Vivaldi’s “Concerto in D major for Lute and Strings” with Romero taking the solo role and Fisk the condensed orchestra part. That was followed by their transcription of the “Adagio” movement of the famous “Concierto de Aranjuez” by Joaquín Rodrigo, with the solo guitar and condensed orchestra parts similarly deployed between them.

That particular division of responsibilities worked well in these, given Romero’s somewhat brighter, more idiosyncratic tone and phrasing, with Fisk’s solid, more rounded sound providing a well-grounded substitute for orchestra, as much as one acoustic guitar can, that is, given that past a certain dynamic level the instrument cannot become louder, only more noisy. Nevertheless, the acoustics of Spivey Hall delivered as designed. No amplification was necessary, with details of articulation and color well heard even at softer dynamic levels.

Of interest was another difference in the two players: Romero used a traditional foot stand, which raises the left leg to support the guitar with the knee at the concave curve of the instrument’s body. In contrast, Fisk played with both feet flat on the floor, using instead an arch-shaped support, attached to the guitar’s rib with suction cups, which rests on the knee to raise the instrument to proper playing position, rather than raising the knee itself.

Following these opening duo works, Fisk, who was the last direct student of the legendary Andrés Segovia, performed his solo set. All of his selections, save one — a traditional “Merengue Venezolano” arranged by Alirio Diaz — were his own transcriptions of music by Rodrigo, Manuel Ponce and Isaac Albéniz. The redolent Spanish flavor of their compositions permeated the air.

Romero joined Fisk to close the first half with their new transcriptions from Manuel de Falla’s “Siete Canciones Populares Españolas” — a diverse bouquet of popular Spanish songs originally arranged by Falla for soprano and piano in 1914. Fisk and Romero presented six transcriptions of Falla’s seven songs — No. 2, “Seguidilla murciana” being the one song absent from their set and which admittedly poses some challenges to guitar transcription.

After intermission, Romero played a brief solo set of only two works, spending much of his time talking to the audience instead. First came the iconic “Malagueña” by Cuban composer Ernesto Lecuona. That was followed by “Fantasia,” written by Romero’s father, guitarist and composer Celedonio Romero. The elder Romero brought his family from Spain to America in 1957 on a secret U.S. visa to escape the iron-fisted regime of Francisco Franco, settling in Southern California. Celedonio, with his sons Celin, Pepe and Angel, formed the guitar quartet Los Romeros in 1960. Angel remained a member until 1990, when he began to focus on his personal career as a guitarist, conductor and composer.

The concert closed with a final duo set, nine selections from “Canciones Españolas Antiguas” (“Old Spanish Songs”) originally arranged for voice and piano by poet and dramatist Federico Garcia Lorca, who had in his early years aspired to pursue a musical career as a pianist. Fisk and Romero presented nine of Lorca’s arrangements in their own versions for two guitars.

It was a bit of a surprise to see Fisk and Romero make use of capos in five of the nine songs, twice at the second and third fret and once at the fifth fret. This meant delays between these very short songs as capos were applied or removed, and fine-tuning adjustments made. This, along with Romero’s talk during his solo set, made the latter half of the recital feel looser and less formal than the first.

That’s a good thing, as even in a hall like Spivey, solo and duo guitar performances can be among the most intimate of concert experiences, and a feeling of direct communication and camaraderie with the listeners, as if one were performing for a dozen friends in a living room, can play an important role. And when artists, hall and audience come together in that symbiotic way, it makes a clear, cool autumn afternoon an excellent occasion for some delightful music making.