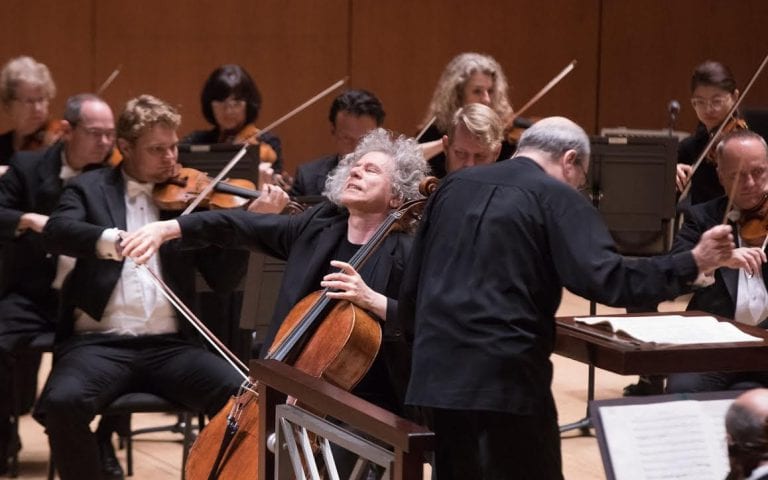 On Thursday evening at Symphony Hall, the Atlanta Symphony Orchestra performed a concert of music by Schumann and Mahler, led by music director Robert Spano and featuring British cellist Steven Isserlis as guest soloist. The program will be repeated Saturday at Symphony Hall.

Isserlis has enjoyed a distinguished career not only as a cellist, but as educator, author and broadcaster. In addition to two children’s books about classical composers, Why Beethoven Threw the Stew (2001) and Why Handel Waggled His Wig (2006), both published by Faber and Faber, his most recent book is an extensive commentary on composer Robert Schumann’s famous Advice for Young Musicians, published last year.

He was also writer and presenter of a documentary film about the life of Schumann, which seems umbilically tied to a recording of the composer’s Cello Concerto in A minor, Op. 129, made in 1996 with Christoph Eschenbach, Deutsche Kammerphilharmonie Bremen for subsequent release by Sony Canada. That brings us, not so coincidentally, to the presentation of that same work as the opener for Thursday night’s ASO concert.

A late-life work, Schumann’s Cello Concerto was written in 1850, the year he became musical director for the city of Düsseldorf, a post which quickly proved difficult for him with increasing evidence of a mental breakdown that would ultimately land him in an asylum in 1854, dying there only two years later. It is a work that is admittedly secondary in stature to his famous Piano Concerto, in the same key, composed five years before. It is, however, a great innovative work in its own right — forward-looking, if somewhat enigmatic and wayward in terms of departures from traditional structural conventions of the day, marking it as a truly Romantic concerto in demeanor from its opening notes.

Thematic material introduced early on is used and developed throughout its 25-minute duration, its three movements linked without pause, resulting in a very unified work despite its wide emotional compass. A strong sense of dramatic development holds together the work’s wide mood swings on its way to a brilliantly optimistic conclusion. Isserlis’ performance gave the concerto a subtle warmth and sensitive nimbleness, combining a loose agility with a glowing, luminous lyricism in its broader melodic passages.

As an encore, Isserlis performed Pablo Casals’ solo cello arrangement of the Catalan folk song, “El cant dels ocells” (“Song of the Birds”). Casals himself routinely played it in his own concerts as symbolic protest against the repression of Catalan culture by the dictatorial Franco regime in Spain. Given current events — the serious political upheaval from Catalonia’s decision to declare unilateral independence from Spain — it’s hard to avoid making an obvious connection between this performance and Casals’ historical use of that piece. Isserlis played with an inward passion, at times almost whisperingly.

A final note on this segment for the instrument nerds out there: Isserlis’ cello is the Marquis de Corberon (Nelsova) Stradivarius built in 1726 and on loan from the Royal Academy of Music, where he is now the Marquis de Corberon Visiting Professor of Cello. The cello was originally gifted to the academy in 1960 by Audrey Melville with explicit instructions that American cellist Zara Nelsova, who died in 2002, could have lifelong use of the instrument. Constructed on Stradivari’s “B” form, with a modern setup and grafted neck, the cello’s top is made from a pair of matching wedges of quarter-cut spruce with a slab-cut, one-piece willow back and willow sides, finished with a deep orange, translucent varnish.

For the concert’s second half — and I use that term loosely, as it was fully three times as long as the Schumann concerto — came Gustav Mahler’s massive, grandiose Symphony No. 7 (1905). Although it has been described as being “in E minor,” that does not really hold as much water as one might wish. It involves a complex tonal scheme. The introduction in B minor and the ebullient conclusion in C major belie the attempt to fully pin down its “progressive tonality” into a single key, a situation exacerbated by the symphony’s sheer duration.

It uses a very large orchestra, enhanced by a few instruments not found typically on the symphonic stage: guitar, mandolin and the unusual “tenor horn” — a conical bore brass instrument of the saxhorn family, also known as an “alto horn” in this country. It was played in this concert by ASO second trombonist Nathan Zgonc. As wide-ranging as emotions were in the Schumann concerto, Mahler’s Seventh achieves the same, but advantaged with the leverage of sheer scale.

The work is a long journey for the ear, covering widely diverse terrain, but all signature Mahler. Spano and the ASO gave the heady, extensive excursion its due, with many opportunities for individual players to shine — too many to go about trying to name them — driving the five-movement work to an absolutely thrilling, exuberant conclusion.