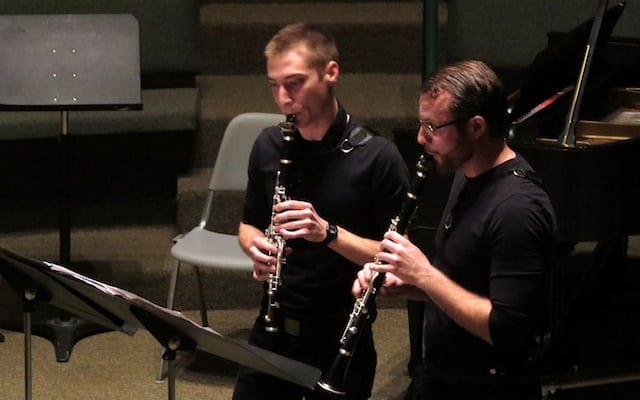 Review: GremlinsDuo return to Atlanta and take their clarinets on dynamic flights of fancy Tim Fitzgerald (left) and Jon Goodman of the GremlinsDuo. (Photo by Mark Gresham)

The GremlinsDuo returned to Atlanta on the final leg of their 2014 tour to play a late Sunday afternoon concert at the Unitarian Universalist Congregation of Atlanta. The two clarinetists — Jon Goodman of Carbondale, Illinois, and Tim Fitzgerald of Atlanta — at times also played bass clarinet, plus tenor saxophone (Goodman). They performed a clutch of eight 20th- and 21st-century works, including two by Atlanta composers. Curiously, three of the works were repertoire they had previously performed in Atlanta during a similar tour last spring.

One of those revisited works opened the concert, “Bipolarang” by Eric Mandat, a clarinetist/composer at Southern Illinois University, who mentored both Fitzgerald and Goodman during graduate study there. As the title implies, the piece makes its way through a wide range of emotions over the course of its eight minutes.

Fitzgerald and Goodman then swapped the intended order of the two works by the Atlanta-based composers, opting next to perform “Hot Work” by Olivia Kieffer, which had its world premiere on March 17 at Tennessee Tech in Cookeville, where the duo’s tour began. Kieffer’s driving, postminimalist style and bluntly unambiguous compositional architecture are informed by her extensive performing experiences as a percussionist. So much is she involved in performances of her own music, this concert was the first time Kieffer had ever been in the audience to simply listen to one of her compositions without performing in it herself.

Goodman then did a solo piece, “Forms of Flight” by George Flynn, for which the title is directly representative of the work’s extra-musical intent as commentary on both natural flight, such as that of birds, and historical methods of human aviation.

The duo followed that with “Ass Pants” by Erik Kofoed, the Atlanta-based composer who is known to local audiences as bandleader and contra-alto trumpeter of the Balkan brass band Mercury Orkester. Kofoed’s tuneful, rhythmically funky music closed off the first half of the show.

After a short intermission, William O. Smith’s brief “Four Duets for Four Demi-Clarinets” proved the most unusual and avant-garde work of the day. Parts of several clarinets were reassembled in nonstandard and incomplete ways, essentially being played as “half clarinets,” thus “demi” (meaning half or partial). Even more unusually, Fitzgerald and Goodman each played the pieces together in pairs, in the manner of ethnic instruments with dual-pipes. Each movement was compact, allowing the audience to take in and enjoy these technically unique but beautifully written miniatures without going on too long.

Fitzgerald then had his solo time on bass clarinet, performing Michael Lowenstern’s thoroughly compelling arrangement of the Hoagy Carmichael tune “Georgia on My Mind.” Lowenstern’s version feels improvisatory, even if notated precisely to give that impression. Different parts of the bass clarinet’s range were used, in virtual counterpoint, to give the listener an impression of two instruments. The lower notes implied a jazz string bass over which the tune was freely elaborated in the bass clarinet’s middle and higher ranges.

The Gremlins closed the concert with the other two works played in last year’s tour: “New Columbia/Big Bay,” composed for them by John McCowen, an aurally self-taught clarinetist influenced by music of Eric Dolphy and John Coltrane. The Gremlins had found him thanks to the fact that McCowen had in recent years gone to study with Mandat at Southern Illinois. The final work was “Short Sonata for Two Clarinets” by the prolific but now somewhat obscure New Zealand composer Antony Elton.

As was the case last year, Goodman and Fitzgerald’s musical chemistry was on target, holding the attention of the unfortunately sparse audience. The circular, bowl-shaped sanctuary of the Unitarian Universalist Congregation can, in a pinch, accommodate over 300 on one side, to which the performance was oriented rather than trying to play to a surrounding audience.

Despite the carpeting and other fabric that dominate the “bowl,” the sonics were clear and immediate. But even with the the pyramidal wood ceiling and vertical gypsum wall panels at the top of the bowl, there is no natural bloom to speak of in the room’s sound. Except for a failed side-to-side stereo reflection effect intended at one point in Flynn’s “Forms of Flight,” the duo made up for the room’s acoustical dryness with a winningly dynamic, detailed performance.