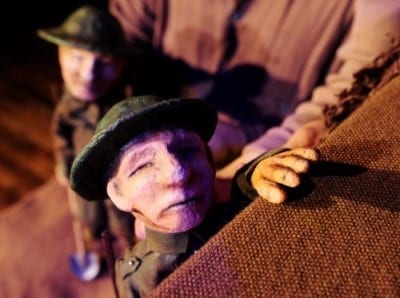 Review: The Great War and old souls in “A November Day” at Center for Puppetry Arts

“A November Day: A War Story,” at the Center for Puppetry Arts, is intimate to the point of being unnerving, so poignant is Kathy Kim’s puppet-musical memoir about her grandfather’s war experiences. Kim and husband Andrew — partners at Thingumajig Theatre in West Yorkshire, England — use family lore and research to re-create a World War I of muddy trenches, fleeting truces, brotherly love and shifting allegiances across a cruel no man’s land. “A November Day’s” weeklong run at the puppetry center concludes Sunday.

In the program notes, Kim explains that, as much as she tried, she couldn’t pry war stories out of her reticent grandfather, among the last of the dying breed of veterans of the Great War. “He’s a walking history book,” she observes of him, as the grumpy and bald 100-year-old figure creaks about the stage. “But he’s closed.” 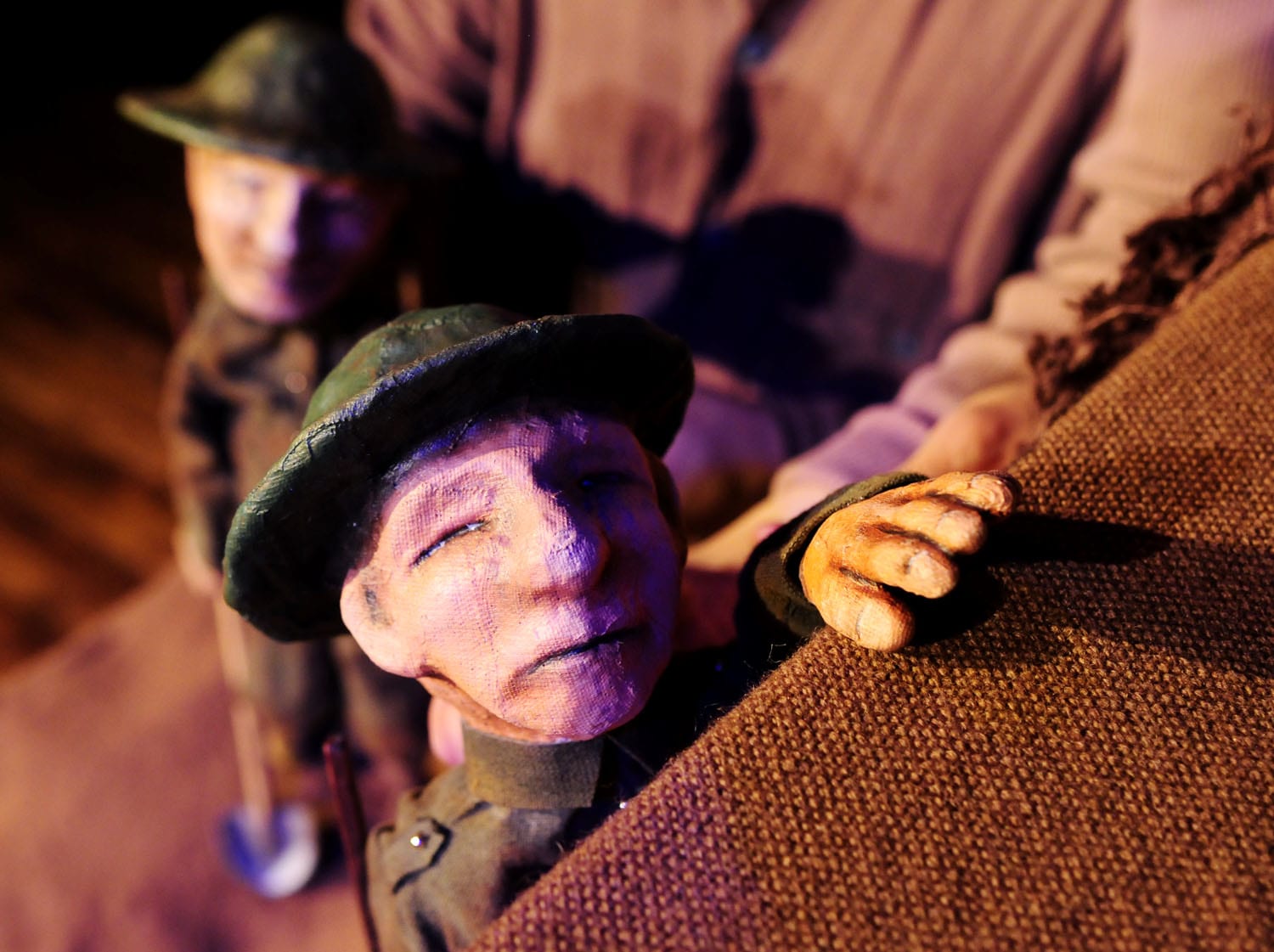 We should know why. World War I, appearing at the zenith of the Industrial Age, brought great technological innovation and greater devastation, and its horrors were incalculable because of whiz-bang mortar shells and the omnipresent barbed wire. And yet amid such massive destruction Kathy Kim has fashioned, with her partner’s puppets, a subtle work of sad beauty.

Everything builds before you notice it. The protagonist, John Bradley, and his kid brother Reggie grow from hand puppets to larger and larger figures — the soldiers almost reach life size. The Kims plunk away on a range of instruments with a childlike innocence: a toy piano, a harmonica, a kazoo, an accordion, a flute and what looks like a banjo-ukulele. By the time Kathy Kim has finished singing her almost whispered songs, you feel that she might have performed Great Britain’s entire World War I songbook: “It’s a Long Way to Tipperary,” “Pack Up Your Troubles in Your Old Kit-Bag, and Smile, Smile, Smile” and “Keep the Home Fires Burning,” to name the most familiar to a Yank’s ear. 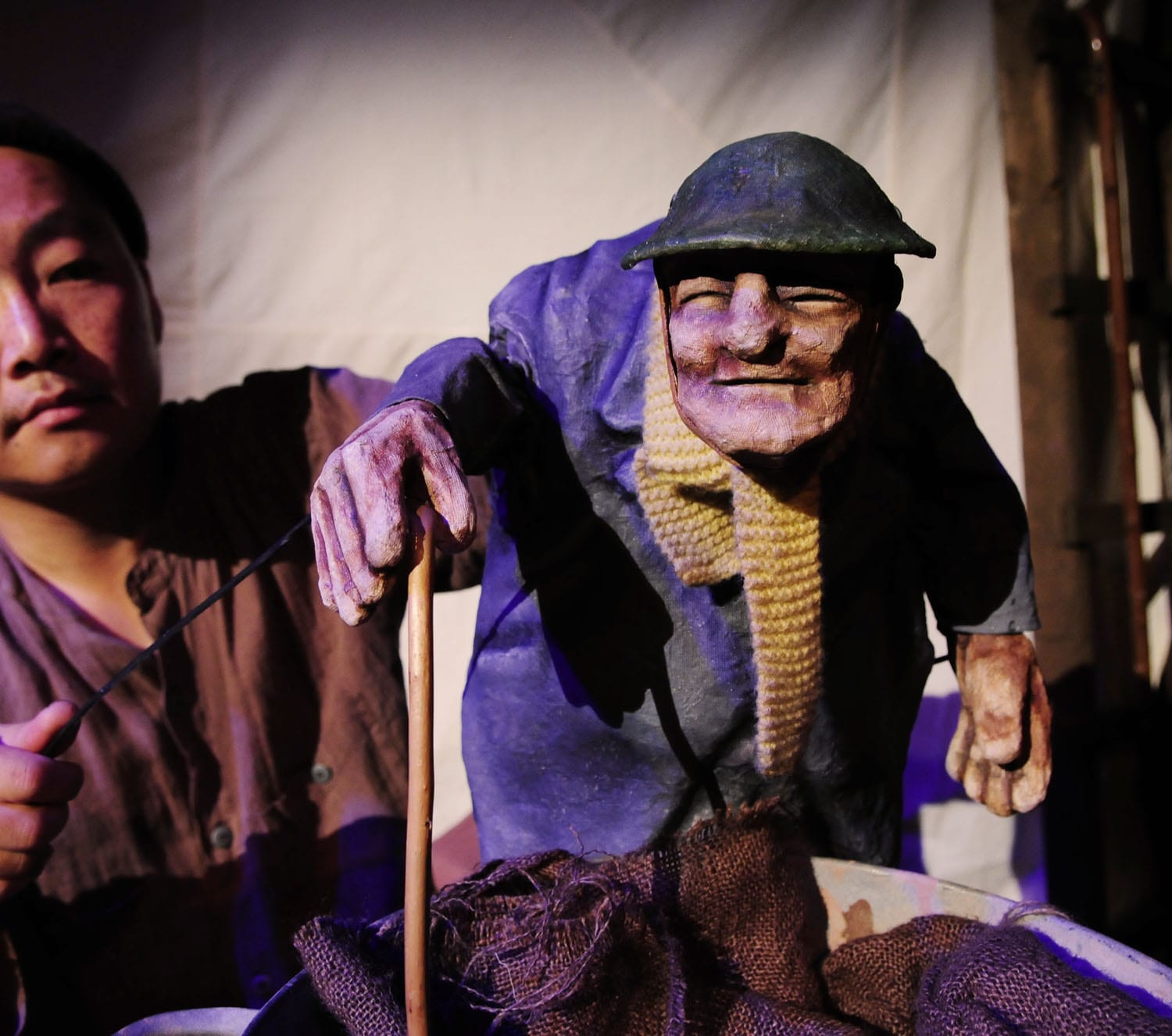 Everything is performed with the utmost economy, except the emotions. The Kims work quietly about the spare set in the center’s Downstairs Theater, sometimes changing puppet characters simply by shifting in their seats as they re-create John Foster’s time in the trenches. Some of the time he spends alleviating the boredom, and other times he and Reggie read (through Kathy’s mouth) letters from home. At other times they warily welcome the presence of a stray dog, whose motives and loyalty remain elusive until the very end.

Then there’s the moment when John, in the quiet of night, finds a call-and-response musical partner across the no man’s land, in a German officer, presented in the warm glow of a shadow. It evokes the true story of the famous “Christmas Truce” between two warring companies in 1914, and the flash of peace resonates throughout the room — until ensuing tragedy breaks the spell.

The Kims work seamlessly around each other. Andrew fuels the grandfather with little grunts and gasps as he moves the figure around, while Kathy maintains a clear-eyed innocence in her characters, all family members: granddaughter (herself), John’s mother, and a sister who later became a volunteer nurse. Whether in speech or song, it’s more tempting to watch Kathy Kim than anything handmade. The soldiers never speak, with Andy filtering their spare dialogue through a kazoo. We hear only from Kathy, and are soothed by her English accent. Andy’s puppets are lean and softened around the edges, the men’s eyes pinched into a squint. The grandfather reminded me a little of the old man in the animated film “Up.” Even as a young soldier, he bears an old soul.

Before you know it, the granddaughter has figured out the real reason for her grandfather’s reticence. As wrenching as war remains for those of us who keep waiting for loved ones to return home safely from the no man’s lands of Iraq and Afghanistan — which sometimes they don’t — she offers the soft landing of a requiem to send the audience out on a warm note. “A November Day: A War Story” is only an hour long, and therefore could be considered a fleeting experience. But the memories and emotions last long after the story’s end.

Kathy and Andrew Kim will present a workshop, “Turning History Into Puppetry,” from 11 a.m. to 1 p.m. Saturday, February 19. Admission is $25 for non-members, $20 for members.