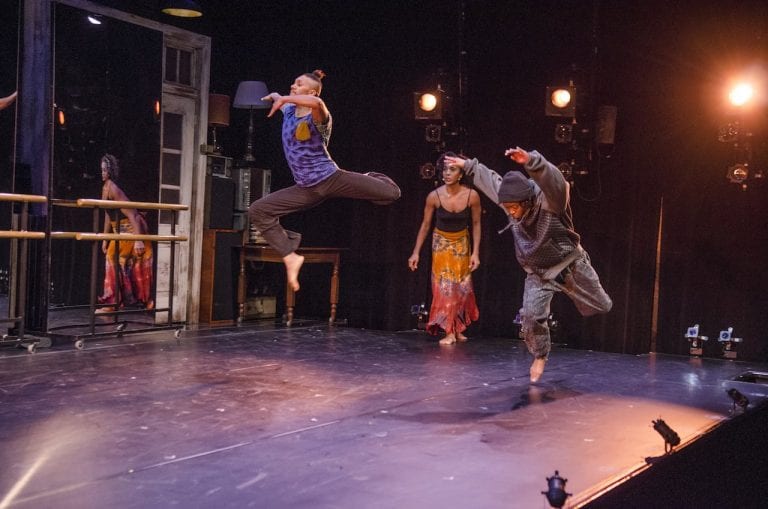 As incubators of new and influential work, the Alliance Theatre’s Kendeda National Graduate Playwriting Competition has introduced the city to some gems over the years, such as Tarell McCraney’s ensemble piece In the Red and Brown Water and David Robinson’s lovely family drama Carapace.

Despite a promising premise, this year’s winner, The C.A. Lyons Project, just isn’t in a league with those other plays. Ultimately it proves to be a clumsy, unsatisfying effort.

Running through March 8 at the Alliance’s Hertz Stage, The C.A. Lyons Project is a pet project for playwright Tsehaye Geralyn Hébert, based on a close friend who passed away years before Hébert entered graduate school.

It also marks a return to Atlanta for director Kent Gash, who acted as the Alliance’s associate artistic director for almost eight years before moving to start NYU’s Tisch School of the Arts’ New Studio on Broadway.

It’s the early 1980s and a headline captures the attention of C.A. Lyons (James Brown III), a dancer who has started his New Black Dance Company in Chicago. The headline speaks of a virus that seems to be sweeping through the gay community. The virus is initially known as GRID (gay-related immune deficiency).

C.A. is dating dancer Clyde “Pretty Boy” Wylie (Juel D. Lane), who quickly gets sick. But the muses in C.A.’s life are the women in his company. Amandla Sister Afrika (Francesca Harper), trained in African dance, is a friend, colleague and former lover.

Two others are starting to make a mark — ballerina Bethlehem Dunning (Tiffany Hobbs) and Christine, aka Chaos Unit (Danielle Deadwyler), a teenage girl who has moves of her own and plenty of attitude. Her style seems to be an early version of hip-hop.

Not sure if he will survive the epidemic that is killing people around him, C.A. has to think of where his company will be without him and make sure these three women can work together.

Choreographed by Dell Howlett and with an Alvin Ailey vibe, the dancing is indeed sharp and distinctive. The ensemble moves sleekly through its numbers, individually and collectively, suiting each dancer’s style.

Yet without dance, the play is just over an hour or so long — and pretty thin. It’s structured loosely and awkwardly and the characters aren’t deep. We don’t get to know the lead character well at all, nor his partner.

Each of the women gets her own subplot. Amandla has a supportive father (Keith Randolph Smith) but a homophobic mother (Donna Biscoe) who doesn’t approve of her professional life. Bethlehem has a deaf mother, Gracious (Michelle A. Banks), while Chaos is haunted over the loss of her own mother in a fire.

None of these stories add much, and a lengthy scene between Bethlehem and Gracious, filled with sign language, is so drawn out and overdone it becomes almost comical.

Working with Jason Sherwood’s mirror-laden set that bounces between the studio and the homes of the characters, Gash does what he can with the material and gives some scenes flair and purpose. The first act closes with a kind of beautiful, lyrical dance sequence.

Unfortunately, on opening night, this finale seemed like the play’s ending, and many in the audience were puzzled to find there was indeed a second act. What’s worse, the second act is barely over 30 minutes long and is fairly unnecessary. There’s no real reason this couldn’t have been a one-act show.

What could have been a fascinating play sprinkled with dance never fulfills its potential. Unfortunately, Hébert’s work becomes less about C.A. and the onset of the AIDS epidemic and how the virus devastates the dance community, than about the trio of women and their home lives.

The acting is sufficient, often very convincing, with two exceptions. Biscoe is a wonderful performer but she can’t make any sense of the character she plays, who spouts off to her daughter with such scripted venom she seems unreal.

To her credit, Deadwyler — an actress seen in everything from Aurora Theatre’s Clybourne Park to the Alliance’s Charlotte’s Web — manages to create a character out of young Chaos. Her mannerisms are so severe, though, that her Chaos throws her scenes out of whack, stomping out tirelessly and petulantly.

A great play could be made — and cries out to be written — about the outbreak of the HIV/AIDS crisis, told from the perspective of the African American community. The C.A. Lyons Project seemingly wants to do that but gets seriously off track along the way.