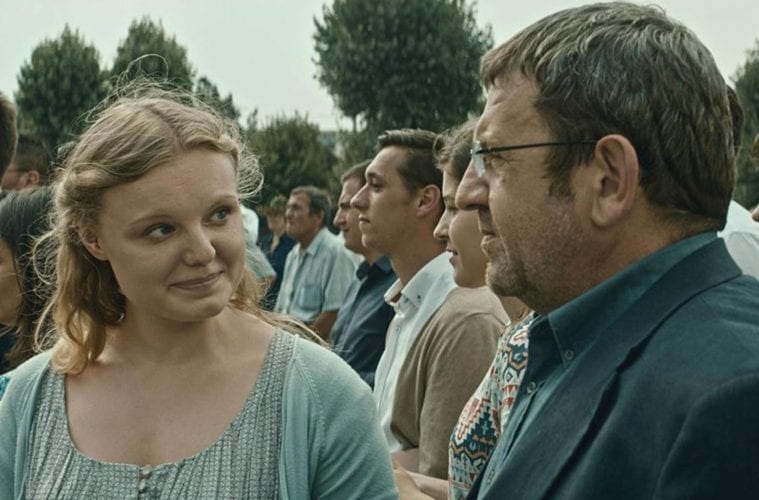 The small Romanian town of Victoria is a study in grays and browns — square brutalist housing complexes wrapped in a haze that creeps over muddy fields. As presented in Graduation, it’s a place you’d want to leave as fast as you can. That’s even before you start to sense the webs of corruption and cronyism that snare the townsfolk and, by implication, the rest of the nation.

The latest grim but beautifully made body-politic dissection from writer-director Cristian Mungiu, it centers on middle-aged doctor Romeo (Adrian Titieni). Married to Magda (Lia Bugnar), a woman grown as faded and ghostly as the town surrounding her, Romeo is pinning all his hopes on their daughter Eliza (Maria-Victoria Dragus; you may remember her as the spooky young girl in Michael Haneke’s The White Ribbon, now grown up).

A top student in her graduating high school class, Eliza has already been offered scholarships from two British universities, but with a proviso. Winning a scholarship hinges on her passing a final series of school exams with high marks. Unfortunately, a stranger’s assault on Eliza the day before the first exam rattles her enough to make her test badly. Desperate for his daughter to have the best chance to leave Romania and find a better life, Romeo does what everyone else in town does: he strikes some dubious bargains.

Sure, the chief of the examinations board can probably help assure that Eliza’s remaining exams will be graded on a favorable curve. In exchange, though, can Romeo bump the deputy mayor’s name up higher on the list of people waiting for liver transplants? And so, though he is formerly known as an upstanding figure (one of the rare doctors who doesn’t demand extra cash incentives from his patients), Romeo finally takes that first perilous step down the road of good intentions. Though he’s doing it for his daughter’s sake doesn’t exactly absolve him. After all, his actions could implicate her as well. The exam results — and how they’re achieved — could either give her a new future or taint her current life.

Writer-director Mungiu shared the directing prize at Cannes last year (with Personal Shopper’s Olivier Assayas). He also won the Palme d’Or, the festival’s top prize, 10 years ago for his riveting abortion drama 4 Months, 3 Weeks and 2 Days. His new movie shares that one’s unrelenting, procedural momentum. It thrusts us into a community — acting via a kind of hive mentality — in which no action lacks consequence or reaction. Even the detectives assigned to prosecute corruption have their own back-channel expectations.

The skill of Mungiu’s direction and his cast’s performances emerges in scenes of beautifully choreographed chaos: the welter of a police station, or the cross-purpose collision of worried family members and EMT’s converging in the house of an ailing old woman. The movie pulls off an almost documentary, social-realist feel, but it includes hints of the menacing, the unknown. Romeo thinks someone may be following him, and a window in his home and his car windshield are both shattered by an unseen assailant.

Some viewers may feel that Mungiu is all too successful at dramatizing this kind of no-exit landscape. And yes, the movie can get a little gloomy. The same could be said for the films of Russia’s Andrey Zvyagintsev (The Return, Leviathan), who also anatomizes his nation’s societal and bureaucratic corruption. Personally, I think both men are remarkable filmmakers, whose themes, unfortunately, remain timely and global.

If Graduation is ambiguous and gray, The Happiest Day in the Life of Olli Mäki is downright black-and-white. But that’s just the film stock Finnish director Juho Kuosmanen chose to tell his lively, fact-based tale, opening May 26.

Played by the pint-sized Jarkko Lahti, Mäki was a featherweight boxer in Finland (he’s still living). His big chance at worldwide fame came in a 1962 bout against the American, Davey Moore (John Bosco Jr.). Happiest Day follows Olli in the weeks leading up to his fight, practicing in the ring, battling to shed pounds to make his weight category, and being led to photo shoots and swank restaurants by his trainer, Elis (Eero Milonoff). It’s all a bit much for Olli, who’s preoccupied with a young woman he’s just met, Raija (Oona Airola, who looks a little like Marion Cotillard’s farmgirl cousin). Elis does everything he can to block the romance, fuming, “This is the shittiest moment to fall in love.”

Luckily for us, the movie is as interested in what happens between Olli and Raija as it is about what happened in the boxing ring. It’s black-and-white, a period piece, and it’s about boxing. But it’s no Raging Bull. It doesn’t want to be. If director Martin Scorsese was aiming for grand opera in his 1980 classic, Happiest Day is more like a breezy jazz riff.

The Happiest Day in the Life of Olli Mäki. With Jarkko Lahti, Oona Airola, Eero Milonoff. Directed by Juho Kuosmanen. In Finnish and English with subtitles. Unrated. 92 minutes. Opening May 26 at Landmark Midtown Art Cinema.