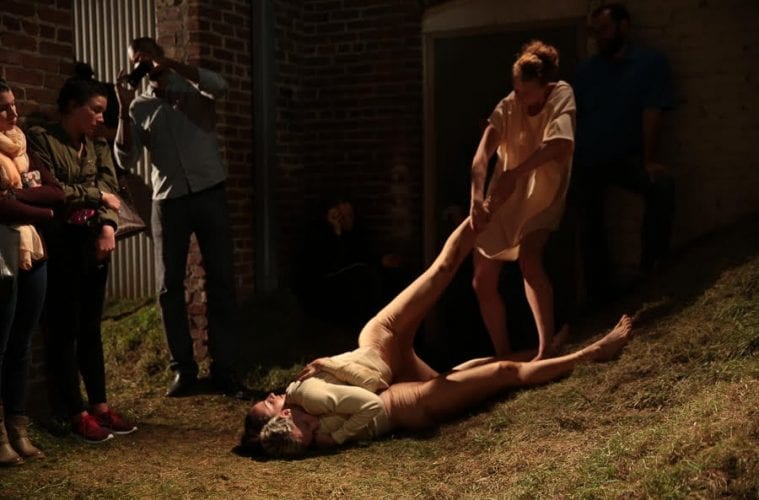 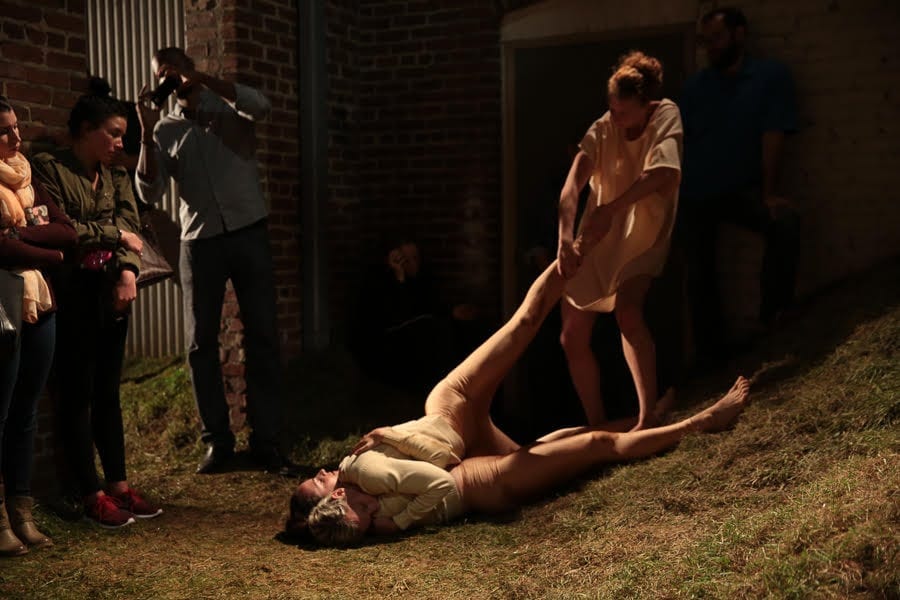 Laurie Stallings and glo continue to push the boundaries of modern dance. (Photos by Thom Baker)

A chime rang and two dancers faced one another in the center of a small, urban courtyard, heads inclined toward each other slightly, eye to eye. Kristina Brown raised her forearms, on parallel vertical lines, framing Anicka Austin’s face and echoing two stacked brick columns rising above the exterior wall.

Brown and Austin subtly veered around one another as if vying for the same point in space. Deflection gave way to full-body motion, and soon they were careening around the enclosure’s grassy slopes.

It was the start of an “activation session” during Search Engine, a temporary art installation created by choreographer and conceptual artist Lauri Stallings, and danced by her performance group glo.

Search Engine is Stallings’ first site-specific work at Atlanta Contemporary, part of a two-year project backed by the Goat Farm Arts Center. The installation aims to enliven the Secret Garden, a 500-square-foot “in between” space on Atlanta Contemporary’s grounds.

The installation ran 24 hours a day, October 11-17, and will remain on view during regular museum hours until December 12. Admission is free.

The initial performance ended Saturday, but glo artists will appear in several of what Stallings calls, “Movement Choirs,” inviting viewers to participate in simple movements — walking, running, skipping, etc. — while moving around the museum’s grounds. Dancers will also participate in some “Watering the Garden” sessions after the week of  October 19 as well as the installation’s “Closing Hours” December 11-12. Atlanta Contemporary’s website features a full schedule. 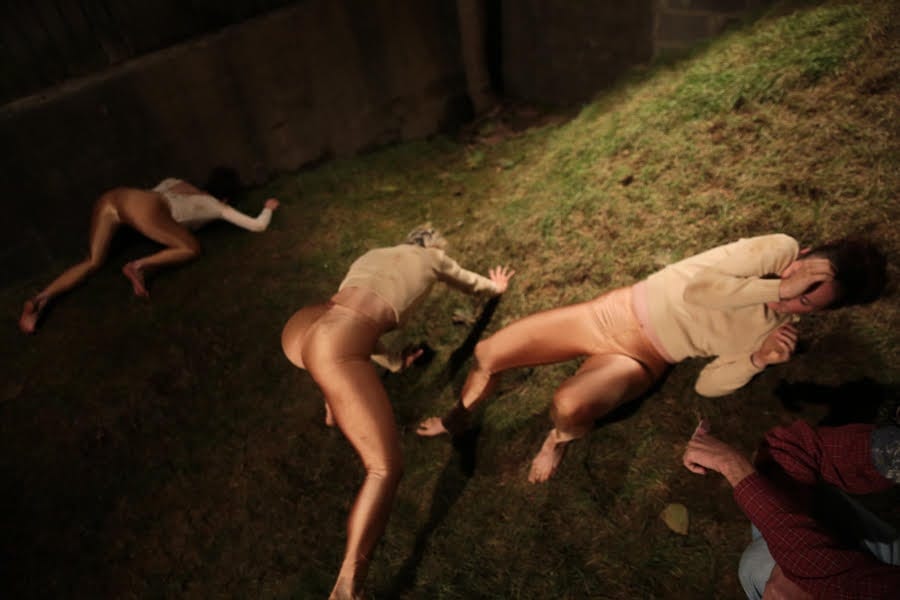 Dancers stayed overnight, performing when there was an audience to perform to.

Over the cracked concrete and between old brick and cinder block walls, the group has built a landscape of small, grassy mounds with a cedar-mulched path meandering through its trough, with a bit of stage lighting and composer David Wohl’s soundscape of singing birds. A series of cyclical dance structures gave form and pacing to the 24-hour, seven-day event.

It is glo’s first major work since And all directions I come to you, a series of six-hour outdoor performances in New York City, every Friday and Saturday for six weeks in May and June, in collaboration with Creative Time’s Drifting in Daylight series celebrating the Central Park Conservancy’s 35th anniversary. During the epic performance run, dancers traversed about 14 miles of paths and walkways through Central Park’s North Woods; viewers traveled about 10 miles in a single performance.

Search Engine took a seed of that experience and planted it in this tiny, neglected space in an attempt to transplant the wildness of the North Woods. The installation’s goal is in keeping with much of glo’s work, both in Atlanta and across the state: to perform in unused spaces, often involving at-risk historic sites, using human movement to bring people together within these newly enlivened spaces.

Search Engine also continued Stallings’ unflinching experimental thrust, investigating how altering dancers’ sense of day and night, and changing their sleeping and waking cycles, affected their artistry and state of mind during performance.

But here, it seemed, were two different purposes. Sometimes, the juxtaposed missions produced startling, mind-bending and beautifully human results. At other times, the effect was eerily strange.

Each day began at sunrise with daily meditation. “Activation sessions” began at noon, 4 and 7 p.m., lasting until the last audience members left, some as late as 3 a.m. The schedule also included various group activities including yoga, film screenings and smoothie-making. Two or three glo dancers remained on site overnight (guarded by a police officer) in case anyone came by, any time of day or night, to experience the installation.

Last Wednesday evening, around a dozen people waited in the space’s tight, rectangular interior, where grassy hills sloped upward toward brick and concrete walls. One long side was a retaining wall, about hip height, that served as a ledge to sit on. Above it stood a wooden stockade and chain link fences.

Opposite the fences stood a two-story brick exterior wall with a long, shallow slash of black tar across it, suggesting that a roof, now long gone, once sheltered the space. A volunteer tree, skinny but too tall to be a sapling, appeared to have sprung from a crack in the pavement years ago. Now about two stories tall, its trunk bent slightly off vertical over the chain-link fence, as if reaching for sunlight.

The roofless space seemed to generate upright forms that often angled slightly off vertical, like the lone tree. Movement often felt stiff and restricted, working from an open parallel position of arms and legs, limbs often slightly bent. On rare occasions the arms expanded wide into the body’s lateral space. Tension was also broken through long, unrestrained stretches of an arm upward, hand slightly closed in a loose, partial fist, as if holding seed, ready to scatter.

Early on, dancers stood, their upper bodies bent toward the ground, arms bending in front of the chest or reaching forward, even as their eyes remained on the ground. With slow, rhythmic and deliberate steps, they gently tapped the earth with the balls of their feet as if coaxing seeds to germinate and grow.

Then they would open out the upper body, spiraling toward the right and looking toward a high back diagonal, as if reaching back into the past. The motif repeated again and again — close to the ground on all fours, or facing each other.

They formed a “magic circle,” hands held. One dancer would spring into a lift, limbs held at right angles, then tumble onto the soft ground, yielding into its gentle curves. Or they would sit, soles of the feet together and their rounded arms crossed in front of the body, recalling an East Indian lotus mudra or the Wilis of the romantic ballet Giselle.

After around 10 p.m., a series of solos began, extending into the night. The space remained lit; the bird songs continued in the stage-lit darkness like an artificial day imposed upon the night.

It’s often the case in Stallings’ work when these hyper-aware beings — as attuned to their bodies as they are to everything around them — create the illusion that unseen forces, energies that dwell in a particular space, are suddenly made visible via the dancing body, like age-old visions of forest nymphs or sea sprites that inhabit a place in an altered sense of time.

In Central Park, it was as if these diaphanous-dressed, sylvan creatures had lived in the woods for a thousand years. But here the imagined became real. The dancers really were dwelling in the place, day and night. It was an uncanny clash of real and imaginary entities and events, and the effect was as strangely individual as the viewers who stayed the course.