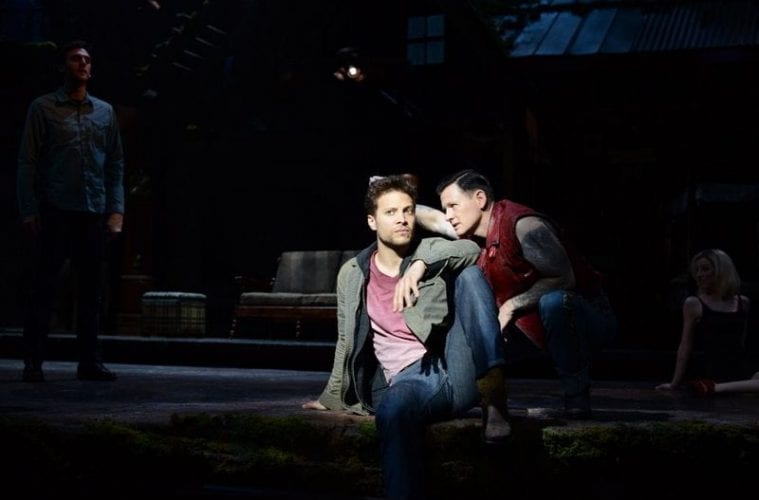 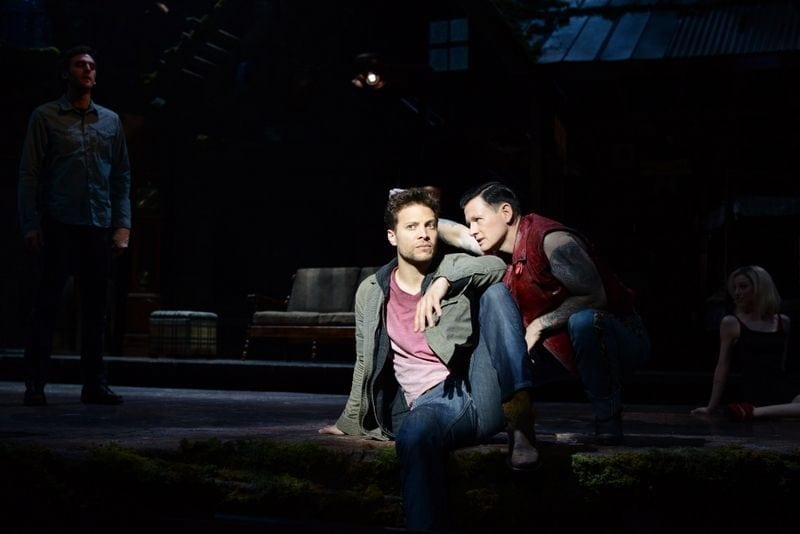 How rocker John Mellencamp and horror writer Stephen King came together to work on their pet project, “Ghost Brothers of Darkland County,” is an engaging tale in itself. But their highly anticipated Southern Gothic musical has finally opened, after 13 years in the works, at the Alliance Theatre. It has moments of jagged brilliance, and some superb music, but it’s quite a way removed from being polished.

In 1967 in the tiny town of Belle Reve, Mississippi, brothers Andy (Travis Smith) and Jack (Peter Albrink) — as well as Jenna (Kate Ferber), the girl who came between them — die horribly. The story of what happened to them becomes local legend. Forty years later, Joe (Shuler Hensley), the brother of Andy and Jack, is still the only one who knows what actually took place between his older siblings.

He is now married to Monique (Emily Skinner) and they have two sons, Drake (Justin Guarini) and Frank (Lucas Kavner). Both seem like normal young men having trouble getting along. Coincidentally, young Anna Wicklow (Kylie Brown) has come between them, just as Jenna did with Andy and Jack four decades ago. References to Cain and Abel are frequent between both sets of brothers. 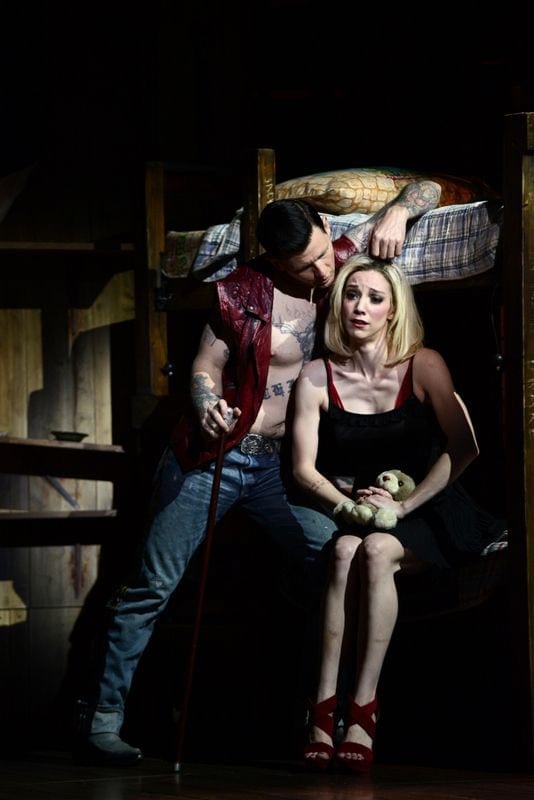 A visit to the family’s cabin in the woods seems like a nice idea, but said cabin is inhabited by the ghosts of Andy, Jack and Jenna. And in King’s work, of course, cabins in the woods — especially those with ghosts — never equate with peaceful, or bloodless, getaways.

Mellencamp got the idea for “Ghost Brothers,” which runs through May 13, from a true story he heard and pitched to King. It’s basically thin material, stretched well past two hours. The first act is a narrative jumble, often confusing and meandering, with flashbacks and meaningless scenes that don’t forward the story at all.

Many of the characters seem underdeveloped, as is the relationship between Monique and Joe. A devil-like character called “The Shape” (played by Jake La Botz) starts the show with the number “That’s Me,” and his appearances are just plain annoying. He pops up frequently and drains the life out of scenes.

Musically, however, “Ghost Brothers” has some stirring moments. Many of the numbers register, abetted considerably by Grammy and Oscar winner T Bone Burnett as music director. Of particular note are the gospel-tinted “How Many Days,” a good match for Hensley’s baritone, and Guarini’s and Kavner’s “Brotherly Love,” which they sing as they literally tumble over each other. The first act ends with “Tear This Cabin Down,” a hummable song in which the cast breaks out into an odd “Thriller”-like sequence.

But despite the occasional good song, the show feels flat. While Mellencamp’s rock sensibility is all over it, there doesn’t seem to be much of King’s. The story isn’t creepy or even darkly fun. Director Susan Booth does what she can with it, but even she can’t get much juice out of the early goings-on.

Joe has a dark secret, one that he doesn’t reveal until late in the show. What leads up to that is uninvolving and uneven. In the last 30 minutes, though, something clicks and “Ghost Brothers” absolutely finds its groove. The songs engage more (especially Hensley’s “What Kind of Man Am I?”) and the musical finally reaches a tone. For much of the show, “Ghost Brothers” doesn’t feel like a Stephen King offering, but a Grand Guignol twist seems right up his alley.

Technically, the show is superb. Todd Rosenthal’s set includes the atmospheric central cabin and a surreal cafe atop it. Adam Larsen’s use of projection and Robert Wierzel’s lighting create nifty visual effects, including some macabre, grisly ones.

Although they are not utilized as well as they could be, nothing is wrong with most of the cast. If Tony Award winner and local boy made good Hensley seems a little disengaged initially, he certainly picks it up and makes Joe a conflicted, wounded man. A Tony nominee herself, the lovely Skinner has one of the most memorable songs, the ballad “On Belle Reve Time.” Guarini, runner-up in the first season of “American Idol” and a Broadway veteran (“American Idiot”), is a surprisingly potent performer, while Smith stands out among the characters from 1967.

Many talented local actors round out the ensemble, and Royce Mann as young Joe, the only one who knows how the brothers died, makes the most of a few scenes. The antithesis of “The Shape” character seems to be Dan Coker (Christopher Morgan), who runs a cafe and offers friendly advice. Morgan has one of the best voices in the cast and a warm presence.

The Alliance has birthed a number of world-premiere musicals that have gone on to Broadway: “The Color Purple,” “Aida,” “Sister Act” and “Come Fly With Me.” Last year’s “Bring It On” isn’t on Broadway yet, but it’s only a matter of time before that one wins a few Tonys.

Few world premieres get it all right the first time. With some tightening and first-act restructuring, the ambitious “Ghost Brothers of Darkland County” holds exceptional promise. Die-hard Mellencamp and King fans will probably want to see it for the spectacle, but it’s not yet quite where it needs to be.