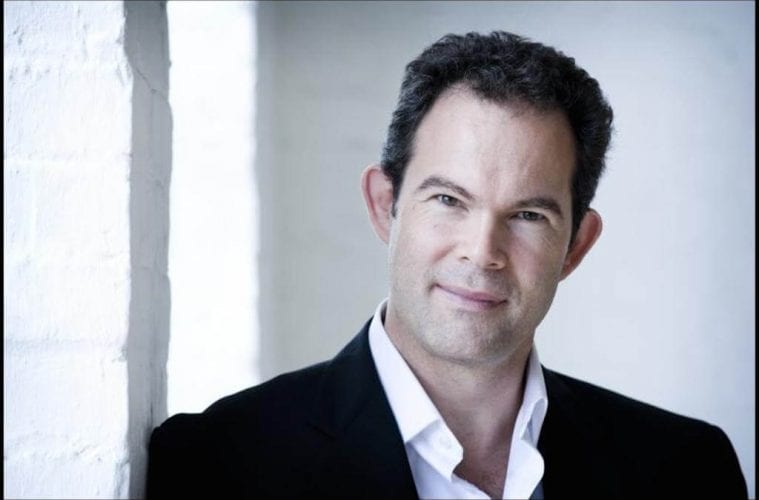 Gerald Finley, with pianist Julius Drake, holds nothing back in Spivey recital

With a repertoire best characterized as exhaustive, Canadian opera singer Finley is arguably best known for the role of J. Robert Oppenheimer in John Adams’ Dr. Atomic at the Metropolitan Opera. His recital at Spivey Hall was no exception. He and Drake performed lieder selections, dense and dramatic, exhibiting a world of vocal color and holding nothing back.

Most selections were fluent narratives or scenes such as Schubert’s “Prometheus,” D. 674. Here Finley’s voice opened up considerably. God-like and showing a full spectrum of sound, Finley characterized fire-giver Prometheus, who defiantly stands up to Zeus spewing a diatribe of insults. Heard early on, Beethoven’s stunning “Wonne der Wehmut” Op. 83, No. 1 was an anomaly. Containing just six lines and much text repetition, the song describes the bliss of sadness illustrated by the text painting within a highly independent piano line. Finley and Drake followed this with the highly entertaining “Aus Goethes Faust” Op. 75, No. 3 and several other often overlooked songs by the symphonic genius.

Finley’s face is surprisingly animated, and he has a knack for characterizing a variety of personages as he did within the iconic extended song “Der Erlkönig” Op. 1, D. 328, which closed the first half. This song is a bear for both the singer and the pianist and rarely performed live with such precision. Finley took on no less than four characters while Drake’s piano embodied a galloping horse and sometimes a singsongy ländler. It’s a frenzied tale of a father racing through the forest on horseback with his dying son in his arms as the elf-king (Death) pursues them. As the tempo became more frantic and the dynamic level rose, Finley startled the audience by actually reaching out to snatch the boy as he sang the words, “Und bist nicht willig, so brauch ich Gewalt!” (“And if you are not willing . . . I’ll use force!”)

The second half of the recital was dedicated to Russian bass-baritone Dmitri Hvorostovsky, who lost his battle with cancer last fall, leaving the musical world grief-stricken. It was a departure of sorts for Finley, who confessed to delving into the repertoire late in his career. (He carried his score onto the stage but didn’t refer to it much.) Roomy and broad, the output of these Russian composers provided the duo with the opportunity to indulge in “passionate outbursts.” Tchaikovsky’s “At the Ball” Op. 38, No. 3, a humble plea of love, was one of the selections best suited to Finley’s mellifluous talents.

But Rachmaninoff’s “Fate” Op. 21, No. 1 turned out to be the thematic and musical nexus of the recital. Within the text, Fate is personified by an old woman with a walking stick who makes a habit of interfering with human happiness. The piano, not merely accompaniment but elevated as a character within the story (like Schubert’s “Erlkönig”), repeatedly announces Fate’s arrival with a musical quotation, the theme of destiny from Beethoven’s Fifth Symphony. Finley used percussive consonants and generous legato within his masterful interpretation of Alesky Apukhtin’s tale.

The duo wrapped up the evening with a trio of folk songs, which included a raucous version of Benjamin Britten’s “The Crocodile.” Clearly the Spivey Hall audience did not want to see Finley and Drake go — especially my seatmate — who softly sang along with Finley for Ottorino Respighi’s “My Heart’s in the Highlands” as he stroked his beard.