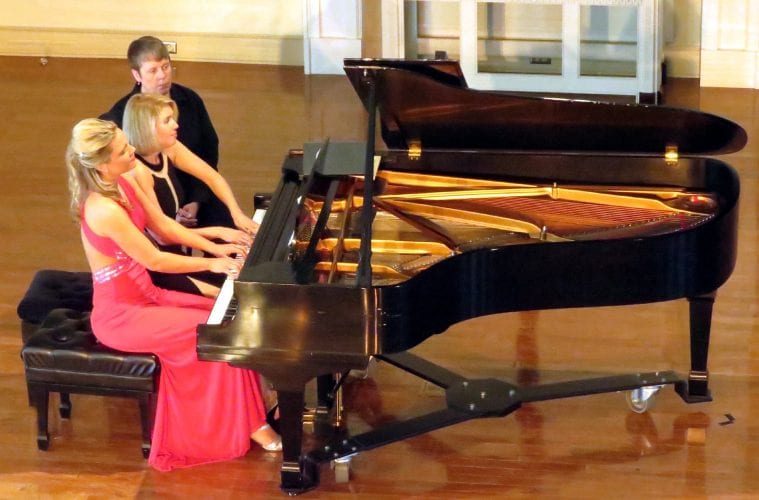 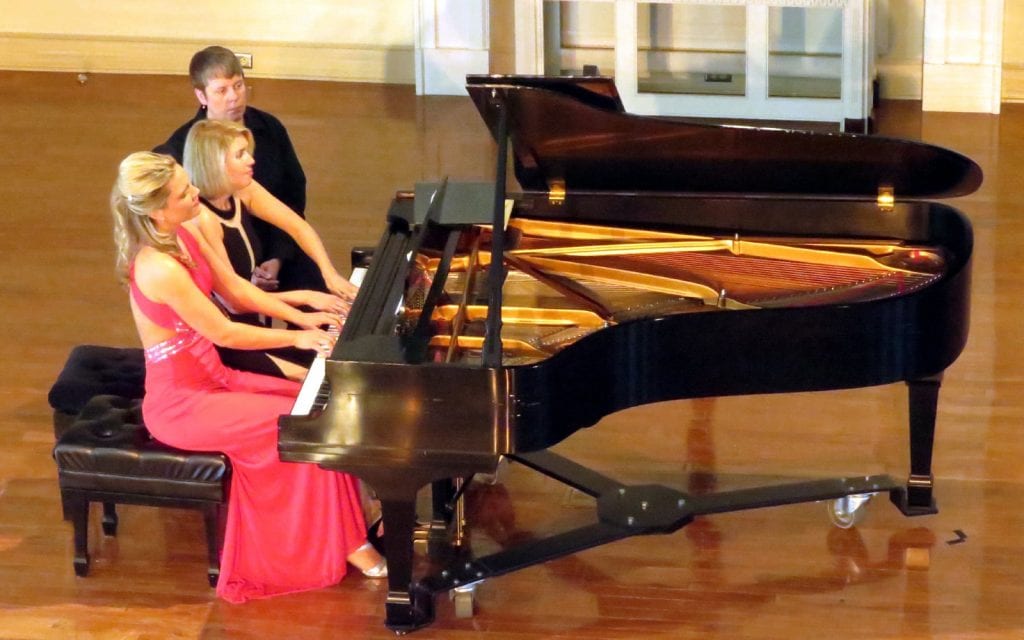 On Sunday afternoon, the Georgian Chamber Players performed a concert of music by Mozart, Rachmaninoff, Ravel and Brahms at Kellett Chapel on the campus of Peachtree Presbyterian Church in Buckhead. The performers were violinists David Coucheron and Ji in Yang, violist Reid Harris, cellist Christopher Rex, clarinetist Laura Ardan and pianists Julie Coucheron and Elizabeth Pridgen.

The pianists played the first half of the concert, entirely composed of works for piano, four hands — both originally composed for four-handed piano or transcribed that way. Although two-piano duets may have a more glamorous caché, they obviously require two pianos, preferably matching in make, size and tonal quality.

That’s something many venues, especially churches, do not have readily at hand. Additionally, the quantity repertoire for one piano, four hands, is vastly greater. Prior to the advent of audio recordings, during the 19th century and even into the early 20th, nearly every gentrified parlor sported a piano, and four-handed piano transcriptions were how orchestral repertoire was often first experienced, as well as being a social pastime.

In the latter half of the 18th century, builders of early pianos were flourishing. Likewise grew the instrument’s repertoire, not only for one keyboardist but also for two. Mozart and his sister played four-handed duets on tour as children. Mozart later wrote piano works for two pianists and by far the majority were for four hands at one piano.

It was one of those that was first up on Sunday’s program, Sonata in D major, K.381, written when Mozart was 16 years old. In a textbook classical fashion, the 15-minute piece featured spirited outer movements around a gently melodious middle one. 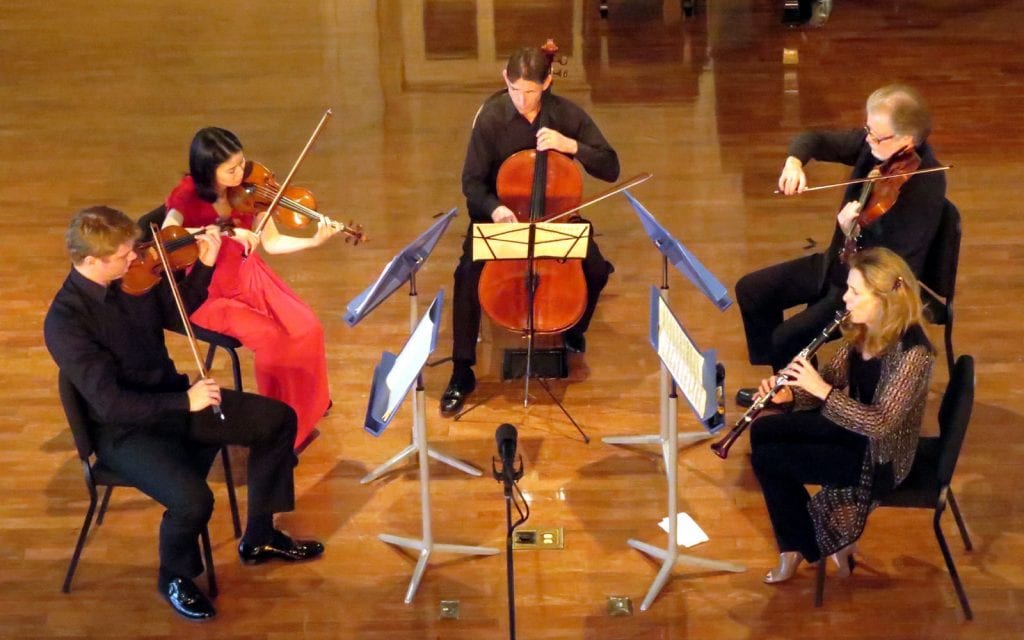 Next up was Sergei Rachmaninoff’s “Vocalise,” a high-profile classic which found its way into the ear of broader popular culture over time through many transcriptions as well as the composer’s original. The one played here was transcribed by piano duo Greg Anderson and Elizabeth Joy Roe.

Anderson and Roe can easily be compared to mid-20th-centuiry duo Ferrante and Teicher, who were known for their own arrangements of familiar classical repertoire, music from motion pictures and from musical theater. Coincidentally, Anderson and Roe met in 2000 while studying at the Juilliard School and forming their musical partnership while students — just as did Ferrante and Teicher in the late 1940s.

Coucheron and Pridgen concluded the first half of the concert with Maurice Ravel’s “La Valse.” Although Ravel was known for transcribing his own piano works to versions for orchestra, the opposite was the case with his “La Valse.” The music was originally orchestral, intended for ballet, commissioned by Russian impresario Sergei Diaghilev for his Ballets Russes.

But that production never happened, as Diaghilev considered the music “untheatrical” — something that forged an animosity between them. Instead “La Valse” became a successful orchestral concert piece, eventually becoming a part of the ballet repertoire in the 1950s via choreographer George Balanchine and his New York City Ballet.

Ravel himself made transcriptions of the work for two pianos, first publicly performed by the composer and Alfredo Casella, plus a rather difficult version for solo piano. A transcription for piano, four hands, was created by Lucien Garban and published by Durand & Cie (Paris). Garban was an arranger and proofreader at Durand, and a lifelong friend of Ravel.

All three duo piano works were winningly performed by Coucheron and Pridgen. Although hand crossings are not entirely uncommon in four-hand repertoire, it was in the pyrotechnical “La Valse” that these displayed the most showmanship, with instances of glissandi in the secundo part, which, marked dessous (played below the other pianist’s hands) extended nearly the entire length of the keyboard.

Of the modest amount of music for clarinet quintet (clarinet with string quartet), the two pillars of the repertoire are those by Mozart and Brahms, and Brahms largely modeled his after that of Mozart. It was Brahms’ Quintet in B minor that constituted the second half of the concert, performed by Ardan, David Coucheron, Ji in, Harris and Rex.

These same performers had already performed the slow movement last Thursday in Symphony Hall as part of a chamber music presentation in advance of that evening’s subscription concert by the Atlanta Symphony Orchestra. As in that performance, Brahms’ entire quintet was given a warmly attractive and mellifluous rendering.

[Full disclosure: The author of this review has composed music for clarinetist Laura Ardan that will be premiered later this spring.]