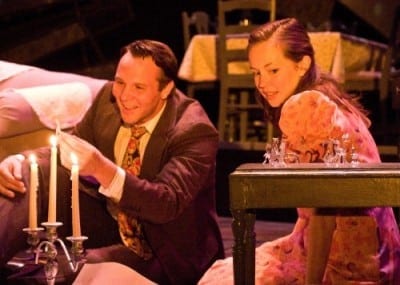 It’s a measure of the strength of last season’s production of the Alliance Theatre’s “August: Osage County” that, this season, the Weston clan seems to be everywhere, reshuffled into surreally different arrangements. Here we find the pot-smoking teenager and philandering fiancé, no longer lewdly flirting and sharing a hidden stash, but now recast as brother and sister polishing glass and escaping to the movies. Joe Knezevich and Bethany Anne Lind, who memorably flirted and smoked in “August,” now take on the roles of siblings Tom and Laura Wingfield in Georgia Shakespeare’s new production of “The Glass Menagerie,” playing through October 30. For tickets, click here.

“Menagerie” is a challenging play for many reasons. It’s a great work, possibly Tennessee Williams’ best, but many of its lines and situations have become overly familiar, perhaps even to those who have never seen it. Someone somewhere is always hearing about how easily glass animals can break for the first time, but that person and their fresh reaction have become as difficult to imagine as the person who has never heard Tiny Tim say “God bless us one and all.” And like other theatrical warhorses, “Menagerie” is not a show that takes well to tampering or reinvention.

The biggest risk in this new production is designer Kat Conley’s set, a wall-less and abstract take on the Wingfield apartment. It’s an admirable chance to take, especially since the attempt is to evoke some of Williams’ original vision for the play. The playwright imagined a screen for projection of text and images above the live action, but the idea was jettisoned for the first Broadway production and has not often been attempted since. Director Richard Garner wisely keeps the projected images few, subtle and backgrounded: they draw the viewer out of the play’s wonderful, almost claustrophobic intimacy, which is its primary strength. Although the device is a major part of the published script, it simply doesn’t add enough to merit its inclusion. If anything, it detracts.

The set itself is interesting in its abstract suggestion of pieces of broken glass shattering out from a tense, compacted center, but the design makes the stage too large, open and expansive. The confinement of three walls — Tom compares the place to a trap and a coffin — is needed to echo the emotional claustrophobia, and the classic jewel box shape in more traditional productions helps perpetuate the show’s central conceit: that the goings-on are somehow contained and controlled by Tom, in his memory, presented to us as “truth in the guise of illusion.”

Lind is a talented (and busy) young actress, as anyone who has stepped inside a metro Atlanta theater in the past couple of years knows, but here she is miscast. She’s too modern and robust for Laura. She gives us an interesting take on Laura’s idiosyncrasies, but not the more crucial, if drearier, aspect of the character: that she is one of life’s utter weaklings.

Mary Lynn Owen as Amanda has found that character’s iron will. Her defiant and exasperated final speech taunting Tom to leave is especially strong. Her fierce love and protectiveness of her children also comes through powerfully, and it’s all especially moving at the end of Act 1 when she calls Laura onto the fire escape to make a wish.

Travis Smith as Jim, the Gentleman Caller, conveys that character’s well-meaning blokey optimism: his misguided attempt to instruct Laura in how to win friends and influence people achieves an almost Chekhovian level of absurdity. Knezevich weighs down his portrayal of Tom’s clear desire for escape with a sense of his genuine love for his sister. He also reads Williams’ best lines well, effortlessly speaking the poetic, metaphorical language that gives the play its real reach.

But even with a talented cast, there is still something missing, and the goings-on remain lackluster. The opening of Act 1 feels rushed, which creates problems that stick and pervade even when the action develops a more measured pace in later scenes. The characters end up seeming simultaneously too familiar and too far away. Although there are wonderfully moving, and even inventive, moments in this production of “The Glass Menagerie,” as when Tom and Laura lock eyes for Tom’s final monologue, ultimately the show is lacking in fresh, heartfelt earnestness, which is crucial for keeping an old warhorse like “Menagerie” from shattering like glass.