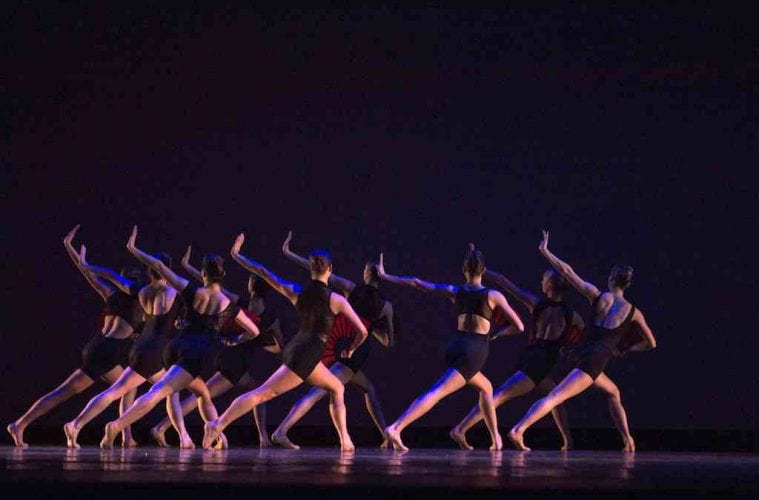 Review: The Georgia Ballet turns its slow-motion fall into a beautifully nuanced “Renversé” The Georgia Ballet made a stirring return to the stage. (Photos by Katilyn Pack)

In classical ballet, the term renversé has been defined as “the bending of the body in a turn, in which the normal balance is upset, but not the equilibrium.” The step is often done with a circular sweep of a leg from front to back, slowing as it bends behind the body while opposite arm and upper body incline toward the audience then return upright to complete a full revolution.

The tight and confident troupe presented a range of classical, neoclassical and contemporary works on a strong technical base, perhaps influenced by Fairrie’s Royal Ballet training. The dancers’ newfound, soft port de bras and expressive use of head, upper torso and shoulders — as well as long, clean balletic lines — showed that classical ballet remains a resilient framework for endless stylistic variation.

Among the program’s standouts was Lisa Lock’s Under Current. Lock’s work is as much classically based contemporary ballet as it is visual art. As one of the evening’s strongest compositions, it captivated the eye from start to finish. Posed against the ensemble, Owerbach and Burns imbued lifts and supported leans with a sculptural feel, without losing a sense of line. As the pair slowly moved together, the corps of dancers traveled across the space in a series of traveling rises and falls with strong attack and visual lilt.

Johnson has been a major force in the rise of Lauri Stallings’ collaborative performance group and has danced in unusual situations — under torrents of water in an unfinished Castleberry Hill building; in a pile of shredded silk flowers at Goodson Yard; and amid rush hour traffic on Peachtree Street in Midtown.

For this performance, Johnson stood in silhouette against a dimly lit cyclorama with the sound of cars zooming by on a busy street. Griswold, kneeling close to the audience and warmly lit, moved his hands as if holding something invisible and precious.

To the sound of a woman’s voice in plainchant, Johnson and Griswold moved through sculptural shapes that vaguely recalled medieval bas-reliefs. The pair changed shapes with facile fluidity; their warmth and roundness gave the movement both visceral and spiritual dimensions.

They wobbled on and off-balance. Griswold cradled Johnson’s head. At one point, Johnson shook her hand and tossed it to the side, as if rolling dice — suggesting a reflection on risk, mortality and the value of human life. Their movement invention is ever mesmerizing; Fly on the Wall is a rarified and welcome voice in the community.

Georgia Ballet newcomer Brittany Shinay, a Juilliard graduate and former principal dancer with the Rochester City Ballet, joined with guest artist Sam Chester in the pas de deux from Le Corsaire, a staple of the classical repertoire. A syrupy start gave way to genuine naturalness on stage — even an occasional touch of humor — as they tossed off technically challenging turns and lifts with bravura.

Jamey Leverett’s Push and Pull bridged the neoclassical and the contemporary. With mechanized urgency and mercurial thrust, dancers lunged and reached through stage crossings. They linked arms, pushing and pulling one another in patterns that spread across the stage, culminating in an overhead lift that looked as if the woman, while turning and leaping, was stopped in midair.

It’s not a surprise — but a relief — that the Georgia Ballet has rebounded so gracefully with Renversé. Music credits in the program would have been helpful, but dancers’ confidence, technical purity and expressiveness overshadowed that detail and proved that although the troupe may have spun off-kilter, it is back on its feet and as strong as ever.