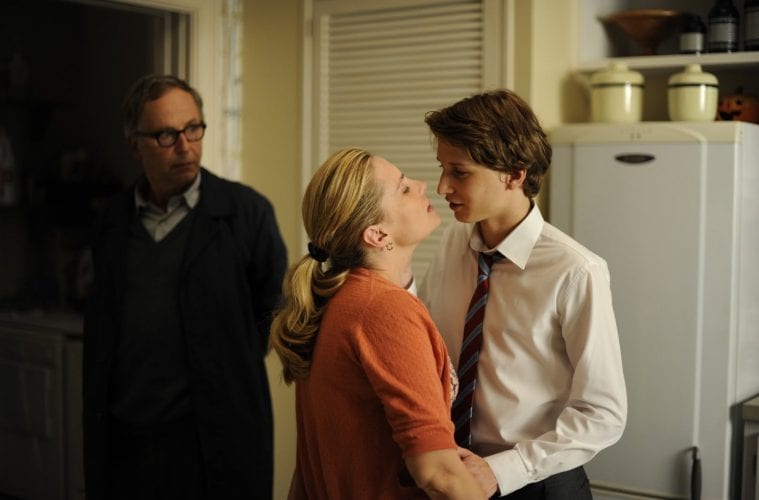 “In the House” uses deft sleights of hand to craft its story.

As he showed in “Under the Sand” and “Swimming Pool,” French writer-director François Ozon is fascinated with the elusiveness of “reality” and the seductions of storytelling. The gifted, unpredictable filmmaker further explores these themes in the sometimes comic, sometimes sinister “In the House,” a witty hall of mirrors.

Fabrice Luchini plays Germain, a middle-aged composition teacher at the Lycee Gustave Flaubert, who complains to wife Jeanne (Kristin Scott Thomas) about the idiocy of his sophomore class. As proof, he reads from one student’s what-I-did-last-weekend essay: “Saturday I ate pizza and watched TV.”

Things change when he checks out the assignment from 16-year-old Claude (Ernst Umhauer), a motherless latchkey kid. Claude writes of his obsession with the seemingly perfect suburban home of a classmate, which he stares at for hours from a bench in a nearby park. The classmate is Rapha (Bastien Ughetto), a nice, gangly fellow whose difficulty figuring out his math homework is just what Claude, a whiz with numbers, needs to get himself invited into the house.

Both Germain and Jeanne are alternately amused and dismayed by Claude’s ongoing, serialized depictions of Rapha’s family. He sketches a gauche, gung-ho father (Denis Ménochet) and a mother (Emmanuelle Seigner, Roman Polanski’s muse and wife) whom Claude describes with lust and contempt as “the most bored woman in the world.”

Like the novels “Wonder Boys” by Michael Chabon and “The Finishing School” by Muriel Spark, the movie’s plot hinges on a teacher with faded literary ambitions confronting a student who has more talent than he did. Germain decides to take Claude on as a personal case, giving him one-on-one tutorials about the rules of good writing. The two develop a symbiotic — or is it parasitic? — relationship. While Germain automatically thinks that all, or most, of Claude’s story is a fabrication, as we watch it enacted onscreen, we can’t be sure. Seeing may be believing, but are we believing the “truth?” Repeated references to Scheherazade are a reminder that storytelling can be a life-or-death situation. But it’s hard to predict here whose heads risk getting chopped off — the teller of the tale or the tale’s readers, Germain and Jeanne, as they follow Claude’s story with voyeuristic interest. (There’s enough quietly simmering, multidirectional eroticism at play in the suburban house of Claude’s serial that Germain comically asks the boy, “Is this Pasolini?”)

After a few interesting but lopsided movies (“Angel,” “Potiche”), Ozon is back in sharp form. “In the House” is crisp, swift and surprising, challenging us to keep up with the flood of information at the start, propelled by longtime Ozon collaborator Philippe Rombi’s antsy score. In an amusing subplot that reinforces elements of the plot, Jeanne is struggling to keep open the doors of the art gallery she manages, The Minotaur’s Maze. As she tries to discover what people will actually buy, her exhibitions shift from sex-drenched provocations to minimalist sky photos to fair-trade tchotchkes from around the globe.  (“Seraphine” star Yolande Moreau turns up times two in a cameo as the bumpkin twins who hold the fate of Jeanne’s gallery in their clumsy hands.)

As Germain, Luchini makes a wonderful, flawed everyman who means well but misses crucial red flags. Scott Thomas, as always, blends cool intelligence with a sense of humor. And Umhauer is terrific as Claude, his face seamlessly shifting from angelic to cunning; he’s like a younger, Gallic version of Patricia Highsmith’s talented Tom Ripley, but with heart.

“In the House” isn’t perfect. An unavoidable problem comes with a movie like this, which constantly shakes up the rules and makes fact and fiction permeable. In the final minutes, “reality” has become so slippery that you’re ready for just about any ending, and no single one could possibly feel like the right one. “In the House” doesn’t quite land with the satisfying click you desire. But, like the maze for which Jeanne’s gallery is named, it’s a fascinating place to get lost in for two hours.

If “In the House” is your first exposure to movies by writer-director François Ozon, you might be interested in a few of his others. Find out our reviewer’s other recommendations here.