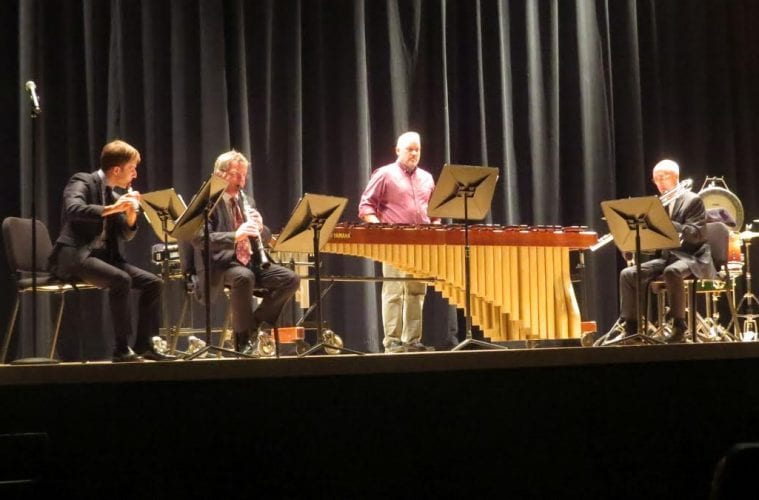 On Thursday evening at the Rialto Center for the Arts, Georgia State University’s neoPhonia New Music Ensemble presented tête–à–tête (literally “head-to-head” but more meaningfully “private conversation”) as one of the cultural offerings of France-Atlanta 2017. The program was a mixed bag of 20th- and 21st-century solo and chamber works that included a pair of commissioned world premieres, one by French composer Philippe Hurel and one by American Atlanta-based composer Nickitas Demos, who is also neoPhonia’s artistic director.

neoPhonia has what one might call an “open roster” of musicians, drawing from GSU faculty and students and professionals outside of the university as needed for each program. For this particular concert, a half dozen professional musicians, mostly contemporary music specialists, were drawn together from diverse ensembles for the occasion. From Paris, France, flutist Patrice Bocquillon and clarinetist Dominique Vidal, both of Ensemble Fa, who are friends and colleagues of Atlanta-based flutist Matthieu Clavé, who is a member of Chamber Cartel, as is violist Sprite Crawford. Also included were flutist James Zellers, principal flute of Atlanta Opera, and percussionist Stuart Gerber, co-artistic director of Bent Frequency, the only GSU faculty member among the six.

The concert opened with the oldest piece on the program, “Syrinx” (1913) for solo by Claude Debussy, performed by Clavé, Zellers and Bocquillon in an interesting arrangement for three flutes subtitled “mise en résonance pour trois flûtes,” intended to reveal the subtle harmonies implied by the original solo. “Syrinx” is the Greek word for “panpipes,” and the piece was originally intended to accompany a scene depicting the death of Pan in Gabriel Mourey’s unfinished play, Psyche. It is reputed to have been the first unaccompanied composition for the modern Böhm flute and quickly became an indispensable part of solo flute repertoire. The gently undulating piece offered up an ethereal start to the evening.

In contrast was the first of two world premieres, “Trois études pour Atlanta” for flute and percussion by Philippe Hurel, performed by Clavé and Gerber. Curiously, no program notes were provided in the program for this piece, written over the summer, although a biography of Hurel was included. The piece is briefly mentioned in Hurel’s French online biography, but not in the English version. Suffice to say that it is a busy piece in the lineage of the French avant-garde. It was one of the two highlights of the evening.

The program continued with a pair of unaccompanied solo works from 1984, both stylistically typical of academic contemporary music of that era. “Distances” by Jean-Paul Rieunier was performed by clarinetist Vidal, and Salvatore Sciarrino’s “Hermes” was played by flutist Bocquillon.

In contrast was the 1956 “Miniature Suite” by Gordon Jacob, an English composer whose instrumental works, particularly for wind band, had established a solid footprint within repertoire played by public school and collegiate ensembles. The four movements of the suite for clarinet and viola, performed by Vidal and Crawford, have a particular charm in their intimate scale. The slow second movement in particular favorably compares the colors of the two instruments; the final movement, a spunky two-part fugue, concludes the piece on a cheery note.

Then Bocquillon and Crawford teamed up for “Lasting Virtue” for flute and viola by Ferdinando de Sena, a piece also heard earlier this year in the 2017 SoundNOW Festival as performed by musicians of Chamber Cartel — presumably Clavé and Crawford.

The concert concluded with the second world premiere (and the other highlight) of the evening, “inconsequential intricacies” by Nickitas Demos, for two flutists (Clavé doubling on piccolo, Bocquillon playing bass flute), clarinet (Vidal) and percussion (Gerber, playing vibraphone and marimba). Like Hurel’s “Études,” it is a busy piece, complex in its detail, but differing greatly in individual style and musical language. Noteworthy is the prominent role of the bass flute, which has a solo and often serves as a stable presence amid the work’s often complex contrapuntal details.

The concert was originally scheduled to take place at the university’s Kopleff Recital Hall. That it wound up in the Rialto was a matter of what is becoming an increasing creative conflict in Atlanta. A film crew was scheduled to use the front entrance of Kopleff Hall on the same night, which made it impossible to use for this concert, with the primary point of audience access denied. That’s why the program was relocated to the less suitable, much larger, Rialto, where the softest dynamics at times vanished. The intimacy was dampened somewhat by not only the venue’s size but also the vast theatrical curtain that loomed behind the performers. Hopefully, next time the priorities of Hollywood will not intervene.