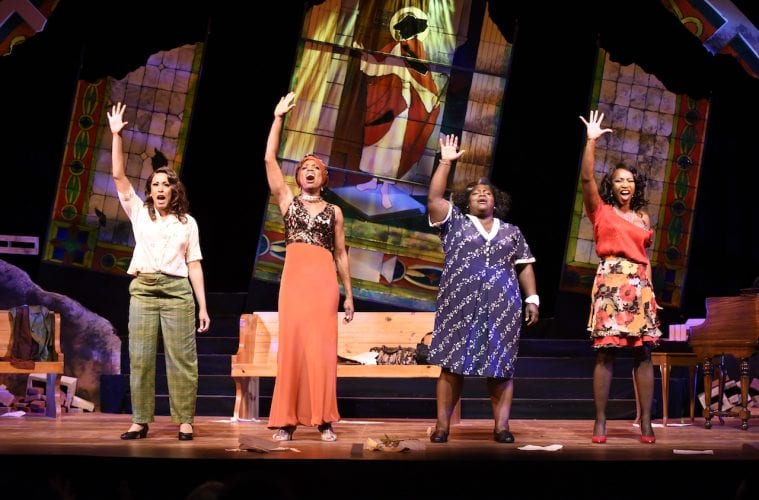 “Every day, I must conjure myself into a queen because the world will never give it to me.”

There are four black women at war within Nina Simone’s psyche: a domestic, an activist, a whore and her public persona — a haughty, classically trained pianist and singer who is destined to sell out shows at Carnegie Hall. Their paths cross in the hot bed of the Civil Rights Movement, and they must figure out a way forward together. Christina Ham’s musical Nina Simone: Four Women, under the direction of Michele Shay with musical direction by Christian Magby, is onstage through October 21 at Kenny Leon’s True Colors Theatre.

The musical features five of Simone’s iconic black consciousness songs, including “Old Jim Crow,” “To Be Young, Gifted and Black,” “Mississippi Goddamn” and of course “Four Women.” Throughout the show, Simone grapples with the dual consciousness of singing onstage in glamorous gowns while black people are slain in the street. It’s the same as being a black person in college, working as a CEO or selling out arenas while unarmed black people are killed for any reason.

At the top of the show, Simone is playing a lovely cover of “I Loves You, Porgy” on the piano at a dark Atlantic City night club and then a bomb goes off at 16th Street Baptist Church in Birmingham, and it rattles her conscience. She is transported to the scene of the crime, a church that has been blown to shards of glass and bricks that have disintegrated into red clay. She finds herself confronted by a dark-skinned maid named Sarah (Adrienne Reynolds), who has gotten caught up in the riots on the way to work; Sweet Thing (Jordan Frazier), a medium-complexioned slick-talking hooker; and Sephronia (Wendy Fox Williams), a light-skinned activist who is on the front lines marching for civil rights.

Let’s just get it out of the way — all of these women can sing, and Frazier is a standout. They also look the part in costumes by Fontella Boone. Regina Marie Williams portrays Simone, a role she originated at Park Square Theatre in St. Paul, Minnesota, where the play premiered in 2016. Her sultry, jazzy voice is sometimes more Eartha Kitt than Simone, but she’s clearly studied the singer’s gait, mannerisms and inflection and delivers a fine portrayal of the troubled songstress.

The ensemble is strongest in the moments when they sing together, like in the renditions of “Sinner Man” and an original song, “Shout Oh, Mary.” This is essentially a Nina Simone jukebox musical, and Ham stays true to the genre — disjointed plot and dialogue is only there to get to the next song — but Simone’s poignant lyrics make her jukebox heavier than ABBA or Queen.

It is also worth noting that though autobiographical information about Simone is peppered into the script, this musical focuses on Simone’s transition from covering popular songs to writing what she referred to as “black classical music.” There is a marked difference between Simone’s music pre-1963 and post, and Ham wastes no time confronting colorism, gender, racism and images of black women in media in the script. Simone’s music still resonates, and particularly with Black women who recognize her struggles.

Ham is a core writer at the Playwrights’ Center, the Mellon Foundation Playwright in Residence at Pillsbury House Theatre and a writer on the Netflix horror series Chilling Adventures of Sabrina. In Four Women, ideological conflict begins as soon as they encounter each other. Their disagreement is age-old — Sarah reminds them of the mothers they resent for raising white people’s children instead of them, Sephronia has the coveted light skin that they believe lends her privilege and Sweet Thing falls into the stereotype of black women as “loose” and a threat to their respectability.

Simone must reconcile that they all have paid a price and also figure out where she fits. Ham does a nice job of relaying the frustration of an artist who knows that she will face unnecessary hardship in reaching her highest potential because of racism. She writes, “If you’re not in the spotlight, you’re in the dark,” recalling Simone’s hyper-awareness that black women were not the focus of the civil rights or women’s liberation movements.

Born in Tryon, North Carolina, as Eunice Waymon, Simone was the daughter of a musician/handyman and a preacher/maid. She started taking piano lessons at age 5 and dreamed of studying at the Curtis Institute of Music in Philadelphia, but she claims she was denied admission because of racism. Her family had already moved to the Philadelphia area, and she changed her name so that her conservative mother would not know that she was performing in piano bars and supper clubs. She got her first record deal in 1957, and her first album under Colpix Records, The Amazing Nina Simone, was released in 1959 featuring searing covers of jazz standards. Her live performances soon became a hot ticket, and she started singing in the largest jazz clubs in the country. Her career shifted in the early 1960s after the murder of Medgar Evers and the bombing of 16th Street Baptist Church in Birmingham.

By 1963, Birmingham was often referred to as “Bombingham” because of the number of bombs being set off by whites in black neighborhoods. The 16th Street Baptist Church bombing on September 15, 1963, was not the first bombing in the city that week, and in the days following, two black boys were killed — one by a police officer and the other by a white boy who was anti-integration. The bombing spurned the passage of the 1964 Civil Rights Act.

Kat Conley’s set design is a beautiful tragedy that makes sitting before it for 90 minutes uncomfortable and necessary. It’s absolutely stunning when the curtain drops to reveal shattered stained glass with the face of Jesus blown away and piles of rubble scattered across the stage. The four women, who perhaps represent those four little girls who never had the chance to become, challenge Simone to ask herself what she is doing to advance the fight for civil rights.

Simone was certainly more Malcolm than Martin, and her music started to reflect that from the mid-1960s to when she made her last studio album in 1993. She passed on April 21, 2003, in southern France, but her discography is very much alive. She has been the subject of much public fascination as the Civil Rights Movement has approached its 50th anniversary. The Netflix documentary What Happened Miss Simone? explores the highs and lows of her career; a biopic starring Zoe Saldana caused much controversy over colorism in casting; and an album, Nina Revisited: A Tribute to Nina Simone, features covers of her songs by Lauryn Hill, Mary J. Blige and her daughter Lisa Simone. She was inducted into the Rock and Roll Hall of Fame earlier this year, and Ham’s play is another attempt to chart the artist’s territory.

Her message certainly resonates today — hundreds gathered for the March for Black Women in D.C. and New York City last weekend. Their demands included reauthorization of the Violence Against Women Act and focus on intersectional women’s rights. In Ham’s view, Simone was thinking about these women when she wrote her songs so that they would have a soundtrack that reflected their experiences. There’s something arresting about Nina Simone: Four Women, and a talented cast makes Ham’s cry for black women to lift each other up loud and clear.