Let us welcome “Four Coats,” a new mural project sponsored by the city of Atlanta to enliven the city and promote its art scene.

For the inaugural run of this planned annual effort, four galleries in different parts of the city — Beep Beep, Get This!, Marcia Wood and Whitespace — each selected an Atlanta artist or group to create a mural in their general vicinities. I like the neighborhoody aspect of the program. The scale is more intimate, and it allows for personal quirkiness in the designs. Each mural is something of a surprise in its location, and each changes the way we experience that place. Urban character is an accretion of such moments.

When I visited the mural sites, I noticed only one descriptive plaque. Hopefully, that deficiency has been addressed. Otherwise, the project seems like a winner. 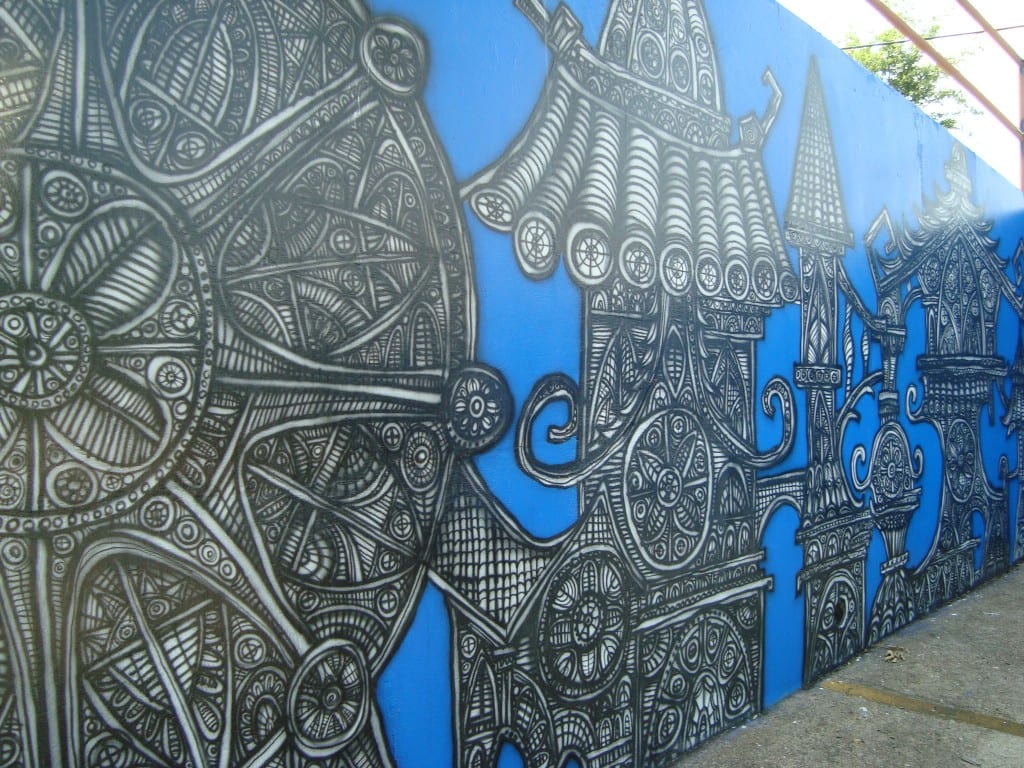 The four murals and their artists are:

Andy Moon Wilson. Sponsored by Get This! Wilson adapts, with aplomb, the intricacy and detail of his tiny line drawings to mural scale in this architectural fantasy, in a commercial strip in the Westside Arts District. He limns a series of fanciful structures, set off by a brilliant blue background, that are rich in associations, from Gothic churches and Japanese pagodas to Howard Finster’s heavenly cities. 670 11th Street N.W. 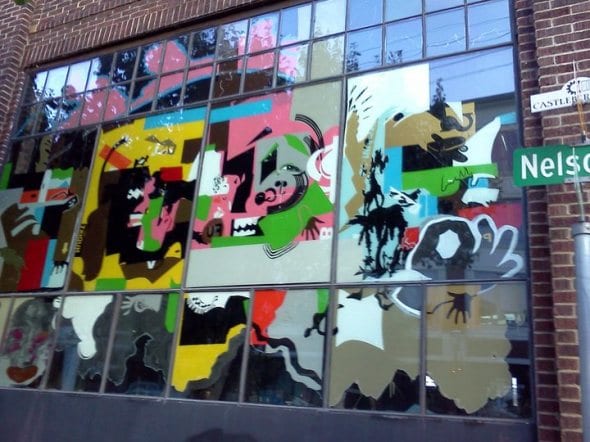 Sunday Southern Art Revival. Sponsored by Marcia Wood Gallery. This collective — Jesse Cregar, George Long, Michi Meko, Mario Schambon and John Tindel — makes use of the windows that wrap around two sides of a Castleberry Hill storefront. The colors are bright and inviting: Lilly Pulitzer’s pink and green, lemon yellow, shots of red and black for contrast. A mix of collaged and painted images — line drawings of jellyfish and skylines, photos of faces and body parts, jagged and curvilinear shapes — dances across the glass in a kinetic composition that takes a page from Matisse’s cutouts and Romare Bearden’s syncopated collages. My favorite of the group. 364 Nelson Street N.W. 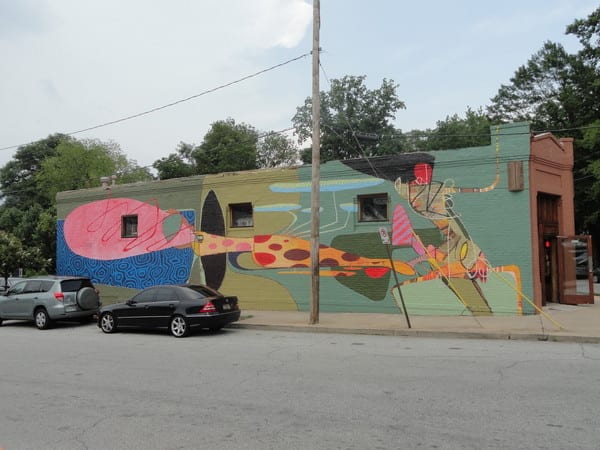 Tommy Taylor. Sponsored by Whitespace. Taylor’s mural commands the side of a one-story building in the commercial node near Inman Park. A cheerful, lively abstract painting, it’s visible from two intersections and permits close encounters from the sidewalk. The composition of organic shapes, inflected with polka dots and other patterns, has a 1950s vibe. I was particularly taken with its palette. Periwinkle and aubergine are among the colors that pop off the loden green background. 910 Austin Avenue N.E. 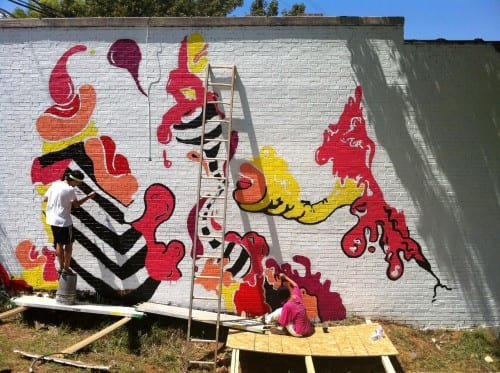 Lucha Rodriguez. Sponsored by Beep Beep Gallery. Although the cartoony biomorphic shapes of Rodriguez’s bubble-gum surrealism make for a piquant moment, this mural looks unfinished because it occupies such a small part of its wall. The Juniper Street location is problematic because it faces south on a southward-moving one-way street, and drivers pass it before they realize it’s there. The artist, who won the 2011 Emerging Artist Award from the Forward Arts Foundation, will open her solo show at Swan Coach House Gallery on August 11, so perhaps this project was too much to take on. Not her best effort. 573 Juniper Street N.E.