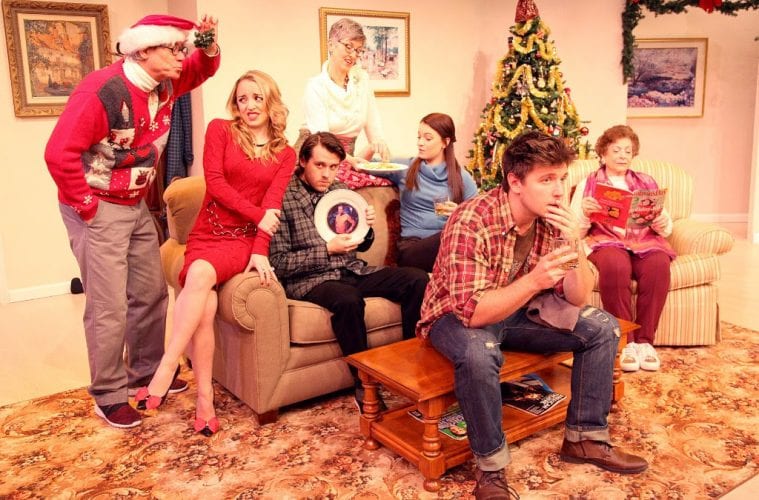 Writers are always encouraged to write about what they know best, and in the case of Phil Olson, he’s done so with his A Nice Family Christmas. It’s a sequel to the playwright’s 2000, Thanksgiving-set A Nice Family Gathering, based on his own relatives and some of their interactions over the holidays. Running through December 16 at Stage Door Players, A Nice Family Christmas is a comedy full of dysfunctional family members, secrets, reconciliations and jokes that should have been put to bed a decade or so ago. Director Ryan Oliveti has pulled together an agreeable cast, many of them Stage Door vets, but they can’t do much with the dated material.

It’s Christmas, and the members of a family are gathering together. Mom (Dina Shadwell), the peacekeeper of the clan, is now a widow. Her husband Carl died three years ago, and she is now living in a condo in a Minneapolis suburb. Visiting from Florida is Grandma (Susan Shalhoub Larkin), a salty, tell-it-like-it-is type who is tough as nails from her own upbringing.

Slowly the other guests arrive. Carl (Erik Poger Abrahamsen), the middle brother, is a journalist who is working on a story for the Star Tribune about his family. Stacy (Madison Welch), the youngest, is a lesbian who decides to come out to her family while she waits for her girlfriend to do the same. The family favorite is Michael (Jeff K. Lester). He’s a doctor who has separated from his wife over commitment issues. Said wife Jill (Alexandra Ficken) shows up later in the evening and due to a hormonal imbalance cries a lot. From time to time she loudly sings Christmas carols to try and cheer everyone up. Finally, there’s Uncle Bob (Larry Davis), who has a crush on Mom and is harboring some demons of his own. Olson effectively captures the contrast between the romantic notion of a family holiday and the reality of what it’s often like, but for all of the family’s issues, the script has scant character development.

Unfortunately, this is one of those comedies with a one-liner every few seconds that is supposed to pass for humor. Shalhoub Larkin is reduced to sitting in a chair spitting out one wisecrack after the other. The problem is, it’s not funny the first time she does it, and it’s certainly not humorous the 34th time. It’s a waste of a true stage presence. Her retorts are not funny and are borderline insulting. Grandma grew up in a day where men were men, she admits, and she doesn’t understand this generation. She mockingly offers one of her grandsons a tampon at one point and later calls another a pansy and tells him to play with his Barbie doll.

Many of the one-liners feel stale and clichéd — a character who can’t say the “l” word, a lesbian sister, tired jokes about Florida. In the second act, the play changes course and gets more serious and schmaltzy. It also concludes with a staggering amount of happy endings, which is not true to life.

It’s commendable that Stage Door would try to do a holiday show that isn’t some version of A Christmas Carol, It’s A Wonderful Life or some other over-produced holiday offering. I’ve enjoyed the previous two shows I’ve seen at Stage Door Players — Annie Get Your Gun and Picnic — but A Nice Family Christmas is largely forgettable.