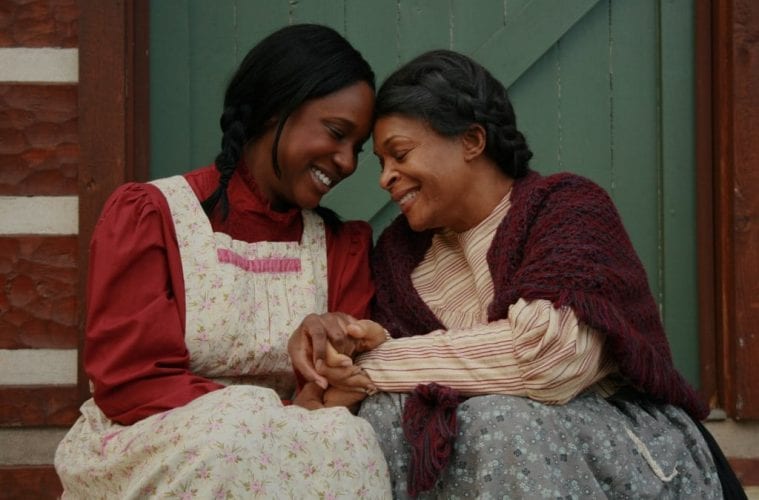 Since its premiere at the Alliance Theatre in 1992, Pearl Cleage‘s play “Flyin’ West” has become something of a contemporary classic. Over the past two decades, not a year has gone by without a theater somewhere mounting a production of it. And in the new revival at Marietta’s Theatre in the Square, on stage through April 8, it’s easy to understand the play’s popularity and success. It’s a funny, lively, touching show that humanizes a seldom-noted corner of American history.

“Flyin’ West” looks at the struggles of female black homesteaders in Kansas in the late 1890s. Slavery was still a living memory, and the play gives us a glimpse at the tribulations these women faced as they sought to escape the violent racism and prevalent sexism of the day even as they dealt with the scars of slavery.

The production features a strong cast of six, but its emotional center lies with its two lead characters: the independent and driven young Sophie (Marguerite Hannah) and the powerful matriarch Miss Leah (Donna Biscoe). Sophie understands the value of land ownership, and Hannah’s portrayal of her fierce strength and independence is fascinating to watch, especially as Sophie’s isolated kingdom comes under threat.

The land she lives on may not be much in the world’s eyes, but it’s clear that she knows its true value: it’s beyond priceless as long as it remains a spot where she can be left alone. Her simple but profound connection to the land can be seen in almost every movement and gesture that Hannah makes on stage.

Biscoe’s portrayal of Miss Leah is likewise lucid and astute. The depiction of her resistance to having her stories written down is especially touching. “Some stories you have to say out loud to keep life in them,” she says dismissively as Sophie’s sister urges her to tell them so she can transcribe them.

It’s an attitude that becomes especially resonant in the context of the stories that we do hear Miss Leah tell unprompted. They are stories that heal, instruct and clarify. Biscoe turns them into emotionally eloquent tales that intertwine with the stuff of everyday living. Her Leah is one of those powerful stage characters you know you’ll remember for ages after you’ve seen the show.

The entire cast does an especially nice job with the play’s lively humor. What could easily become a somber story remains vivid and personal in Cleage’s telling and in the cast’s energetic, fresh and funny reading. From the opening moments, though we’re in an unfamiliar place and time, it all feels somehow easily recognizable and universal, and the constant note of genuine humor is a crucial portal for the audience.

The complicated choreographed movement that Sophie leads the other characters in at the end of Act I detracts from the powerful simplicity of the spoken words in their shared ritual, but it pays off at the end when Sophie repeats the same movements alone in silence.

Some of the characters’ musings about the troubled relationships between black men and women feel too self-conscious, tidy and vocalized. The play’s strengths are more often in what is unstated, and the dialogue around the issue can often feel like a neon sign pointing to what has already been effectively dramatized. And “Flyin’ West” features a villain so dastardly that it can seem like something that’s actually of the period it depicts: it has touches of late-Victorian melodrama. But the complexity, humor and persuasiveness of its central figures overcome these minor problems. You’d have to be dead not to be compelled by “Flyin’ West.”

It’s unfortunate that this often-produced play has never been made into a movie. Atlanta’s Ballethnic Dance Company even turned it into a ballet in 2011. Many of the frustrations critics have felt about recent films that deal with the nation’s painful racial past are absent from the script of “Flyin’ West.”

The characters in “Flyin’ West” are independent, dynamic, individuated and complicated: they efficaciously face an unfair system head on. A film version is long overdue. On the drive home, I was even mentally casting the film with a dream team of Hollywood actresses. Let’s hope it happens someday soon.

In the meantime, take the drive to Marietta to see this production and to understand again why this play has been such a fixture in independent American theater for two decades.