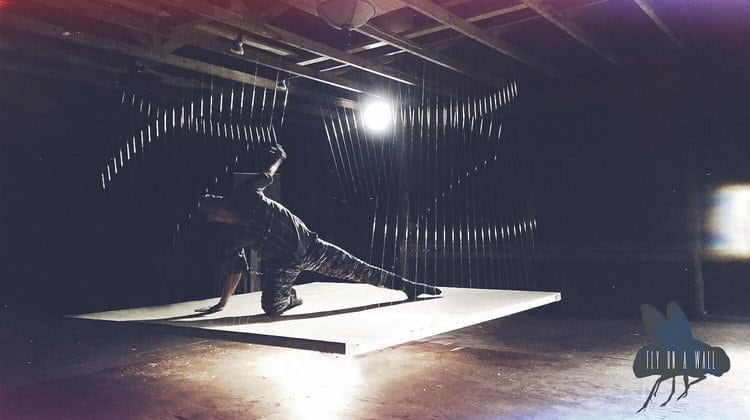 Review: Fly on a Wall’s “Prism II” experiments with diffraction, suspension and dance

The dance collective Fly on a Wall just returned with Prism II, an evening of exploration that invited the audience into the group’s research and development for a new project. This new work involving the concept and shape of prisms, coheres around a particular structure, a floating platform for dance that is also an instrument. Suspended by harp strings and monofilament, the prism-shaped floating platform can be plucked, strummed and sounded by the dancer.

For the event on Sunday in a as-of-now vacant building in the Reynoldstown neighborhood, the group split the process-performance into two discrete sections. The first section focused on the musical potential of the platform and the second on the movement potential. Dancer Erin Rausch interacted with the platform, manipulating the harp strings by bouncing off, twisting appendages into, and reclining against them, while Jesse Tyler, a core Fly on a Wall member who contributes the group’s audio material and environments, “played” the platform using PVC pipes equipped with a microphone accompanied by synthesizer.

These sounds were recorded and then played back during the second half of the evening displaying the movement vocabulary generated by Fly on a Wall — cycles of suspension, tension and release — and how it merges with and diverges from the instrument-structure. Though focusing on tension and release has been a choreographic concern since Martha Graham, the point of weight shifts dramatically with the introduction of a new floor-above-a-floor. However, this is not the only intriguing aspect of this new work.

What I find to be particularly exciting about Fly on a Wall’s work is how the collective works and the way in which it builds environments for performance. Audiences should by now be familiar with dance that considers site as collaborator, protagonist or driving force. Here in Atlanta, we have strong dance companies that negotiate particular sites, spaces and places in the development of the work. (Pardon me while I bracket a conversation concerning the differentiations among these terms. I will save that for a later time). I’m thinking specifically of T. Lang Dance’s interventions and imaginings of places, Blake Beckham and Lucky Penny’s construction of spaces, and gloATL’s interventions into sites. Though Fly on a Wall has only been presenting work since 2014, the group’s body of work displays a richness in concept, choreography and execution that achieves a seat at the table with these other seasoned companies.

It is refreshing and evocative to experience the artists’ stages of research, development and experimentation. Usually, as is the case for most artists and the work they produce, so much happens behind the scenes, and only when the work is “completed” is the audience given access to the discrete, special object. Process, and here I will add social engagement, continue to be important modes of working for artists, and I am thrilled to see this way of working in Atlanta dance. Often, companies will invite the public into the studio for workshops, but here, Fly on a Wall gives the audience an opportunity to discuss the work in its early stages and possibly influence it. In opening the process to the audience, Fly on a Wall demonstrates an ethic of care, concern and respect.

While speaking with Sean Hilton of Fly on a Wall, he described the group’s interest in prisms and how they are objects of refraction, a shape that also surfaces in another recent work, Hz. He further referenced the group’s Prism Study no. 1, which was installed and performed on the Atlanta BeltLine in September 2014. For that iteration, Fly on a Wall built and installed structures made of Plexiglas and wood to “isolate[e] encounters, emotions, and experiences expressed through multiple genres of art and public interaction.”

Though still operating within the realm of the prism, this new iteration, Prism II, actualizes a different kind of relationality that is ultimately more unrestricted and fluid. With Prism II, the solidity of the Plexiglas of Prism Study no. 1 fractures into the delicate yet surprisingly strong wisps of harp strings, allowing the body of the dancer to navigate in and out of the contained, yet open, space of the floating platform. Without getting too much into physics, I would suggest that this work operates more as diffraction, differing from refraction which suggests a more static point of reference and stable relationship between objects. Diffraction provokes a process of reading and understanding that recognizes the entangled relationships of phenomena, and does not rely on stability.

Illuminating these relationships is what I think Prism II seeks to do. In experimenting with a floor-above-a-floor that does not stay still and sound outs with the dancer’s body, the work enacts the relationship we all have with our environment; it is sensitive to the ways in which we impact it, knowingly or not. Ultimately, we all feel the aftermath of the oscillating swing of the pendulum.

Over the course of the next few weeks, Fly on a Wall is planning some more research events, so be on the lookout.