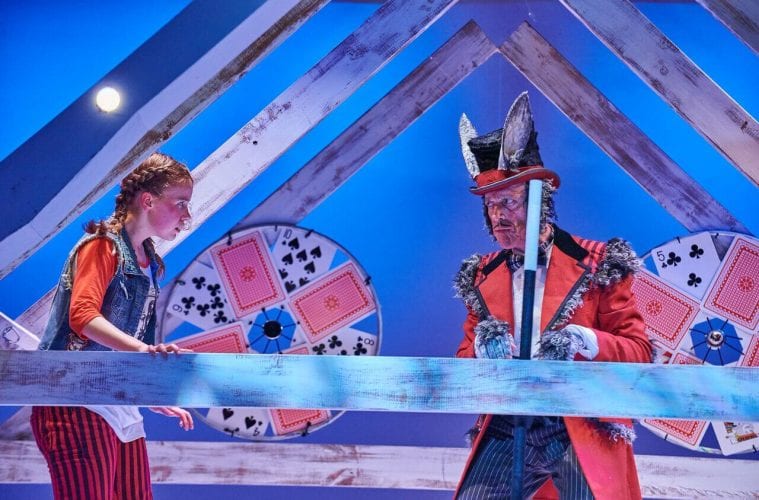 In his curtain speech before his new musical The Dancing Handkerchief, The Flying Carpet Theatre Company artistic director Adam Koplan called the production — a collaboration with Theatrical Outfit — an “out of the box” project. That’s a fair assessment of a show that’s unlike anything onstage this year — maddening at times and wonderful at others.

Running through June 18 at the Balzer Theatre at Theatrical Outfit, The Dancing Handkerchief unites Koplan (who penned the script based on a story he and Geoff Sobelle came up with) and noted lyricist Robert Lopez. It’s a play that resembles a silent movie, with original music but scant dialogue in its just-over-an-hour time frame.

When we meet lead character Bastienne (Deborah Bowman), she is scorching her way through a rock number at a concert. Offstage, she finds out her father — Mysterioso the Magician, played by Tom Key — has passed away and heads back home, where she reminisces about life growing up. She and her father didn’t agree on her career — she wanted to write music and he wanted her to pursue magic — and when Bastienne ruins an illusion, their relationship is soiled. Wanting to run away, she is instead invited into her father’s magic bag by a prop handkerchief.

It’s not a stretch to compare Bastienne’s journey afterward to Alice in Wonderland. Down the rabbit hole, she discovers a world full of animated objects — such as a wand and the titular character — as well as a rabbit that everyone is afraid of.

Koplan and Lopez’s production of 1001 Nights at The Center for Puppetry Arts was a terrific musical and one of the highlights of 2014, blending playful, smart songs and puppetry.

This is a project that has been brewing for more than 20 years, but it’s just not as seamless. It’s a goofy, almost avant-garde ride, combining puppetry with magic acts, music and moments of silence. It is clearly designed for children and adults (the matinee I attended featured a mixture of both), but the staging can be confusing.

Bastienne as a child is depicted as a puppet manned by the young adult version of the character, delightfully played by Devon Hales. It’s mandatory that the puppet play a guitar and as such needs to be manned by two people. The addition of Spencer Stephens, however, standing behind Hales to help with the puppet maneuvering is jarring. Other times, the narrative simply isn’t easy to follow.

The dynamic between father and daughter here is fascinating and the most absorbing element of the show, but it can get overshadowed a bit. Less fantastical moments and characters and more time between the leads might have helped.

What works most majestically here is the music. Lopez, known for Avenue Q, Frozen and The Book of Mormon, is the youngest ever recipient of the EGOT (the Emmy, Grammy, Oscar and Tony Awards). He has written two new songs (“Disappear” and “Is Music a Kind of Magic”) for the premiere, and his lyrics convey what his characters are thinking and not saying. (These are memory songs, not soundtrack songs, as Koplan — who directs the production — says). In the opening number, Lopez’s lyrics make Bastienne’s thoughts clear — “My Papa was a magic man/Taught me every trick he knew/He could command mighty spirits/But there was nothing he could get me to do/I thought I was awesome/He thought I was loud/In the end I got his blessing/But did I make him proud?”

It’s not unfair to say that the music is more effective and expressive than the storytelling.

Bowman energetically sings that opening number and brings a melancholy to her role, as she reflects on the direction the relationship with her father took. Bowman and Key establish a nice father-daughter relationship amidst the almost dialogue-free setup. That they can do that is admirable.

The Dancing Handkerchief concludes the season for Theatrical Outfit, one that has seen some bold stagings. In the end, I was fairly intrigued by The Dancing Handkerchief, its magical world and the boldness of its vision, but I do wish it were a tighter, more balanced show with a structure as straightforward as its music.