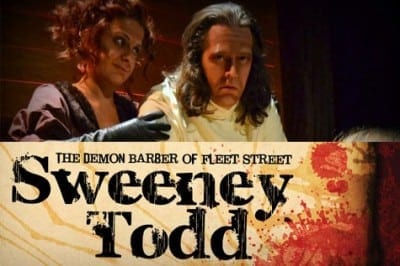 “A Little Priest,” the number just before the end of the first act of “Sweeney Todd,” dramatizes a moment that’s almost certainly unique among musicals: the protagonists have decided they’ll turn their murder victims into meat pies to sell. In Stephen Sondheim’s universe, such a moment merits a touchingly playful, almost giddy song: a misanthrope and a pragmatist have recognized their parallel aims and celebrate with macabre jokes and a bit of cheeky wordplay.

The cast in Fabrefaction Theatre‘s new production of “Sweeney Todd: The Demon Barber of Fleet Street,” on stage through November 13, does an especially effective job of bringing such dark, funny and idiosyncratic moments to life. For tickets, click here.

The story is based on a Victorian “penny dreadful,” and likely an earlier urban legend, about a barber who kills customers in his chair and disposes of the bodies by having the proprietress of a nearby bake shop turn them into meat pies. There have been several stage and film versions, and even a 1959 ballet, but Sondheim’s musical is the most familiar. His 1979 Broadway show was a hit, and it was made into a movie by Tim Burton in 2007. Fans who have seen only film versions will be surprised by the power of the story on stage: the immediacy and creepiness that one longs for in the film are everywhere in the production at Fabrefaction.

Clint Thornton (at left) broods and sneers in all the right places, but more importantly he brings out the most crucially humanizing aspect of Todd: the character has a murderous hatred for humanity that’s motivated by a long-festering individual hurt. Perhaps behind every throat-slitting, cannibalistic pessimist there is an overly naive, disappointed optimist: Thornton makes us believe it.

After being assigned a Cockney accent and all the funniest lines, it would be easy for an actress to use the role of the pie-making Mrs. Lovett for some broad mugging and easy humor. But Diane R. Mitchell is not just remarkably and smartly funny in the role, she also conveys the overarching, and more deeply humorous, sense of Lovett’s skewed practicality that coexists with her concern for Todd and the orphan boy Tobias Ragg (Daniel Collier). In an instant, she can switch from sweet, matronly solicitude to a workmanlike efficiency as she sets about grinding up a customer to make a bit of money to tuck away for that home by the sea.

Fabrefaction’s stage has an unusual shape: it’s long and narrow like a Cinemascope screen, and the audience is very close to it. Scenic and lighting designer Jeff Martin handles the technical challenge well by creating a long, narrow, appropriately Gothic morgue setting with lots of small, dark territories for the drama to take place in. Characters often enter by being pulled from a morgue drawer: they remove their shroud and rise from the slab (it’s that sort of evening). Travis Boatright’s costumes have a macabre Victorian fustiness, like clothes from an Edward Gorey illustration, and they’re caked in equal parts London grime and dried blood.

In another nice innovation, Lyndsay Ricketson, as Todd’s innocent daughter Johanna, floats through the story as an observer of the tale narrated by the ghoulish chorus. The addition never feels intrusive or distracting, but interestingly brings to the fore the play’s cautionary aspects — it becomes a literal caution about the dangers of all-consuming revenge. In a small, stripped-down stage production, the small cast is called on to do quite a lot. It’s a challenging score, and many of the actors double up roles and are on stage for most of the performance.

In the end, the roles are nicely sung all around, but there’s too much vibrato (or vocal mannerisms) in the male cast: the more natural, unmodulated sound of their voices, when it comes through, is so much more powerful. A spare arrangement of a few musicians off stage leaves the focus entirely on the actors.

The cast keeps the evening lively and engaging, but audiences should know beforehand that the production does not follow the recent Atlanta trend of plays that clock in at a blink-and-you-miss-it hour and 15 minutes. Eat before this three-hour show. Afterwards, it will be too late — in several senses — to go to a restaurant.