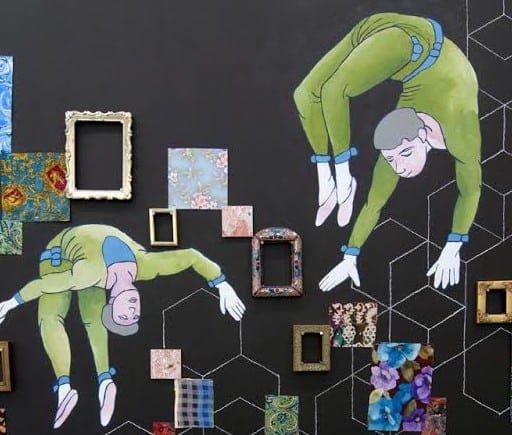 Exquisite Exhibit: Parlour Games from the Studio Artist Program, at the Atlanta Contemporary Art Center through October 11, lives up to its name in more ways than one.

On the one hand, most of it is exquisite; on the other, the 21 artists selected by curator Joey Orr have produced a genuine update of the classic surrealist game of exquisite corpse. But their wall-filling murals, sculptures and videos are anything but a parlor game.

Orr cleverly matched up artists who have had studios at the Contemporary over the past decade in a fashion that guaranteed familiarity but promoted inventiveness. Very few stuck to the rigorous rules of the game, but the ways in which they collaborated on a single artwork ranges from mostly mapped out to utterly governed by the unconscious. Dayna Thacker, Lillian Blades and Faith McClure came closest to the original game, in that each one took up a segment of the wall where the other had left off. Thacker’s sacred geometry segued into Blades’ geometrizing of picture frames attached in a loose pattern over her trademark vividly colored assemblage. McClure’s transmutations of classical figures transgressed the space of the other two in a modest way, but by and large this was a case in which the three styles mixed but did not mingle. The other extreme, at least in appearance, were the ceramic and fabric creations of Jiha Moon, Laura Bell and Ann Rowles. Looking like faintly whimsical homages to H. P. Lovecraft, these small, endearing, tentacled critters combined visual poetry with prods to subconscious desires and dreads. They filled the wall in a quite different way from the 2-D art, each object being only itself and sedately fitted onto a shelf or a pedestal. Yet they fused the styles and skills of the three artists in a more integral way than many of the monumental murals sprawling from one edge of the wall to the other.

This is not to say that the other approaches were failures. The adjacent wall featured figures and landscape by Matt Haffner, Sarah Emerson and Michi Meko in which each segment was readily identifiable, but Haffner’s golden bees overlaid the scene in a way suggesting unconscious inspiration overriding original intent.

The walls hold up as artworks regardless of whether the viewer is familiar with the artists or not. A label identifying the source of the little objects on the shelves is the only explanatory text apart from the names of the collaborating artists, but these are examples of visual pleasure in which concealed concepts play little part.

For all of that, it might be useful to know that Joseph Peragine has returned, however briefly, to immense paintings of often sentimentalized animals, and his enormous picture of a white rabbit dominates the wall he has produced with Gregor Turk and Craig Drennen. Turk’s black-rubber-wrapped hobbyhorse likewise denotes some surprising collision of innocence and experience, and Drennen’s enormous “HELLO” completes a strange swirl of imagery that works as beautifully visually as it baffles in terms of possible meanings.

Likewise, Marcia Vaitsman, Michael David Murphy and Jonathan Bouknight offer a tripartite video in which signature styles dealing with cultural and psychological forces appear in a stack of three simultaneous streaming images. It resembles what each artist does individually, but it does so for a simultaneous viewing that resembles the original exquisite corpse game but is clearly the result of collaborative forethought.