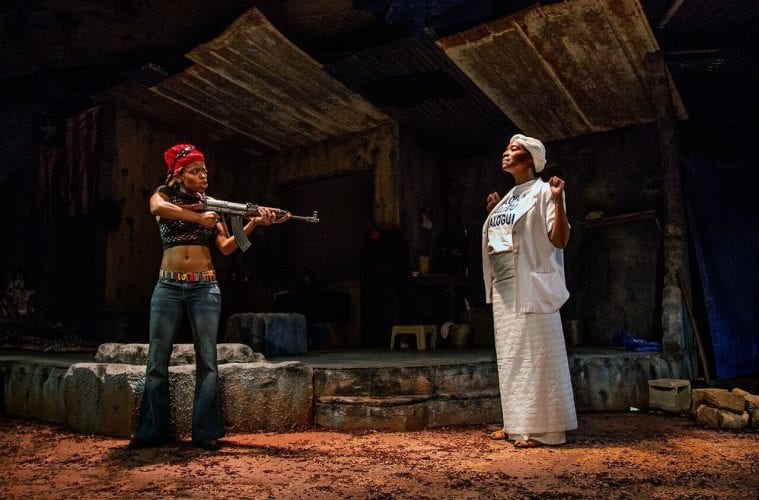 Review: “Eclipsed” demonstrates the power of theater to articulate the world in which we live

Characters in a drama, almost by definition, are thrust into difficult circumstances, and it’s hard to imagine situations more dire than the ones experienced by the characters in the show Eclipsed, on stage at Synchronicity Theatre through June 25. The play by Danai Gurira has had several productions across the country, including one on Broadway starring Oscar-winning actress Lupita Nyong’o. Synchronicity is presenting the Atlanta premiere.

Rape, violence, the deprivations of poverty and loss of family, freedom and even personal identity are the stuff of daily life for the women in the play. Such a description may bring to mind the world of The Handmaid’s Tale, but sadly, this is no imagined future dystopia, but rather the recent past in war-torn Liberia.

The play is set in and around a small, shabby shanty in a rebel compound where a small group of women are held captive by an unseen warlord they refer to as “C.O.” As the play opens, the matriarch of this makeshift household (Shayla Love), called simply Wife Number One (family names are all but discarded in this environment), is attempting — along with Wife Number Three (Charity Purvis Jordan) — to hide the presence of a new refugee, a pretty young girl (Asha Duniani) who has recently fled fighting in her own village.

But the unnamed girl is soon found out by the violent and possessive C.O., and the worst fears of the group are realized when she’s raped, seemingly destined to become the latest wife. The plot thickens when Wife Number Two (Isake Akanke) returns to the compound after a long absence: she’s now a soldier who tries to recruit the Girl to join her in the war instead of simply becoming another lifelong victim of sexual abuse.

The play has a strong cast all the way around, actresses who deftly humanize the women’s lives with sympathy and humor under the strong direction of Tinashe Kajese-Bolden. I especially admired newcomer Isake Akanke as the attractively independent but ultimately horrifyingly brutal female soldier, Wife Number Two, who insists on being referred to by her new combat nickname “Disgruntled.” Overall, she’s a character who’s less immediately sympathetic than the others, but she’s more interesting because our feelings about her become more complicated. She’s even stylish and cool, but we soon see that her duties as a soldier in this war are far from heroic or admirable, and her desire to recruit the Girl is far from selfless.

Plays that center on women or that depict contemporary Africa are far too rare, so the show is noteworthy, if not singular. Although the depicted world is harsh, there’s never a sense of wallowing in misery; there are, in fact, wonderful, surprising and often lovely touches of humor throughout.

More problematically, however, there is always a weird self-awareness in the writing that the depicted subjects and the intended audience occupy two completely distinct realms. There are plenty of strong arguments to be made in favor of dramatizing the lives of the destitute and victimized people of the world for an audience composed primarily of the relatively wealthy, comfortable and privileged. But there are also plenty of strong arguments that point out how problematic such an arrangement is.

No matter which side of that ongoing debate you might end up on — even if you decidedly feel that the theater is a crucial tool for raising social awareness and instigating change — Eclipsed may still leave a trace of a strange taste in the mouth. And there are elements here that serve to extend, rather than diminish, that sense of strangeness, most often perceived in a frequently recurring plot device wherein the characters read aloud from a biography of Bill Clinton to pass the time.

The play centers on the lives of women, and the men, though often spoken about and frequently seen or heard as just off-stage, never enter. The women therefore emerge as complicated, sympathetic, funny, strong, sometimes kind, sometimes cruel and so on, but the unseen men are unvaryingly one-dimensional: rapists and warlords.

It’s a set-up somewhat reminiscent of the film version of The Color Purple, in which sensitive, intelligent, complicated and sympathetic black women are shown to suffer at the hands of dundering, drunken, violent black men for mainstream, often primarily white, audiences, a problematic aspect of that film that’s been well-noted by various writers and critics. It’s a criticism that could just as easily be leveled at Eclipsed.

Still, the show is memorable for its strong depiction of humanity retained in inhuman circumstances through the strength, humor and resilience of its characters. In spite of its problems, Eclipsed is a reminder of theater’s power to make unimaginable suffering halfway across the world feel suddenly, vividly present.