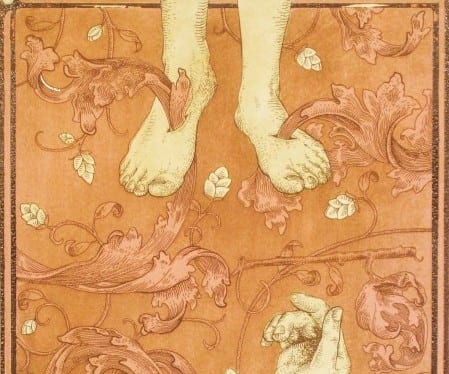 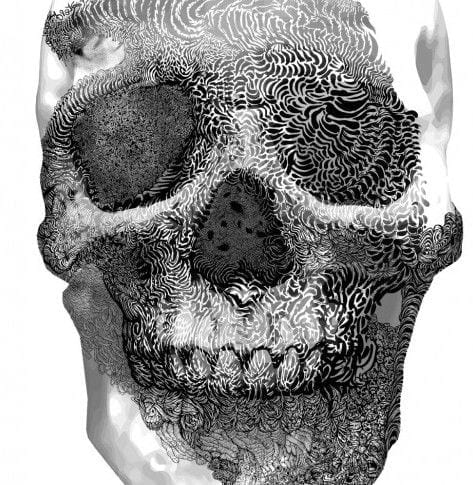 A detail from Paul Rodecker's "Skol I."

Seeing the shows at Kibbee Gallery used to be a two-shot affair: at the opening and the closing. Thankfully, the gallery is now open Thursdays through Saturdays. I say “thankfully” because Kibbee is one of the best places to see a mix of Atlanta artists at various stages in their careers.

Guest curator Joe Elias Tsambiras has assembled such a group in “Echoes: Adventures in Printmaking,” which runs through April 28. The Kennesaw State University professor brings together seasoned artists such as Matthew Sugarman and talented students such as Ashlyn Pope in an exhibition that showcases wide-ranging approaches to the medium.

These artists print on anything from paper towels to stuffed animals, and a number of them liberate the print from the frame. The collective Plastic Aztecs takes to the wall in “A Whiff of Uncertainty,” in which little cutout screen prints resembling spider webs and other bits of nature float as if in thin air, some actually jutting out from the wall. 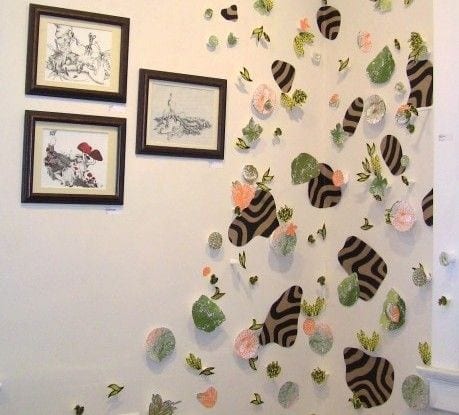 The Plastic Aztecs' "A Whiff of Uncertainty" escapes from the frame.

The elements battle it out in Stephanie Smith’s ”Obscured Vision.” The University of West Georgia professor produced giant woodcuts affixed to board to create an installation in which a hovering cloud dripping huge raindrops threatens to douse the campfire below.

Silk-screened pigs (the aforementioned animals) do fly, along with kites, all of which seem to be soaring out of a cardboard container like a Hydra-headed jack-in-the-box in Chris Neuenschwander’s whimsical sculpture.

Paul Rodecker uses a computer program called Manga Studio, designed for drawing comics, in his “Skol” series. The images are all hand-drawn, according to gallery director Ben Goldman, and the artist has pushed the limits of the software. The prints depict a large skull, which Rodecker has filled to various degrees with dense passages of imagery — body parts, flora — that evoke the horror vacui (fear of emptiness) of medieval art, not to mention just plain horror. Rodecker represents a skull-and-bones Goth sensibility, one of the leitmotifs that hold this show together.

The image of the hand and a sense of implied narrative are also common threads. The pieces in Mariana Depetris‘ “Tale of the Handless Maiden” series exemplify both. These delicate mixed-media works, which evoke the intimacy of the artist’s private notebook, are inspired by female protagonists of dark folk tales and stories. 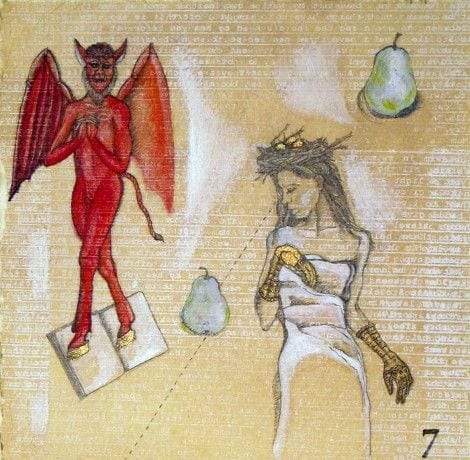 Tsambiras takes a page (forgive me) from medieval manuscripts in “Flow of Memories.” In this beautifully executed etching and aquatint, tendrils of vines pierce disembodied hands and feet. The image brings to mind the Crucifixion, but also sundry myths in which human characters physically meld with trees and other natural elements. KSU student Pope explores the same theme, though with a more sexual resonance.

“Printmaking comes close to a representation of the echo: multiple prints emanate from a matrix,” Tsambiras writes. Given all the references to archetypes, myths and medieval art on view here, it would seem that “Echoes” is even more apt a title than he intended.