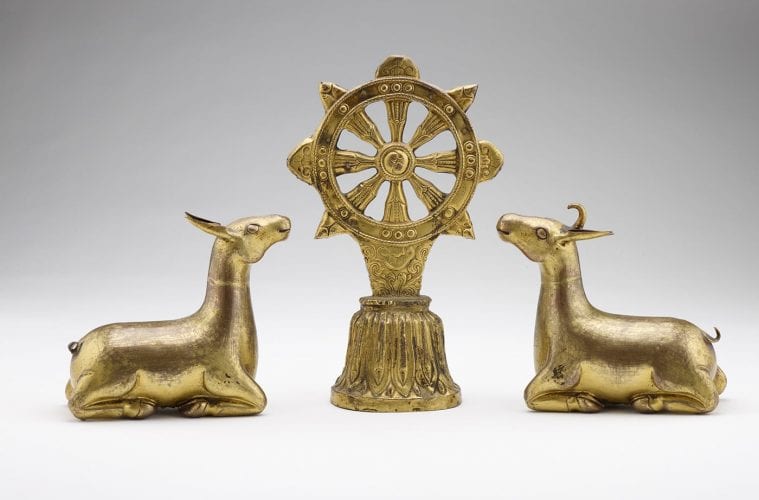 Review: “Doorway to an Enlightened World” is impactful, even without context

Doorway to an Enlightened World: The Tibetan Shrine from the Alice S. Kandell Collection at the Michael C. Carlos Museum through November 27, consists of a single spectacular Tibetan shrine –a shrine so singular in its complex spectacle that one visitor to its iteration in Washington wrote that it truly changed her life, while another simply wrote in the comment book, “Omg, like woah!”  (Both of these quotations come from the oral testimony of Alice S. Kandell.)

The spectacle is, in fact, mesmerizing. Golden Buddhas of all styles and sizes abound atop painted cabinets. Trumpets and less identifiable ritual implements flank the cabinets at floor level. Brocade wall hangings abut scroll paintings of divinities. Seven bowls of rice demonstrate that this is a potentially live site of worship, arranged as it would be, or would have been, in a wealthy Tibetan household.

Many of the objects in the shrine were, in fact, brought from Tibet by well-to-do refugees who sold them out of financial need or because the next generation had no interest in carrying on the tradition of household shrines. Museum conservator and Orthodox Christian monk Philip Rudko, who grew up in a Russian émigré colony in New Jersey that included Kalmyk Mongol practitioners of Tibetan Buddhism, purchased his collection of these objects from their owners to keep them from being dispersed in the global art market. When Rudko met Kandell, whose own road to collecting Tibetan art is similarly extraordinary (described by Jon Ciliberto in his companion ArtsATL preview here), they joined forces to preserve Tibetan religious art in its original context. 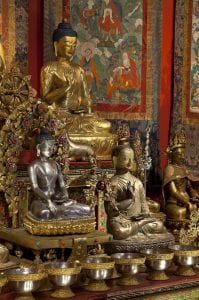 A Shrine for Tibet (section)
Photo courtesy of The Freer Gallery of Art and Arthur M. Sackler Gallery, Smithsonian Institution. From The Alice S. Kandell Collection.

When Kandell donated the shrine to the Smithsonian Institution’s Arthur M. Sackler Gallery, she stipulated that the shrine must be exhibited without the customary separation into scholarly categories with wall text. Instead, a chart identifying the individual pieces is keyed to the explanatory entries about them in the beautifully designed catalogue A Shrine for Tibet: The Alice S. Kandell Collection of Tibetan Sacred Art, reference copies of which have been placed in the gallery for consultation.

The shrine itself is adequately contextualized by a single extensive wall text, which visitors are unlikely to read at first, given the compelling visual impact of the shrine before them.

Once they encounter the text on the wall opposite the shrine, questions are answered that might never otherwise have occurred, even to the visitor with a general familiarity with the Buddhism of Tibet. The text describes succinctly the range of shrines that Tibetans enter “to ‘meet,’ rather than to ‘see’ Buddhas,” from portable objects for nomadic texts to entire rooms of mansions, as is the case with this compilation of objects mostly from the shrines of three families.

There is an extended explanation of the occasions on which new objects would have been acquired “to obtain merit and for the welfare of all sentient beings” — everything from births and deaths to pilgrimages. This description condenses greatly the specifics of practice, in which the merchants and aristocrats who would have accumulated such objects in a household shrine were expected to use it not as a site for perfunctory worship but as a means of meditation on their own impermanence and the need to practice compassion.

Although Atlanta has seen an ample number of museum exhibitions of Tibetan religious art from monasteries, arranged in meticulously annotated linear formats, this is the first exhibition devoted to re-creating the circumstances of private religious practice. Although this shrine is of a grandeur that would have been available only to the wealthiest and most perceptive connoisseur, the poorest household would contain its own private shrine, sometimes consisting of no more than a single image. And that shrine, to repeat, was and is intended to transform the owner’s consciousness, not to be worshipped unthinkingly.

The catalogue explains such matters alongside historical notes on the four centuries of Tibetan, Nepalese and Mongolian art represented by these 124 lovely objects. But the shrine does not yield its secrets readily, and some visitors may find themselves falling prey to impatience. This experience, of course, is also a road to self-knowledge for those prepared to notice their own impatience — such questions would, of course, not have presented a challenge to the original possessors of these objects, for whom the tenets of their religion were a matter of daily life. (On the other hand, the wealthiest practitioners employed lamas to arrange the shrines properly when they were transferred among different residences, so the particulars of object placement may not always have been uppermost in their minds, either.)

It would be better if there were a slightly more extended brochure describing the functions of the Tibetan shrine and the contexts in which various objects would be put to use. This would fill in some of the particulars of Tibetan Buddhist practice and Tibetan culture for visitors less inclined to work their way through the several informative essays in the catalogue.  Museum members at the opening reception had the advantage of the presence of Kandell and Rudko, both of whom answered questions in illuminating detail. Current visitors are limited to what they find before them. Although what they find is theoretically more than enough to answer whatever questions may come to mind, even with the wall text as an initial guide, visually overwhelmed viewers may not quite know what questions they ought to be asking.