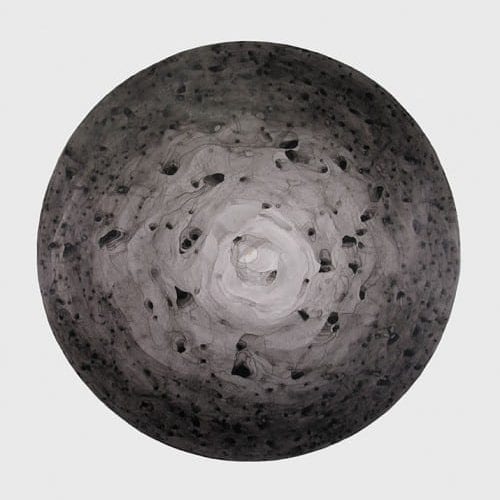 It’s almost impossible to discuss the metaphysical or the spiritual — the latter a term so overused that it’s practically ineffective — without sounding somewhat inarticulate, tongue-tied or, perish the thought, new-agey or naïve. Some aspects of human experience expand beyond our ability to clearly depict them with words. Even the great T.S. Eliot, musing on the nature of the spiritual in the modern era in “Four Quartets,” described every attempt of language as “a different kind of failure.”

Perhaps this is to our benefit. That numinous aura of the unknown might deflate like a punctured balloon were we able to clearly describe it as well as we could describe what we ate for breakfast this morning.

Don Cooper meditates on that which defies language. He is not interested in conveying topical subjects such as the political, the academic or the theoretical, but seeks to excavate that subterranean pulse that beats underneath all living things. The six 60-by-60-inch acrylic washes on paper in his solo exhibition “Path Within,” at Sandler Hudson Gallery through June 1, are an energetic, edgy departure from his past work in form and materials, yet they maintain the Rothko-esque vitality and luminosity that distinguishes his oeuvre.

The Atlanta artist has devoted nearly a decade to the bindu, an image in the Indian yogic tradition that represents the point at which all life begins and ends. Here, he cracks open the cosmic symbol to reveal its internal contents. Walking through the exhibition, one feels as though the artist is leading us deeper into the recesses of our cosmic origins, each composition unveiling yet another layer of chaos. Cooper’s “This Moment as It Is” (2008), in the collection of the Museum of Contemporary Art of Georgia.

Whereas Cooper’s concentric circle paintings of the last several years, three of which are in this exhibition, emanate a virtue in perfection of form, the new works seem to have a will of their own. Fluid and amorphous, the images he conjures up appear to emerge from an obscured evolutionary history.

This is partly due to a new synthetic material Cooper himself was surprised to adopt. Startling at first due to its bright white sheen, YUPO is a non-absorbent paper that allows the artist to create what he calls a “circular pond” of paint that evaporates and leaves residual sediment-like configurations.

The overall free-form process allows room for imperfection in a manner that makes this work both recognizable and relatable in addition to otherworldly. Rather than painting in the traditional sense, Cooper is left to negotiate with the natural movement of the paint as it wills itself across the surface of the paper in a process similar to Helen Frankenthaler’s “soak stain” paintings as well as local artist Seana Reilly’s liquid graphite ones.

Nebulous forms gradually emerge in this painterly primordial soup, evoking the biological, the geological, the celestial and the elemental. In “Inner Space: Carbon,” a gigantic black sun radiates viscous rays of light that merge with a migrating path of planets; dried puddles of paint form concentric markings similar to fingerprints or rings inscribed on a tree trunk. As is the case with much abstraction, multiple interpretations can exist simultaneously. “Point of Departure” (above) could be a thousand discrete worlds, depending on the magnification of your microscope (or telescope for that matter). From one angle it appears as a stirring of delicately rendered micro-organisms swimming up to the surface of a sunlit pond; from another, like looking into the vigilant eye of a reptile.

Similarly to the “action painters” of the 1950s and ’60s, Cooper’s works are not pictures but events — “arenas in which to act,” as critic Harold Rosenberg wrote in 1952. For Cooper, painting is not a depiction but an emanation of a daily ritualistic communion with something beyond himself. A mesmerizing balance between presence and absence, these works exhibit a command of materials by an artist who knowingly exists in infinitesimal proportion compared with the immeasurable worlds he creates.