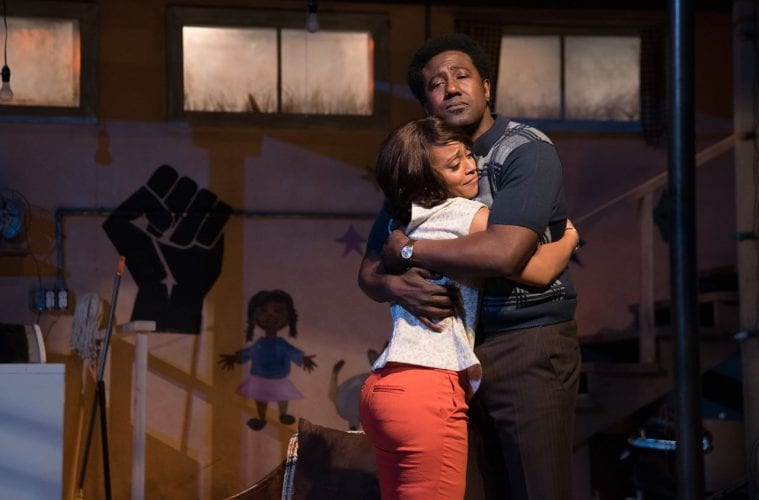 Review: “Detroit ’67” has right elements, but fails to evoke music it seeks to celebrate

Detroit in 1967 was famous for its Motown music (nearly every single the legendary label released that year became a nationwide hit) even as it became infamous for its summer riots, among the deadliest and most destructive in U.S. history.

Both aspects of Detroit’s complicated history are central to the new play Detroit ’67 by Dominique Morisseau. The play originated at New York’s Public Theater in 2013, in association with the Classical Theater of Harlem and the National Black Theater, and is now getting a production at True Colors Theatre in Atlanta through March 8. ArtsATL’s Kelundra Smith interviewed Morisseau about creating the world of the play in a preview last week.

The action of Detroit ’67 focuses on brother and sister Chelle (Tinashe Kajese-Bolden) and Lank (E. Roger Mitchell), who run what’s known in Detroit as a “blind pig,” an under-the-table after-hours nightclub, in their basement. The real, historical Detroit riots were instigated by a police raid on a blind pig: in the play, it’s not Chelle and Lank’s club that gets raided, but it does make the violence that eventually erupts outside their door hit closer to home.

Everything seems in place for a great show — a fantastically evocative and still politically hot historical backdrop, an interesting set of characters, a great set by Atlanta designers Isabel A. Curley-Clay and Moriah Curley-Clay. But somehow, surprisingly, the play remains dramatically mild, even dull.

Chelle and Lank are appealing siblings to focus on, but in the end they seem too clean cut, conservative and gentle to hold our interest for long. Running a blind pig in Detroit in 1967 would take some tough skin, I’d imagine, and I wanted to see more of that toughness in them.

They also seem strangely isolated. It’s difficult to capture a sense of an overarching community with the small cast of a contemporary show, but certainly what’s wanted here is a sense of a larger world and community just outside, more people in and out of the basement nightclub where the show is set.

Chelle and Lank actually don’t seem to have much of a personal stake in the riots, or — perhaps more crucially — they don’t seem to entirely share the sort of anger and resentment that must have led to the violence in the first place.

They’re removed from the instigating forces (it comes primarily as a surprise to them that the riots have started), and their connection to the violence turns out to be financial, rather than more directly emotional or communal. Lank is worried about a new bar he’s invested in and takes risks to protect it.

The Motown music threaded throughout the show is very nice, but it doesn’t really connect to the action in the Greek chorus in the way it should. There’s also not enough sense of this being the hometown art form suddenly on a national stage, of the characters feeling some special pride and, more importantly, proximity to the artists as living people or even of the music communicating something particular about the time and place that may have helped unite people in their anger.

Midway through the first act, a new character, Caroline (Courtney Patterson), brings some interesting complications, but she remains too mysterious and distant to become convincing or interesting. When one of the peripheral characters dies in the second act, it’s surprising and sad without being particularly shocking or genuinely moving.

It’s always easy to tell when you’re not being moved by a play — if you’re not feeling it, you’re not feeling it — but it’s often much more difficult to tell why. The case of Detroit ’67 is especially difficult because so much of it seems to be in the right place. Still, in the end, the play never quite evokes the emotion, singularity and intensity of the music it honors or the tumultuous time it depicts.