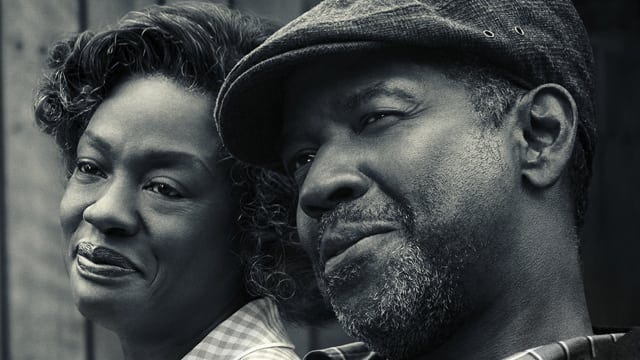 As the teenaged Cory (Jovan Adepo) tries to walk around his father on the porch steps, he says, “You’re in my way — I gotta get by.” It’s an on-the-nose description of generations of father-son relationships at the heart of Fences, a long-awaited screen adaptation of one of the late August Wilson’s great plays.

Directed by Denzel Washington, the film in many ways is a transplant of the 2010 Broadway production, directed by Atlanta’s Kenny Leon, which won Washington and co-star Viola Davis top acting Tony Awards. Five of the movie’s six main cast members starred in that production.

Taking the directing reins from Leon, Washington again plays Troy Maxson, a Pittsburgh sanitation worker in the mid-1950s, married to Rose (Davis) for 18 years, and father to both high schooler Cory and 32-year-old musician Lyons (Russell Hornsby), born from a previous relationship.

He’s also brother to Gabriel (Mykelti Williamson), a war veteran whose service left him with brain damage and the sunny disposition of a child. His best pal Bono (Stephen Henderson) collects the city’s garbage with him and shoots the shit over a pint of gin in Troy’s backyard every Friday after they pick up their pay.

As we listen to them joke and boast and tell tall tales starring God and the Devil, we discover where the movie, like the play, lives: in language. It’s a rolling, unending cascade of words that summon up the storytelling Southern roots of people like Troy, part of the great migration to the industrial North in the early 20th century.

The plot in Fences is minimal. Not a lot happens, and a lot happens. Working from Wilson’s own screen adaptation of the play, Washington doesn’t open things up much in visual ways. There’s no need to. Everything mainly takes place inside Troy and Rose’s house, or in the yard, where Troy is trying to get Cory to help him build the fence his wife wants. Cory, though, is pinning his spare time and hopes on football practice. A recruiter is coming to watch him play.

Though Troy himself once held promise as a baseball player — or because of that — he blocks Cory’s ambitions, insisting that the white world of the 1950s won’t let a Black athlete get ahead. Maybe, maybe not. As she often does, sitting at the edge of the scene but missing nothing, his wife Rose quietly corrects him: No, when Troy got out of prison, where he learned how to play the game, he was too old to be taken seriously by recruiters. It had nothing to do with his skin color.

In fact, when Troy battles the city’s racist policy of only letting white men drive the garbage trucks, he wins — something the movie treats almost as a footnote. The movie isn’t about racism, but about the scars of the past, and the ways men pass along to their sons the very best and worst traits they learned from their own fathers. (There’s a reason this Wilson play has often been compared to the prime works of Arthur Miller.)

More than anything, Fences is a deep and engrossing character study, introducing us to a man deeply charismatic one moment, woefully flawed and blind to his own mistakes the next. In other words, he’s fully human. And we see the changes time and his decisions wreak upon relationships among spouses, parents and their children, and even among friends — as we see Troy’s bluster and refusal to admit to his own flaws affect even his sturdy bond with his buddy Bono.

Fences wasn’t Wilson’s first production on Broadway; Ma Rainey’s Black Bottom made it there three years before Fences opened in 1987. But it’s the play that brought him to a higher level of national attention, winning him the first of two Pulitzer Prizes. (The second was for The Piano Lesson in 1990.)

The movie is a great vehicle for Washington. His Troy is a gray, paunchy, stubborn force of nature who casts long shadows across his family’s lives. But Davis is the drama’s secret weapon, as the power dynamic shifts from Troy to Rose through the course of the story. As usual, she’s remarkable.

The movie itself is good, not great. This isn’t Washington’s first time as a director; he also made The Great Debaters and Antwone Fisher, films that like this one are admirable, sturdy, and not especially transcendent. He sometimes plays into, rather than against, the occasional obviousness of Wilson’s writing and symbolism. (A pedestrian shot of Rose dropping a rose, for example, or the Hallmark-worthy image of a sunny sky at the end.)

Ultimately, that doesn’t matter. You’re so totally swept up into the language, into the performances, the time flies by in a way that seems much quicker than its two hour-plus length. The movie is transportive, a symphony. It reminds us what a great gift Wilson gave our culture, in his 10-play Pittsburgh Cycle, with each set in a decade of the 20th century. And what a loss is ours that he died in 2005, after such a rich outpouring.