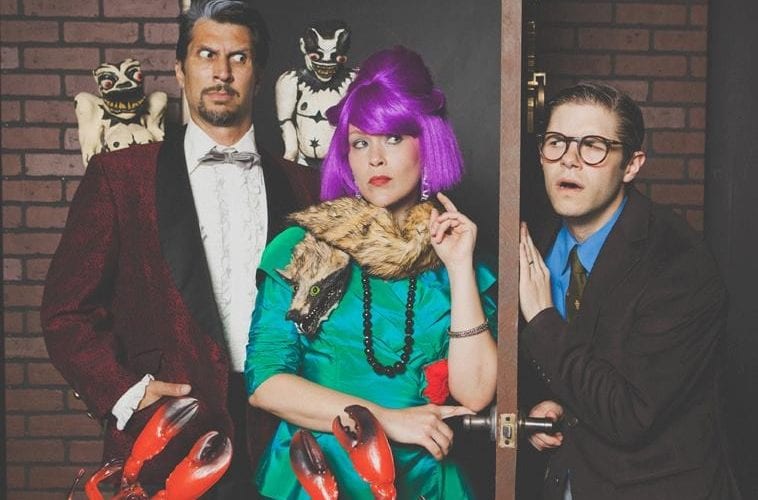 Anyone remember feeling uncomfortable around your in-laws? If so, imagine how you’d feel if a friend dosed you with LSD a few hours before you arrived at their house. Or even worse, you started feeling the effects of the drug while you were giving a speech at your university, thanking it for honoring you for the medical breakthrough you created to help cure dementia.

That’s the premise of “Dementia Juice,” the insane play by Kevin Gillese and Michael Haverty that’s running through July 27 at Dad’s Garage Theatre Company. It’s an appropriate end to the theater’s 18-year run in Inman Park. Developers have purchased the property and Dad’s Garage will use 7 Stages Theatre until it can find a permanent home.

In true Dad’s style, drama, comedy and raunchiness meld in “Dementia Juice.” Tom Rittenhouse plays Daniel, a young soon-to-be-doctor who has developed a formula that may cure dementia. On the same night he delivers his keynote speech to the faculty and his fellow medical students, he proposes to girlfriend Rachel, played by Perry Frost. Then, after his comedic, druggy friend Jerry puts LSD (“the three most beautiful letters in the English language”) into Daniel’s cup of water, the pace picks up.

As his trip intensifies, Daniel tries to stay cool as his imagination starts to play tricks on him. Dramatic music and lighting changes accompany his hallucinations, and his hilarious facial expressions and yelling responses to his bad trip draw loud laughter from the crowd.

The next surprise comes when Rachel’s father, Rodrigo, played by Lucky Yates, explains to the nervous scientist that he and his family are polyamorous, satanic Masons. Rodrigo’s antics are so outlandish that it becomes difficult to tell whether they’re reality or part of Daniel’s hallucinations.

Masks, designed by puppet and mask designer Shitty Bedford, are excellent and give a realistic feeling to Daniel’s hallucinations and the family’s demonic, metamorphic state. Scenic designer Oz Dillman and props designer Melisa DuBois help make the play a success.

The second act effectively has two scenes playing out simultaneously. Daniel has been taken to hell — Bedford’s puppets are wonderful and raunchy in this scene — and Rachel is fighting with her parents as she realizes that they’ve been making Daniel go insane. The back-and-forth between the scenes is well done, but the jokes, which seem intentionally corny during this exchange, especially from Rachel, fall flat.

Daniel, however, continues to deliver the laughs as he fights off demons and Rodrigo in hell. We get pop culture references  throughout the play — in this scene, to “The Wire,” Maroon 5 and Macklemore — and all land successfully.