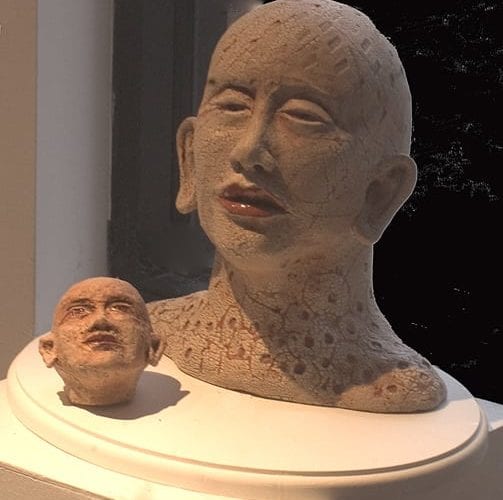 Jim Bell is the standout artist here, with two life-size figures imitating the greenish patina of bronze. “Winged Kudu Man” features copper wings attached to a ceramic naked male torso complete with realistic genitalia, but with an antelope head instead of a human one. The companion “Tempest” (at left), a statue of a naked young woman, appears perfectly realistic from the front, but the back of the head enters the territory of metaphors or allegories of memory: a naturalistically tinted diorama inset depicts a young girl watching a tornado bearing down on her placid neighborhood. This is familiar enough territory, but Bell’s skill in rendering and tension-filled composition make the piece simultaneously appealing and discomfiting, as the composition suggests both past trauma and present psychic discontents.

The other artists in the show mostly offer female figures of one sort of another. (Michael Klapthor’s quite different, near-slapstick allegories almost seem to belong to a different show and deserve attention at some later date.) Annie Evans’ “Spine,” a nude with steel-rod spine and skeletal pelvis, is one of several semi-realistic figures that spiral off into visual allegory. In the companion “Structure,” a more realistic spine is exhibited by a woman who opens her torso to reveal it. All of Evans’ figures feature some sort of inner revelation or another, metaphors for strength being only one of her themes.

Angelika Domschke’s nearly life-size sculpture, “Thoughts of Life,” is a contemplative female with a bindu dot on her forehead and a realist painting of twilit winter woods on her body. The technique and the suggestion of spiritual exploration are enough to capture the viewer’s attention without asking too deeply after the piece’s meaning. 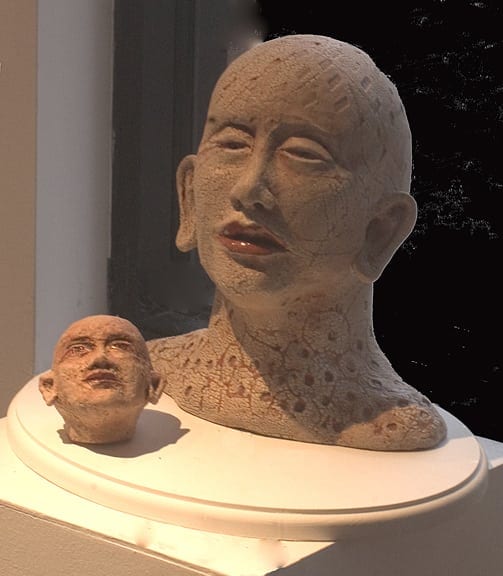 The sense of psychological unease mingled with spiritual solutions permeates the exhibition and highlights the curious intuition that this work exists in an intermediate aesthetic zone that is too darkly probing to allow the viewer anything less than a full-fledged emotional encounter, but too beholden to visual conventions associated with sentiment to allow the work to seem fully contemporary. Juliana Zorka’s hollow female torsos, for example, are strangely archetypal and no less disturbing for being in the uncomfortable position of being too decorative to be truly edgy and too unsettling to offer easy comfort. Melinda Crider has always considered her delicately rendered portrait heads to be lyrically archetypal, but put in this context they seem more literal-minded than spiritually metaphoric. Not, as Jerry Seinfeld famously said, that there’s anything wrong with that.

The show, extended through February 15, is worth the challenge of finding a vacant parking space, though the Decatur MARTA station, directly across the street, offers an alternative method of arrival.