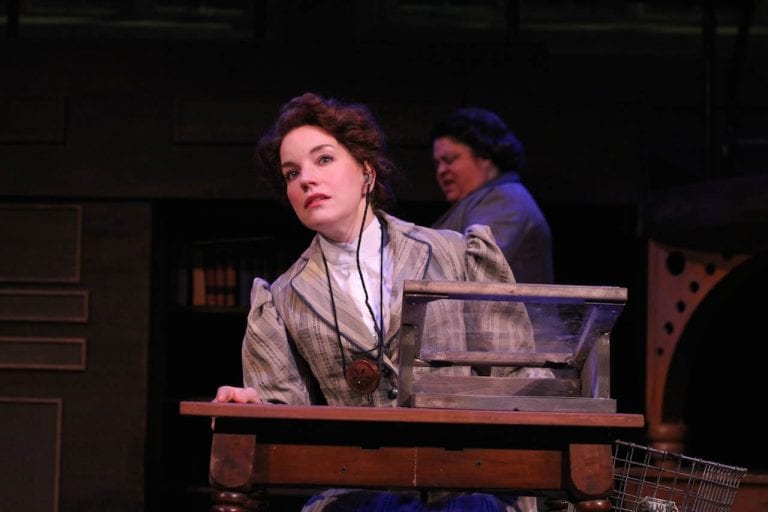 If you haven’t been a big theatergoer lately, Theatrical Outfit’s new production Silent Sky, onstage through March 8, could act as a simple reminder of what a pleasant, thought-provoking evening at the theater ought to look like. It’s a lively, funny, accessible play that’s alive with interesting ideas.

The two-act play is by Decatur-native and Emory University graduate — now San Francisco–based — playwright Lauren Gunderson. Her award-winning works, like Silent Sky and Émilie (produced in Atlanta by the Weird Sisters Theatre Project in 2013), often explore the experiences of women in science.

Silent Sky tells the story of the real historical figure Henrietta Leavitt (Elizabeth Diane Wells), who — though she eventually made major, groundbreaking discoveries in the realm of astronomy — initially worked in a subsidiary role in the Harvard observatory. She was delegated to a job that was then called a “computer,” someone who did the drudge work of crunching numbers and cataloging the placement of stars from photographic plates for archival purposes.

Leavitt worked for Harvard astronomer Edward Charles Pickering, who decided to hire women as his computers, likely as a money-saving strategy. His staff became known as “Pickering’s harem,” a term that likely gives you some idea of the obstacles that Leavitt and her colleagues faced.

Among the best scenes in the play are the interchanges between Leavitt and the other members of the “harem,” comic parts played to perfection by Carolyn Cook as the no-nonsense Annie Cannon and Deadra Moore as the plain-dealing, tough-as-thistle Scotswoman Williamina Fleming.

Their insightful quips and forbearance of male clumsiness and vanity make for some of the show’s best moments. Pickering is a character who’s much spoken of but never enters. His interests are here represented by his assistant Peter Shaw (the excellent Brandon Partrick), who becomes both a love interest and antagonist to Leavitt.

Fans of the recent Alliance show The Geller Girls will be well served at Silent Sky. The shows share a basic sweetness, intimacy and empathy in their approach. Like Geller Girls, Silent Sky is also the story of two sisters; we see the frustrations of Leavitt, who, like the elder Geller girl, longs to enter a male-dominated world, and her somewhat more conventional sister Margaret (Cynthia Barrett), who follows a more traditional path with a husband and family.

The play encapsulates an entire adult life into two acts; towards the end of the second act, things can feel a bit accelerated and condensed. Costumes, hair, scenery and mannerisms don’t change, but we often enter a scene to find that several years have passed or that we’ve changed locations. There’s no confusion — Gunderson is an expert at placing us both in a specific time and place and in the emotional world of her characters — but we drift so much that we feel pulled away from the central dramatic situation, which seems to lie in the observatory.

Still, Silent Sky makes for a lovely evening, and I think Atlanta theatergoers — the avid, the regular and the not-so-much — will love it.