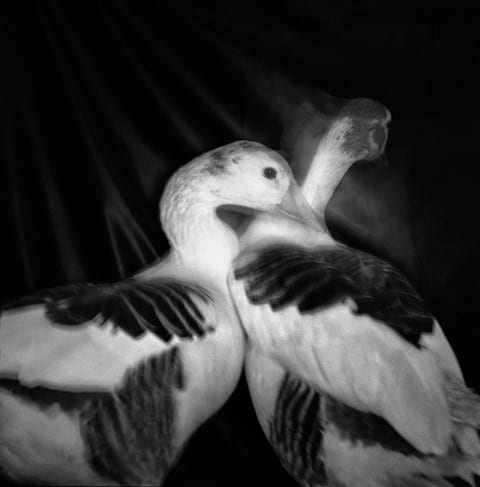 When asked what helps her maintain her enthusiasm for long-term projects, documentary photographer Debbie Fleming Caffery puts it simply: people.

She credits the strong Cajun and African-American women with whom she grew up in southwest Louisiana, along with her grandfather, as the reason why she has persisted in photographing the struggles and hardship of her community. From her time spent documenting life in the cane fields or the ravages of Hurricane Katrina, she has amassed a collection of haunting yet powerful images.

The Guggenheim fellow takes a more cheerful approach in her latest book, Alphabet (Fall Line Press), in which photos she’s selected from her archive illustrate each letter. A desire to share her work with her three grandchildren and educate them about art inspired Alphabet, but calling it a children’s book is somewhat deceptive. William Boling, her publisher, says it is “a children’s book disguised into an art book.”

This is not far from the truth. From the inside out, it has the look and feel of a book made for an art collector, with a heavy hard cover and a luxurious velvety dust jacket. The quality of Caffery’s black-and-white photographs — she is a master printer — is faithfully reproduced, exemplified by the deep tonalities of her blacks. Though evident in all of the 26 square photographs this is best exemplified by the image for the letter G — also the cover image — a lyrical piece in which a pair of white geese, their black wings entwined, lock in an embrace.

Designed beautifully by Laurie Shock, the book uses an eye-appealing font, which reminds us of the intrinsic beauty of lettering at a time when teaching children cursive has gone out of fashion.

However sophisticated, the book retains a playful quality that makes it enticing for children and adults alike. If the general concept is simple, some letters are open to interpretation. For instance, options abound for the letter L: is it the lake in the background, the lad climbing a tree, or the latticed curtains showing in the foreground, on which a lizard lies?

Even when the connection seems obvious — H for hamburger, C for cake — the reader is tempted to look deeper.

Oftentimes, the photos evoke a childhood memory: R is for the rabbit taken from the magician’s hat; Z is for Zorro’s outfit. But on some occasions, Caffery deviates from her ludic repertoire and offers a more serious take. This is the case for the letter F, for which she chose to depict a fish, lying flat on his belly, looking away with an undecipherable expression.

In the end, Caffery strikes the right balance in choosing imagery that blends realism and a sense of wonder. She engages both heart and mind, making Alphabet alluring for readers of all ages.

Caffery will exhibit a selection of prints at Jackson Fine Art during the month of October. She will speak at the book launch party, co-hosted by Fall Line Press, on October 20.