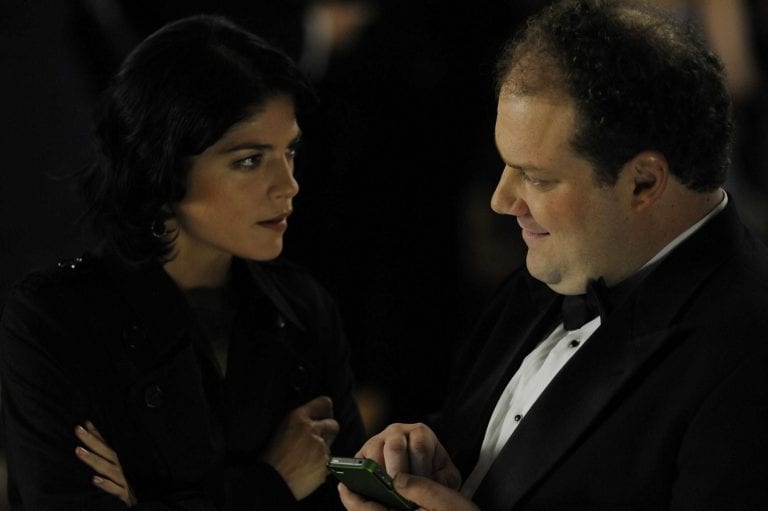 Selma Blair and Jordan Gelber as the unlikely couple in "Dark Horse."

In “Dark Horse,” the newest unlovable loser from writer-director Todd Solondz’s stable is Abe (Jordan Gelber), a 35-year-old New Jersey manchild who wears his name in silver letters around his neck as if he might forget who he is. And who he is is a very unstable thing.

Still living at home with his realtor father (Christopher Walken), for whom he also works, and his pampering mother (Mia Farrow), Abe is a doughy nonentity who swaggers with confidence in charms he doesn’t possess, boasting about things he hasn’t accomplished. Well, that’s when he’s at his best. At other times he resembles a tottering ice cream parfait of infantile id, forever melting down.

At a wedding (to which it’s hard to imagine anyone inviting him), he meets Miranda (Selma Blair), a woman so immobilized by depression that she can’t find a way not to give Abe her phone number. On their first date, ignoring that she forgot he was coming to take her out, Abe proposes. She declines. But later, when she haltingly accepts a kiss, she mutters, “Oh my God, that wasn’t horrible.”

So far, so good. Mismatched couples have made for good movies in the past, from “Marty” to “A New Leaf” to “Harold and Maude.” But “Dark Horse” never seems quite sure what it’s actually about. As Abe, a character who’s impossible to find endearing, clumsily tries to make a life for himself with Miranda, the movie starts taking side trips into his fantasy life. A lot of these digressions focus on his dad’s secretary Marie (Broadway diva Donna Murphy). In real life, she’s a mousy thing who, like Abe’s mother, needlessly coddles the slob. In his fantasy life, she’s a rich widow, part Mrs. Robinson, part Phyllis Dietrichson from “Double Indemnity.” This is amusing, and Murphy gives it her all, but why we’re entering these fantasy segments never really becomes clear.

In the film’s second half, after we’ve fallen down a number of these rabbit holes, it’s hard to know what’s real or not. Or to care so much. The movie feels like a bunch of pieces that haven’t had time to properly cohere, or a toy that came without instructions and was put together slightly the wrong way.

Fourteen years later, nothing Solondz has made has beaten his misanthropic masterpiece, “Happiness.” But at least he’s consistent. His despairing, deadpan viewpoint hasn’t changed much since he crossed the critical threshold with “Welcome to the Dollhouse.” He hasn’t grown up — or, at least, grown much deeper. But I still prefer his films to those of some other, instantly recognizable stylists working today, such as Wes Anderson and his petrified, preppy world.

“Dark Horse” is acted with commitment. But how strange it must be for an actor to deserve acclaim for a revolting performance. Gelber deserves that backhanded compliment for his awful Abe. Walken, under a godawful toupee, acts mainly with a comical glare of disbelief that this moron of a son could have originated from his own loins. And Farrow limns a sweetly deluded mother figure whose endlessly nurturing instinct is ultimately toxic.