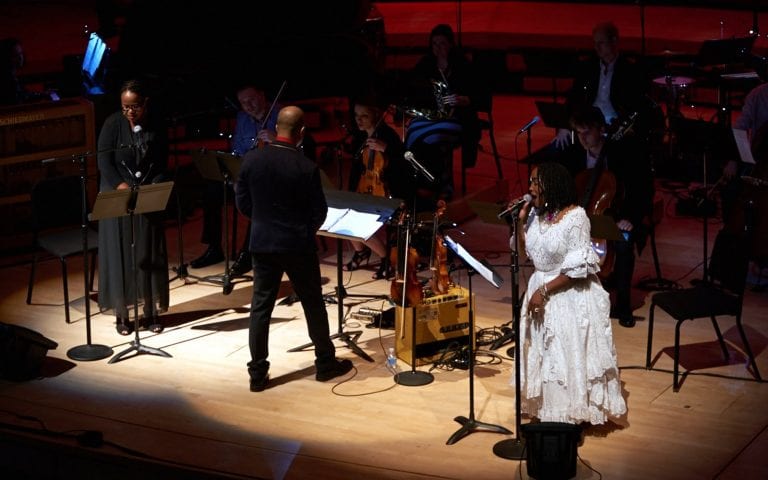 On Friday, Emory University’s Schwartz Center for Performing Arts hosted a concert of music by Daniel Bernard Roumain, a violinist, conductor and composer of Haitian American cultural lineage. Roumain is classically trained but incorporates elements of funk, rock, hip-hop and other contemporary genres into his compositions.

His violin playing most prominently features technical and stylistic gestures that are quite at home on his instruments, but are more familiar to the general public from the world of electric guitar.

The highlights of this section were vocal music, such as  “On the Edge of Night” with texts by Yona Harvey, winningly sung by Pittsburgh-born vocalist Anqwenique Wingfield, and “Merci Bon Diei,” a traditional Haitian song made popular in the United States by Harry Belafonte in the 1950s, sung in this concert by the eminent Haitian vocalist Emeline Michel.

The promoted centerpiece and culmination of the concert was a work specially commissioned by Arts at Emory: “Anacaona, The Golden Flower Songs,” for which Roumain wrote the music — the vocal elements were co-composed with Michel — in the context of a narrative libretto by Haitian author Edwidge Danticat. The name Anacaona in the language of the Taíno peoples means “golden flower.”

Before advancing to issues of the libretto, it is worth noting first there was a historical Anacaona, who was one of only two female Taíno chieftains in the last decade of the 15th century, when the expeditions of Christopher Columbus arrived at the island of Ayiti, now known as Hispaniola, from which the French name Haïti was derived.

Anacaona was part of a family of chiefs. Her brother Bohechío was chief of Xaragua on the island’s southwest side. Her husband Caonabo was chief of the adjacent Maguana territory. The Taíno peoples had long before migrated to the Caribbean from South America, as had their primary indigenous rivals, the Caribs.

Anacaona and her brother were observed to be equals in the negotiations with Columbus when he visited Xaragua in 1496. What at first seemed peaceable went bad quickly, as the Taíno peoples came to realize too late they were being conquered — killed or enslaved by the European invaders. Anacaona was executed by hanging, in 1503, at age 29, for refusal to become the concubine of a conquistador.

The Danticat libretto, however, is stylized in the manner of folk-mythology, and a highly syncretic one at that. Nominally touching on history, such as the ominous arrival of Columbus’ ships, it instead curiously conflates the story of Anacaona into a parallel of the biblical Genesis creation story, positing her as “the first woman” in place of Eve. In place of Adam, “the first man” is Odùduwà, legendarily the founder of the Yoruba people, an ethnic group originating in what is now Nigeria and Benin in West Africa.

Odùduwà, who lived over a century before Anacaona, was posthumously deified in Yoruban religion, and here serves as Anacaona’s spirit guide. That such disjunctive elements appear in this story is not entirely a surprise, as Haitian Vodou is itself syncretic. Practiced almost exclusively in Haiti and the Haitian diaspora, it has incorporated into itself religious elements from the Yoruba and other West African peoples, from Taíno religious beliefs, from Roman Catholicism and other seemingly conflicting influences.

By contrast, the synopsis of the story printed in the program booklet, does not itself include the syncretic elements of the narrative’s creation myth, in part outlined above. It also, in a broad-brushed manner, deviated in detail from historical record, in the manner a Hollywood script would change a historical account to create a more “directed” story line.

In the end, the synopsis assesses Anacaona’s hanging as “starting a genocide that would wipe out her people.” It is absolutely true that the conquistadors killed many, many Taíno either by gunshot or in more cruel and barbaric ways, such as cutting off their hands and allowing them to bleed to death. What actually wiped out the Taíno people, however, would only come some 20 years later in the form of a smallpox epidemic.

The summary concludes the story’s end as being the beginning of another, “a new world continually washed in endless streams of blood.” And that is the nut of the work’s sociopolitical message. One need not analyze further.

Obviously, what was intended to be essentially a musical critique of this work has weighed heavily upon issues of history, mythology and sociopolitics instead, but with good reason. Happily, Michel’s vocals were well rendered and passionate. Unfortunately, the overall impact of Roumain’s music for “Anacaona, The Golden Flower Songs” is not all that remarkable and hinges almost entirely upon the sociopolitical themes in which it is enwrapped, rather than upon the music itself.

That is a shame, in as much as it is such extramusical things to which the art all too often finds itself indentured.