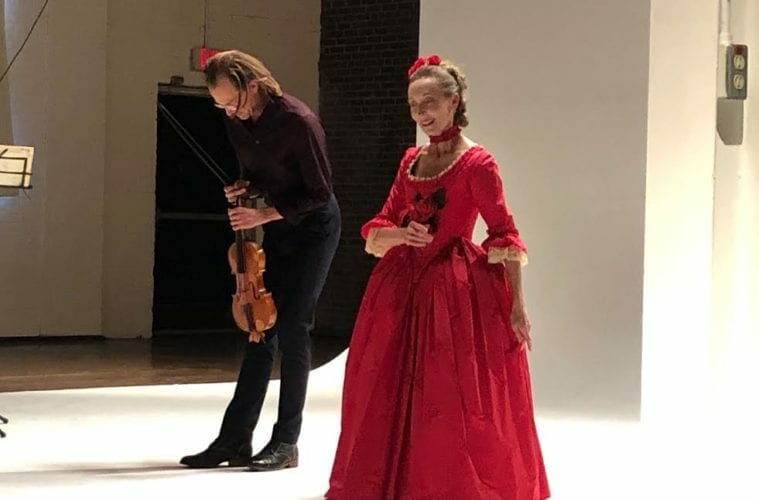 In the rare moments when baroque dancer Paige Whitley-Bauguess stood still Friday night, her long red dress, with its 18th-century-style side hoops, touched the floor. But when she moved, executing delicate little hops, jumps and turns, her dress seemed to bounce off the floor, revealing her ankles, hose and low-heeled shoes. Her solo, Partita, launched a mini journey through dance history in Atlanta Baroque Orchestra’s Bach in Motion inaugural summer festival at Ambient+Studio in southwest Atlanta.

As a pandemic precaution, only two Atlanta Baroque Orchestra musicians played in person: associate concertmaster Evan Few, accompanying Whitley-Bauguess, did Partita #3 in E Major for violin; artistic director and concertmaster Julie Andrijeski made her solo viola debut in Suite #1 in G Major for Cello for choreographer George Staib’s Crevasse 5.0. Guest artist Stephanie Winters, on prerecorded video, played Suite #5 in C Minor for Cello to accompany solo dancer-choreographer Julia Bengtsson. The video was the evening’s one disappointment. It was flat and grainy and too small for the space. Regardless, Bach’s brilliant virtuoso suites prevailed throughout in the studio’s excellent acoustics.

It was fascinating to see the seeds of classical ballet in Whitley-Bauguess’ solo: the pointed, slightly turned out feet, the controlled little jumps and beats, the relaxed second position of the arms. Dance and cultural history came alive.

Bengtsson’s solo combined baroque and contemporary dance vocabulary with high extensions, a flexible, expressive torso and drops to the floor. She used a long piece of off-white silk as a prop, at one point gesturing as if writing on it, at other times holding it aloft like a bridal veil or bunched in her arms like a baby. Based in New York, she dances and choreographs with Winters’ Bach Cello Suites Festival Project. Her intent in Friday’s solo was to question whether Anna Magdalena Bach, the composer’s wife and copyist, would have made different choices if she lived today and didn’t have to choose between family and career. Bengtsson gave an emotional performance, beautifully articulated, and wore a long, period-inspired dress, lighter than Whitley-Bauguess’. She danced barefoot, foreshadowing what was to come. 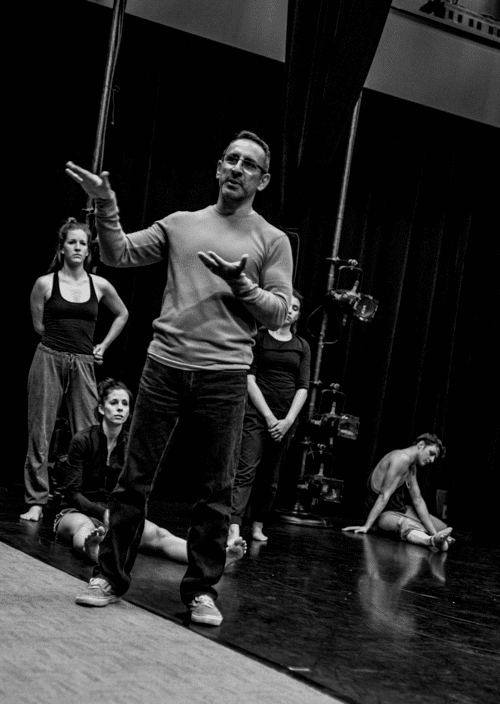 The program skipped over classical ballet — the dance genre that made pointe shoes de rigueur — and leaped to a volcanic eruption of barefoot contemporary dance in Staib’s Crevasse 5.0. The dynamic work used the studio’s dazzling, white cyc or infinity wall, and the technical strength and intense focus of dancers Patsy Collins, James La Russa and Laura Morton, who also contributed to the choreography.

They brought a small rock into the space, carried it, used it as a pillow and then dropped it with a loud thud, setting into motion an explosion of movement, floor work, lifts and jumps. A turn of the head and a lean to one side was a persistent theme, expressing uncertainty, a lack of equilibrium. In quieter moments, the dancers quivered with pent-up energy or held tightly to one another, touching each other’s faces. It was great to see such close contact between the dancers after months of COVID’s “don’t touch” prohibitions.

Clothing played a crucial role. We watched a lightly perspiring woman in a full-length gown, shoes and up-do, and shortly after, three bare-legged dancers sweating through their tank tops and spandex shorts. It was a potent visual reminder that dance expresses the social mores of the time in ways that program notes, even the excellent ones in Friday’s printed program, cannot fully describe.

The musicians stood in a corner of the space throughout the concert, giving the dancers center stage, at least visually. Still, Bach’s music reigned, its danceable rhythms providing backbone and structure for the wildly diverse movement expressions. Bach in Motion ended with a champagne reception. Most audience members stayed and several unmasked for a glass of bubbly. COVID, bye-bye.