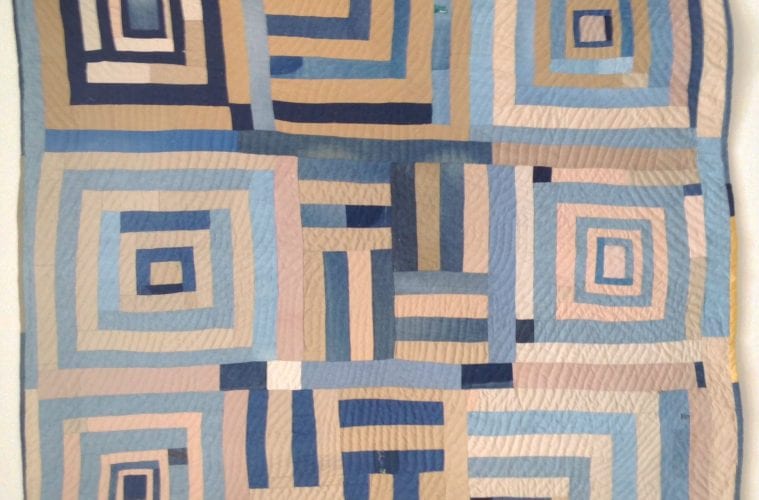 Review: Cut from the same cloth, The Hudgens showcases the designs of four Southern women

Four Southern women — two from Alabama, two from Georgia — are the featured artists of Made: Handcrafted in the South, on view through September 24 at The Hudgens Center for the Arts in Duluth. The exhibition showcases the work of Natalie Chanin, Susan Hable, Rita Mae Pettway and Rebecca Wood, rightfully bringing their work into the institutional fold. Displayed against the fresh white gallery walls, the functional purpose of the objects is de-accentuated, allowing the works to be appreciated as objets d’art. The exhibition opens with a long corridor featuring quilts by Pettway. Though over 70 years old, Pettway is on the younger end of the Gee’s Bend quiltmakers, whose surviving quilts date to the first decades of the 20th century, but she is the senior artist of this show. Pettway comes from a tiny, predominantly African-American community in Alabama whose origins date back to the Antebellum era. The quilts were introduced to an international audience via William Arnett in the early 2000s. Their superficial similarities to Modernist art duly noted, the quilts evolved out of quilting practices of Southern slaves who were, in turn, influenced by West African textiles. Pettway’s quilts for this exhibition are all recent creations and allow viewers to see the subtle, thoughtful details: a 2015 quilt made of a loose network of faded denim and khaki is accentuated by a single, unexpected square of white; a 2016 quilt features a tiny ocean scene flanked by palm frond motifs within a field of mostly solids, florals, and paisleys.

Situated near the center of the gallery, Susan Hable’s “Untitled (Chairs)” consists of two 18th-century style chairs covered in angular neon pink-and-green patterned fabric. One such chair also appears in a kid’s room in Hable’s recent book A Colorful Home: Create Lively Palettes for Every Room, included as part of a collection of books related to the artists of Made.  A nearby wall is dominated by various surface designs that are overlapped by source images and stained screen used in the printing process. The intermingling of finished designs and process tools makes an appealing installation, highlighting Hable’s intuitive mastery of color and providing insight into her process.  Hable also exhibits simple, Matisse-like drawings of plant forms. Throughout, the importance of nature as inspiration is evident.

Wood’s appealingly hodgepodge assortment of more than 90 ceramic plates showcases the designer’s intuitive ease with clay and glaze. The plates date from 1991 to the present and are arranged chronologically. Wood’s style is easy to recognize. The surface is irregular, and glaze is applied so that tiny areas of raw clay show through. Wavering contour lines — like Hable, mostly organic, nature-based schemes — provide simple decoration. Wood explains her interest in the medium in wall text: her interest began after experimenting with china painting, which inspired her foray into the production of durably glazed — not painted — dishware. Her business grew and today she manages a successful production company in Athens. Also on display are sculpted birds and large, abstract ink renderings of flowers by Wood; the latter feel especially at home near Hable’s drawings. Natalie Chanin of Alabama Chanin designs clothing made of organic cotton. In an interview that is part of the exhibition, Chanin explains the origin of her business in 1999: living in New York, she couldn’t find the support or labor to produce clothing sewn by hand, but her hometown, Florence, Alabama, had a pre-existing tradition of clothing production and a workforce in need of jobs. “Made” includes four ensembles by Chanin in black, gray, and neutral colors alongside stencils and swatches. Though the palette is subdued and often monochromatic, the surfaces are rich with appliqué and embroidery. The simplest outfit is “Frida Long Skirt with V-neck Casual Tee with Little Stars Stencil and Dots + Dash Stitching.” A vertical pattern of star-shaped rosettes and stitches subtlety enhances the top, which ends mid-hip. A long, black skirt creates an elegant and dramatic silhouette, and as the title may hint, perhaps pays homage to Frida Kahlo’s signature flowing Tehuana dresses.

Chanin’s ability to use art history to inform her own visual language is impressive, and her design ideology is likewise informed by the past. Alabama Chanin’s website includes this passage: “WILLIAM MORRIS ONCE SAID, ‘HAVE NOTHING IN YOUR HOUSE THAT YOU DO NOT KNOW TO BE USEFUL, OR BELIEVE TO BE BEAUTIFUL.’ WE AGREE.” Chanin’s citation of Morris is spot-on; it is the philosophy motivating today’s craft.