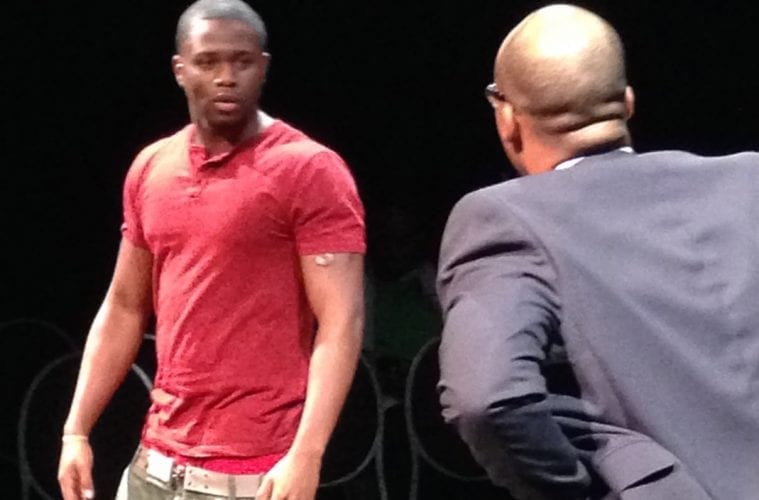 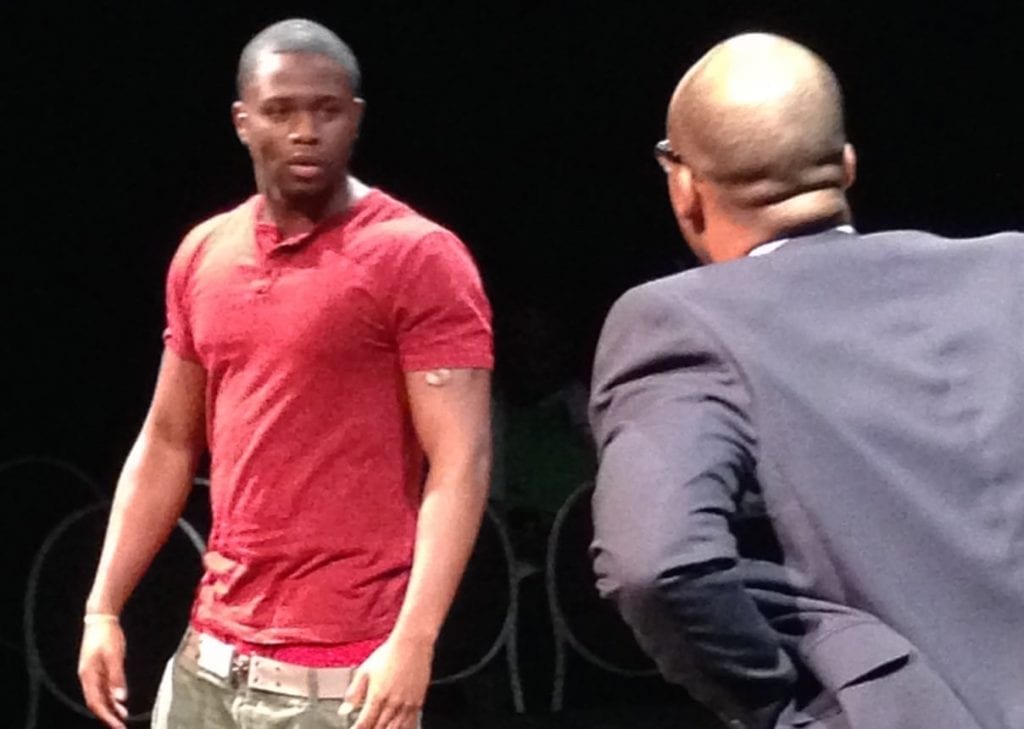 Two new one-act plays by Atlanta playwright Paris Crayton III, one of ArtsATL’s “30 under 30” artists to watch, both take on the difficult subject of urban gun violence and are paired together at the Porter Sanford Arts Center through September 14. The show marks the final production in the debut season of Rising Sage, the theater company Crayton cofounded with managing director Kirk D. Henny.

The two plays (they each clock in at about 45 minutes) are fitting companion pieces: Chainz is performed by four male actors, while Broken is performed by five female actors, giving two different perspectives on similar subjects. Chainz opens as four men, recently arrested at a protest against police violence that turns into a melee, are locked into a holding cell. Though they’re all from very different walks of life (they include a successful, no-nonsense Ivy League–educated business executive, a street-toughened teen, a homeless man and a peace maker who tries to maintain a sensible balance as tempers flare), they’re stuck together for an indefinite amount of time.

Unpacking what happened at the protest to get them arrested (and arguing over who’s at fault) becomes the first order of business. But as they speak with each other, they begin to delve more deeply: arguments, and even more violence, ensue, but the characters also begin to question their various roles in the broader picture and how they play into the issue at hand.

The actors do a great job of fleshing out four very different characters who are suddenly faced with the intensely intimate environment of a prison cell. I especially admired Carlus Houston as the homeless man George, who attempts to take the long view but finds himself more and more drawn into the adversarial clashes between the other characters. I could believe that the button-down character Emmett (Kenneth Camp II) held the others at arm’s length, but I was surprised that his snobbery emerged so quickly: he seems like a character who would at least try to keep up a front of solidarity and efficacy.

The bulk of the action of the play takes place in a short amount of time in a relatively small space (a cell), and I thought the show would have packed an even more powerful punch if entirely set in real time (there are several blackouts and we see a couple of the characters outside the cell making their one phone call), capturing the inescapable pressure-cooker environment of a prison cell.

The questions or concerns raised in the play don’t have easy answers, so I was surprised when Justin Smith as the peace maker Jordan (who comically often ends up bearing the worst blows of the violent clashes) asks what good protesting, or any action, does. It’s an understandably despairing question, but I thought George’s answer about having one’s voice heard was too pat for the sort of central, existential uneasiness that the character is evoking.

Broken shares many of the same themes, but approaches the subject with a very different style. Five female characters share their stories of losing a loved one to gun violence, in a series of monologues that are interspersed with haunting a cappella renditions of familiar gospel tunes. The tales are harrowing, and the actresses convey one of the most moving elements of Crayton’s writing here: the juxtaposition of small everyday concerns (getting the kids to school, cleaning the living room floor of Legos, etc.) with the sudden, earth-shifting impact of senseless violence. I especially liked a scene of morning gossip around a Sunday breakfast table, with one of the adult women actresses taking on the role of a silent, sullen teenage boy in a hoodie. It most thoroughly allowed the audience to connect to the characters before violence shatters their lives.

Chainz/Broken is not an easy, comfortable or conventionally “entertaining” evening at the theater. But a brief talkback after the show suggested the crucial, mission-driven role that the new Rising Sage Theatre is playing with the shows. Several viewers in the audience shared emotional stories about how they’d lost a loved one to gun violence, and many shared the same sort of concerns expressed by characters in the plays. What can be done, seemed to be a question of both characters and audience: there is no easy answer to that question — the weight of despair in the second half hits that message home — but certainly gathering as a community for art making and discussion is a small but inarguably positive first step.