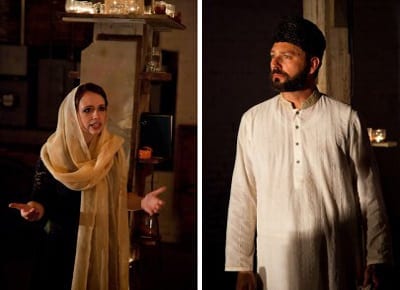 When the economy goes sour, smart, engaging theater can be hard to find. Theaters typically scale back, mount breezy comedies and play safe bets during tough times. August can be especially dry, too, a calm before arts organizations prepare for the stormy and challenging season ahead. That’s one of the things that’s so delicious about the Collective Project’s new production “The City of Lions and Gods.” In the off-season, at this trying time for the arts, it felt like picking up a crumpled old copy of The New Yorker and unexpectedly finding yourself engrossed in a fantastic short story by an author you’d never heard of. The show is the first play to be performed at the blossoming Atlanta arts community the Goat Farm, and it’s an auspicious start. Written by the Project Spark ensemble, it’s an intelligent, tightly scripted and moving historical drama. It will run through August 19.

“City of Lions and Gods” is set in India and tells the story of Mame, a woman newly married to the older, wealthy political leader Khan. Their life unfolds as the Muslim states of India are struggling to break away as the independent country of Pakistan. This impressive work was created as a collaborative project by the actors themselves, and their connection to the surprisingly rich material is clear in every scene. It’s a testament to their work that a story set in a somewhat unfamiliar time, place and political situation sustains rapt attention. The action moves back and forth through time, sometimes passing over years in a few moments, but such transitions are handled expertly.

Mame, played by Marium Khalid (top photo), is a sympathetic and nuanced protagonist: fiercely committed to Pakistan’s political independence and devoted to her husband, but also intellectually independent, modern, literate and angered by the conflicts that are the inevitable result of religious fundamentalism. Phillip Justman, who earned his chops playing the seducer Trigorin in Fabrefaction’s production of Chekhov’s “The Seagull” in May, takes the part of the equally perfidious (but equally sympathetic and complicated) seducer Groom. Henry Scott is splendid as the earnest political leader Khan (bottom photo). And Becca Potter conveys the torturing, self-conscious feelings of inadequacy of Mame’s sister Miri well. (Photos by Justin Hadley.) Common traps such as preachiness about complex political situations and oversimplified modern harangues against arranged marriages are here entirely avoided. Situations are instead presented in their complexity, and we see the ways in which the political ineluctably insinuates itself into the personal and the personal becomes tangled with the political, and how they are often the same thing. “You’re no longer a child,” Mame scolds her anxious sister on her wedding day. “You’re a wife now.” It’s often little, well-observed lines such as these that carry a whole culture, a world of expectations, received roles and telling emotions with them.

A bit of comic business with a curtain as Mame and her husband-to-be have an early meeting at the marital home is particularly well realized and touching. Also memorable is a hunting scene between Groom and Khan. A lucky shot ironically leads to the inexperienced hunter (but experienced seducer) heading home with the cuckold’s antlers.

These actors don’t work with elaborate sets, but using music, candles, period books and a few simple props, they create the immersive, unadorned present moments that are the hallmark of live theater. We’ve seen the world premiere of great, smart, original theater in the middle of August during cruddy economic times at a venue called “the Goat Farm.” Stranger things have happened in Atlanta, but rarely.