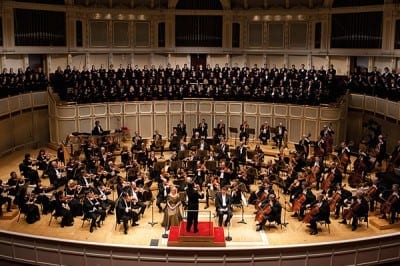 The Cobb Symphony had been in the business of playing the old-time classics for 60 years. But orchestras that perpetually take from the repertoire and never give anything back are no longer living in today’s arts community. They have stagnated into something akin to “heritage tourism,” closer in spirit to a Civil War re-enactment or a Renaissance fair than to a vibrant arts scene. Indeed, a lack of new repertoire — one that energizes and connects with a broader audience — is what had been steering the whole classical music industry off a cliff.

Cobb Symphony Music Director Michael Alexander and his organization, like many groups across the country, have realized this in the nick of time. One year ago, the CSO commissioned a local composer to write a piece of music, the orchestra’s first-ever commission. The concert was sold out, and the orchestra earned as much applause for a fine performance as congratulations for doing what is essential for the health of its art. 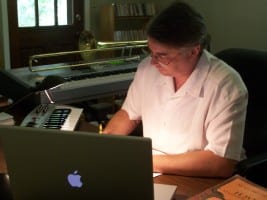 Eric Alexander at work composing, with trombone at the ready.

It wasn’t a fluke. On Saturday night at the Murray Arts Center in Kennesaw, the CSO gave the world premiere of “Autumn Moonlight,” music it commissioned from Eric Alexander, 51, a composer and trombonist in the orchestra. The composer (who is no relation to the music director) was a funny guy with a microphone, introducing his work with a few jokes: “Hearing a composer talk about his composition is as boring as hearing a plumber talk about plumbing.” He placed himself in the “pop-jazz world,” and his program bio lists theater and musicals to his credit, along with backing gigs for Tony Bennett, Dr. John, Al Jarreau and Barry Manilow. For his five-song cycle, for soprano and orchestra, Alexander found inspiration, and poetry, from a collection of children’s verse.

The moon shone prominently in every poem. The first “song” was a setting of five short poems strung together like beads, including haiku from Japanese master Matsuo Basho and a once-controversial poem attributed to Hilda Conkling. The composer started with a bright, exotic, inventive soundscape: a combination of harp and flute and the highest registers of the piano evoking Japanese music, anchored by harmonies familiar from Copland’s “Appalachian Spring.”

Elsewhere Alexander tapped more conventional sounds, at once optimistic (in a New Deal or 1950s way) and familiar, which bathed the whole cycle in a retro-Americana nostalgia. That imaginary era is called “the good old days.” It’s the same basic soundworld appropriated by the Atlanta Symphony’s “Atlanta School” of composers, which has achieved remarkable success winning over local audiences and thus connecting with a living art.

To the listener — whether the composers intend it or not — this style of composition carries social and political baggage. For segments of our society that feel culturally embattled today, this style offers a return to the “comforting” era right before musical composition, or our nation, slipped off the rails and into the social and political upheavals of the 1960s. (Is retro-Copland thus “red state” music? Is that too literal a reading?)

Throughout, Alexander’s text setting was clear and mostly one syllable to a note, which made the occasional melisma seem startling. Bits of scene painting carried us along, with a trombone “moo” at the mention of cows in the setting of J.R.R. Tolkien’s “The Man in the Moon Came Down Too Soon,” or a gentle waltz when asked “Do you dance, Minnaloushe?” in W.B. Yeats’ “The Cat and the Moon.”

The cycle was written for Nila Alexander, the composer’s wife, a former early-music opera singer and now a choir director in Kennesaw. The vocal writing in “Autumn Moonlight” is not for an operatic voice, but for a trained soprano. In all, the song cycle reminded me in places of Barber’s beloved “Knoxville: Summer of 1915,” with its relaxed, singing-on-the-porch-after-supper delivery. Elsewhere, bits that would fit in James Horner’s “Titanic” soundtrack puffed up an otherwise down-to-earth and affectionate song cycle. The performance, not ideal, conveyed the music’s essence.

For this concert, the CSO was scaled down to its 21 core members. Conductor Alexander sported a black silk Chinese formal jacket — a memento from his recent travels — and began with Richard Wagner’s “Siegfried Idyll,” a birthday present to Wagner’s wife, Cosima. (Imagine being married that monster? Now you can read about it every day: Cosima’s diary is on Twitter, with entries corresponding to the correct date.) The wind playing was scrappy and the intonation from the violins and violas poor, making the mostly professional CSO sound like an enthusiastic community orchestra. Alexander conducted this poignantly beautiful music at the surface, moment by moment, without lyricism and without shape or depth. 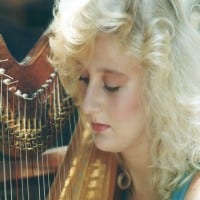