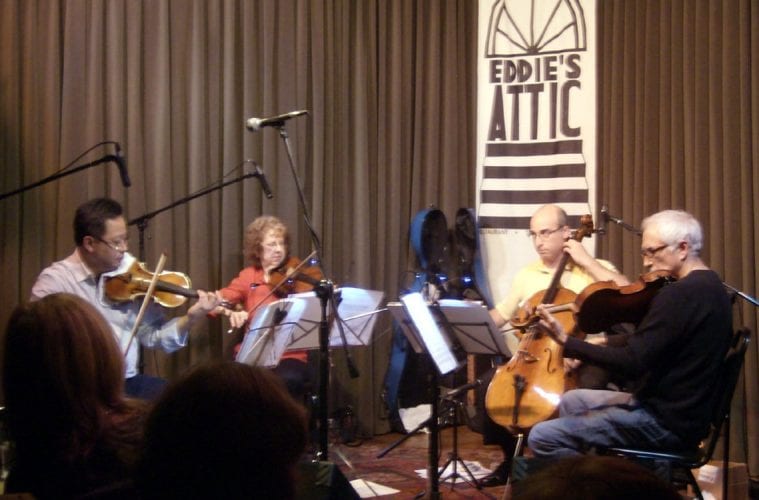 Eddie’s Attic in Decatur continued its exploration of classical music on Wednesday evening, hosting a performance by the Franklin Pond Quartet: violinists Jun-Ching Lin and Carolyn Hancock, violist Paul Murphy and cellist Daniel Laufer. All are members of the Atlanta Symphony Orchestra, but the group’s name comes from the fact that all are also faculty of Franklin Pond Chamber Music, an innovative chamber music program for talented young string students that began a dozen years ago as a summer project and has expanded to year-round.

For the informal atmosphere of the Eddie’s show, the quartet selected single movements from larger works and stand-alone one-movement pieces. There was no printed program; selections were announced from the stage. Some were drawn from the classical canon, excerpts from string quartets by Haydn, Brahms and Mendelssohn. Most of the music, however, was less mainline, though firmly on the radar of today’s string quartets.

Among them, the darkly melodic “Crisantemi” (“Chrysanthemums”), by Giacomo Puccini, was composed in a single night in 1890, in response to the death of the duke of Savoy. Though originally written for string quartet, it is rarely heard in that form; through much of the 20th century it was familiar in an arrangement for string orchestra. Puccini also reused its darkly melodic ideas in the last act of his opera “Manon Lescaut.”

Equally dark but more transparent was “Tenebrae” by Osvaldo Golijov, which makes use of Couperin’s “Troisieme Leçon de Tenebrae” as a source for melismatic material that the composer imposes over a pulsating ethereal texture. Even with its borrowings from Couperin, it’s a beautiful piece that feels strikingly original; and yet, as the composer has said, “beneath that surface, the music is full of pain.”

That was followed by the world premiere of “Bharatanatyam,” by Samuel Viguerie, a 17-year-old cellist in the Atlanta Symphony Youth Orchestra whom the members of the quartet only recently discovered is also a budding composer. Viguerie, who was present, cited India as a source of inspiration. (Historically, the word “bharatanatyam” refers to a classical Indian dance form born of attempts to reconstruct the ancient art of temple dancers.)

Using octatonic scales, the work begins slowly, then evolves into an energized, rhythmic fast section before it returns to a more meditative state to conclude. The Franklin Pond players gave it an effective professional first outing. It will be of interest to hear more of Viguerie’s music in the future.

Astor Piazzola’s raucous “Four for Tango” concluded the opening set. Written in 1989, three years before Piazzola died, “Four for Tango” is an example of just how far he transformed the tango from its traditional roots into something entirely different, making use of non-standard techniques to imbue this particular piece with exceptional grit and wit. The quartet played with suitable edge and gusto.

The performance was running later than expected, so the group truncated its final set to two early-20th-century American works: the first of Charles Griffes’ “Two Sketches on Indian Themes” and George Gershwin’s “Lullaby.” By this time, the fair-sized audience was whittled down to about a dozen devoted fans. Those who left at the second break missed two delightfully engaging works.