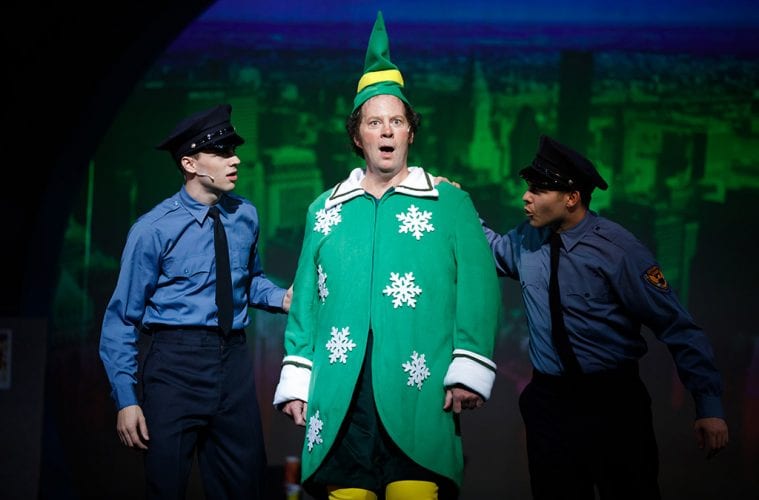 Few ideas seem as inspired as casting Shuler Hensley as the lead in Elf: The Musical at City Springs Theatre. It’s the first holiday show of the company’s inaugural season, where Hensley’s not just associate artistic director but a renowned, Tony-winning performer with a powerhouse singing voice. Hensley’s height and curly brown hair even give him a little resemblance to Will Ferrell, who played the original Elf in the 2003 film.

The only bit of coal in the stocking comes from the book of Elf: The Musical, which retains the breezy premise while only offering a pale shadow of the film’s clever script. Playing through December 16 at the City Springs Performing Arts Center in Sandy Springs, the cast works to transcend its shortcomings with sheer showmanship.

As in the film, Buddy (Hensley) was an orphan infant accidentally brought to the North Pole by Santa Claus and raised by the elves as one of their own. Now that he’s a big, blundering adult, Santa Claus (Steve Hornibrook) breaks the news that he’s not an elf but a human, with a father who works in the Empire State Building.

Buddy’s odyssey from the Arctic to New York is conveyed with some top-notch video projection, and soon he’s a naïve fish out of water on Manhattan’s mean streets. He finds that his father Walter Hobbs (Steve Hudson) is a workaholic children’s book publisher who sings that Christmas is always “In the Way.” He initially dismisses Buddy as a lunatic, while his wife and young son (Wendy Melkonian and Marco Schittone) show more sympathy for the stranger in yellow tights.

Hensley captures Buddy’s boyishness while giving the role more vulnerability than Ferrell did in the movie — it’s like he’s in a state of arrested development, his innocence disarming the cynicism of those around him. Hensley’s resounding singing voice makes an amusing counterpoint to the character’s childlike nature. Buddy’s high spirits infect the employees at Macy’s department store in “Sparklejollytwinklejingley,” one of the more memorable numbers that benefits from Cindy Mora Reiser’s energetic choreography.

While the movie is narrated by Bob Newhart as Papa Elf, Santa Claus introduces the stage show from a lounge chair. Newhart’s brand of deadpan understatement may not suit this kind of stage musical — grumbling dismissively about Tivo, Al Gore and global warming — but the film, directed by Jon Favreau, has a smart sense of irony. The musical’s creators seem bent on sanding down what little edge the movie has and replacing it with weak jokes that seem incredibly dated, even though the show’s less than a decade old. Where a snappier pace would help, Steve Bebout directs the production to fill the 1,070-seat Byers Theatre, so the comedy tends to be slow and broad, not fast and sly.

While most of the songs are unmemorable holiday fare, things pick up in the second act. Buddy stumbles into a Chinese restaurant and meets a group of “fake Santas” off the clock, who bemoan their plight in the number “Nobody Cares About Santa.” With red-suited dancers doing pugnacious moves worthy of “Guys and Dolls,” it’s one of the times when the musical seems to find confidence in its own voice. Similarly, “Never Fall in Love,” a comedic solo from Buddy’s potential girlfriend Jovie, is performed by Autumn Hurlbert, who has such show-stopping chops, you wish the play offered her a juicier role.

Hudson, Melkonian and Schittone are game performers doing their best with clichéd characterizations. It’s hard to feel very invested in whether they’ll rediscover their belief in Santa Claus, especially when the premise hinges on St. Nick being real.

Nevertheless, City Springs’ creative team has worked overtime to offer a holiday confection, replete with garish Christmas sweaters, oversized trees and snowflake-shaped projections. It’s a shame that Elf: The Musical comes across as a show that tries so hard to appeal to the whole family, from the youngest children to the oldest grandparents, that none may find it particularly memorable. At least Hensley and Hurlbert’s performances are gifts worth receiving.