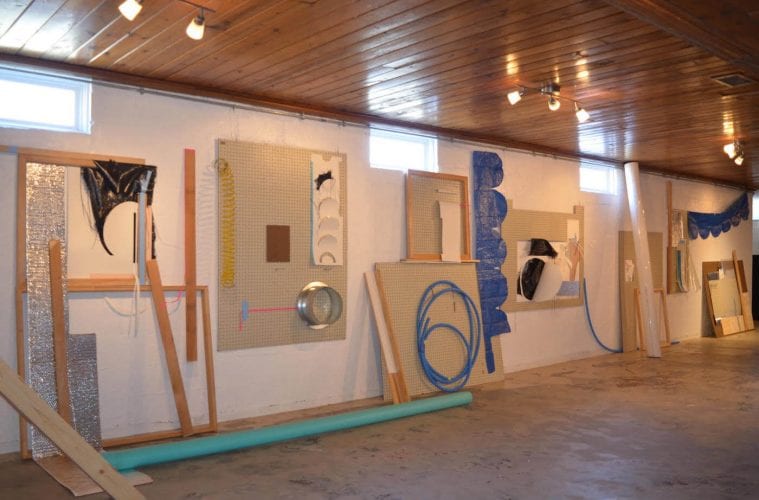 Review: “CHUTE” explores the liminal space between the disposable and quotidian

While today the laundry chute is less common than it once was, it still holds a certain intrigue. Used to funnel away the disposable or as a method of escape, it is the sort of background element that can be easily overlooked — the bulk of it is hidden. Ductwork is the subject of the exhibition CHUTE at Blue Mark Studios presented by Doppler Projects. The show explores the liminal space to describe our relationship with the disposable and quotidian.

Sarah Minor starts off the introduction to THE CHUTE, ETC. with, “For ten years, a recess of three square feet slept at the crown of my head and I never knew its color.” Her visual essay serves as the starting point for all the other work in the exhibition. Minor ruminates on the chute’s evolution, the capacity to be used for mischief and includes its sensational moments in history. Long, didactic paragraphs hug short headlines in style from historic newspapers. In this fashion, the essay’s form mirrors the content, with the chute-related stories traveling down the essay, ordered from past to present. Chewing over its significance, Minor notes that, “Used or soiled material and the need for its storage and transport shapes public and private spaces almost more than any other human need.”

Krista Clark’s 40-foot installation titled The Division and Hierarchy of the Unintentional Sacred Space engages with the subject’s mundane form and recessive quality. On first glance, the installation looks like a spontaneous arrangement of materials from the hardware store — wood, pegboard, paper, sheet metal duct, tape and tarp. Closer inspection gives way to the feeling of precise vignettes with grouping and repetition. Clark, whose work typically manifests as clean architectural abstract drawings on paper, translates her spare geometric sensibility perfectly in her installation. The tension between random and deliberate is satisfyingly balanced.

A similar unassuming design can be found in Meta Gary’s Recollection, a work that rewards curiosity. My first impression was that it was a black pedestal, but it is, in fact, hollow. When you peer down into this square column you discover a video screen in the bottom with TV color test images falling away — representing memories that are discarded, recycled or forgotten. Recollection conjures up vintage nostalgia as well as the verb form of the word chute.

Drawing also on the cerebral is BACK UP by Jordan Stubbs. It’s a looping video of tumbling inner dialogue. The phrases “When you make up your mind / That you aren’t going anywhere / If not now then when” spiral around, forming a heap of letters. The thoughts are used, recycled.

Is this washable? by Elham Masoudi is a video of a blacked-out figure taking off an outer layer of clothing. The background shows scenes from the Women’s March that took place the day after Trump’s inauguration. After the figure removes its clothes, the entire image collapses into a laundry chute. It brings to mind the subsequent conversations about the purpose, meaning and lasting effects of protests. Masoudi writes, “The consequences of these political decisions accumulate as stains on the clothes worn by government” which are then washed and worn again, “without informing the society.” I interpreted the video to be a never-ending cycle of imperfect solutions to the same issues that grow, crescendo and diminish in the political consciousness. 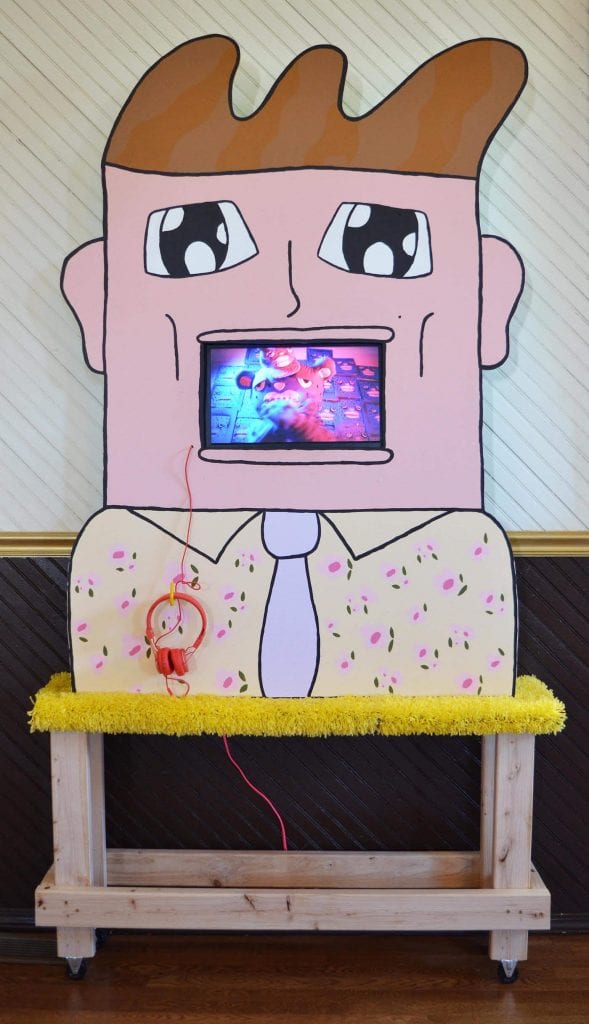 Andy Sloan Jackson’s Introducing Kumasan stands out in the exhibition with a lively sense of fun. It is a delightful piece. The viewer soaks it in from a chair in front of a large cartoon head and watches the series of shorts through its mouth. The shorts are a series of commercials that begin and end with a stuffed bear crying in front of a dumpster reminiscing about a cozy cabin. On the mantle is a snow globe of Control Center’s headquarters. With a record scratch, the scene cuts to Kumasan, a mascot-like bear figure. Jabbering away in a foreign language (voiced by Ion Yamazaki), Kumasan seems to peddle Control Center merchandise, like t-shirts, notebooks and movies. I don’t quite know what to make of it, but my sense is it has a playful rebuff of commercialism.

The peppy buoyancy of Jackson’s piece contrasts with Steve Morrison’s sober Resurgo, which is Latin for “to rise up again.” Projected onto a sheet is a video featuring a triptych of fabric that bulges and deflates. The movement under the fabric is suggestive of a body, but the undisclosed source of the movement is actually animated bread dough. Taken with the title, the bread and the triptych are all references to Christ and resurrection.

The work in CHUTE, while all starting with Minor’s essay as reference material, takes on allegory to expand the subject beyond just an architectural feature. It allows for complex reading between the text and the art.