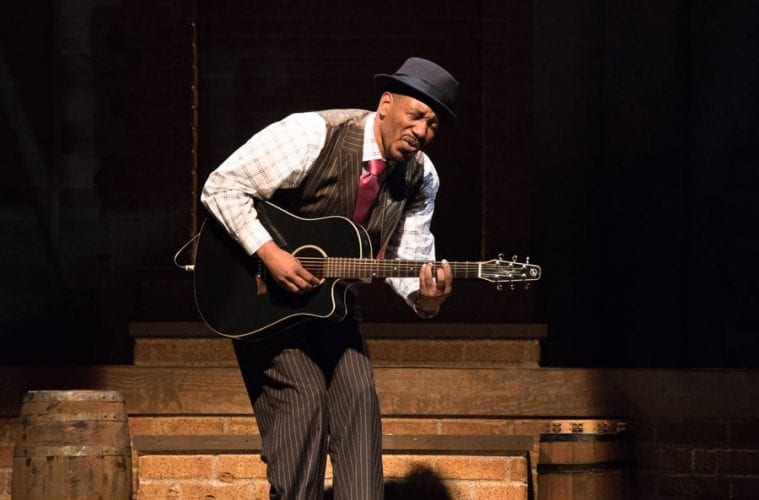 Review: “Chasin’ Dem Blues” celebrates the music but glides past the devil in the details 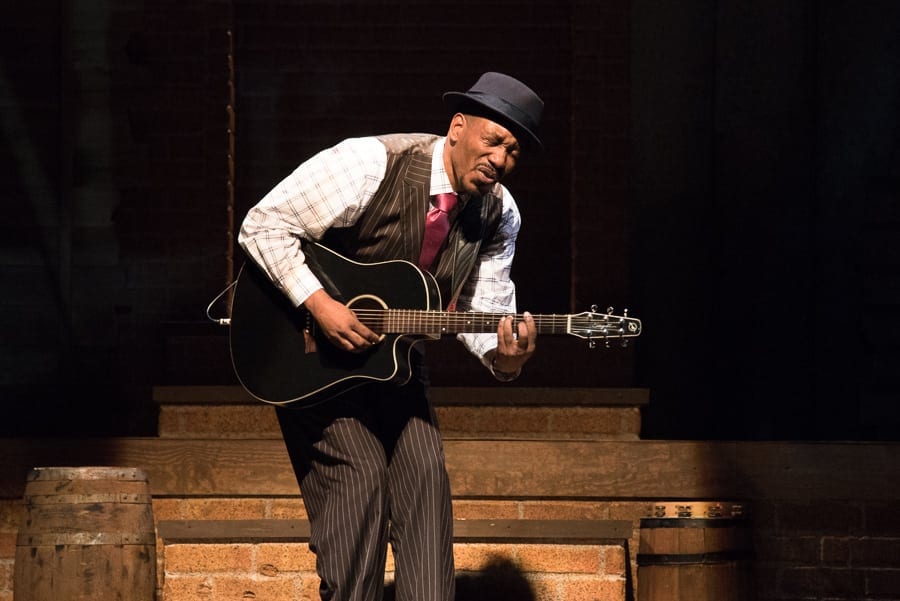 When most people think of the birthplace of the blues, they may think of the Mississippi Delta or Maxwell Street in Chicago, but they probably do not think of the Wisconsin Chair Company in Grafton, Wisconsin. It is, however, in a Wisconsin furniture factory that Paramount Records put to wax the likes of Ma Rainey and Blind Lemon Jefferson.

Kat Conley’s masterfully executed, deconstructed version of a train station along the Illinois Central Railroad is the setting for this sung-through musical. The railroad is how records were transported across the country, and the use of projections to show a train roaring into the station or a record spinning, makes the set another character in the show.

Amidst the stacks of luggage at the station is a trunk marked “Handle With Care,” and each time a member of the ensemble opens the trunk, a different story emerges. The cast members embody a different blues legend who recorded at Paramount Records (Charlie Patton, Skip James, Alberta Hunter) and give snippets of their biographies.

Chasin’ Dem Blues attempts to be for the blues what the 1970s Harlem Renaissance musical Ain’t Misbehavin’ is to jazz. This historical narrative, however, needs dialogue. The script covers a span of 50 years, and the expository information is delivered in a style that is similar to spoken word, but these moments do not sufficiently unpack the details of this complicated story. 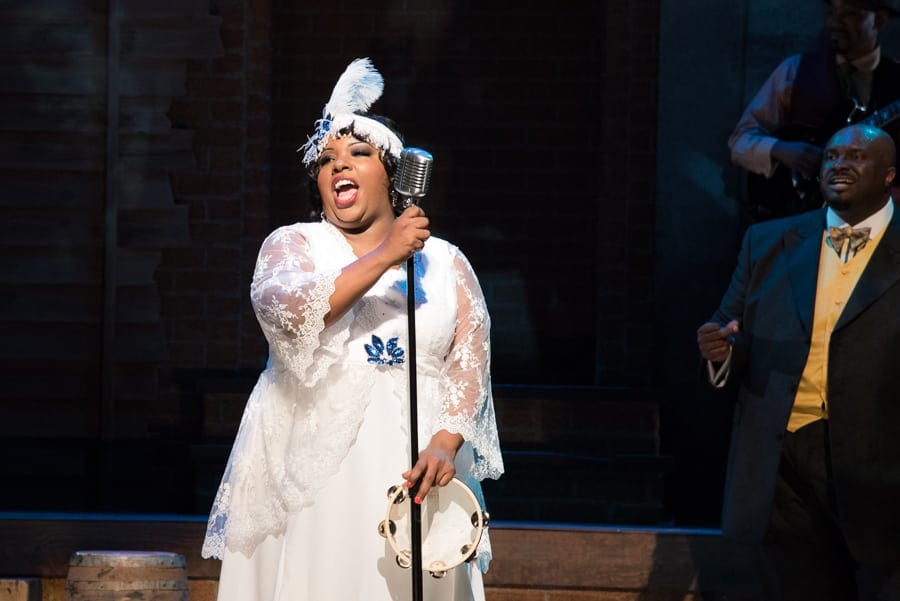 In an attempt to tie the history of the building that was home to the Wisconsin Chair Company to the Great Migration to the individual stories of over a dozen musicians, Ramsey’s script inundates the audience with too much information, too fast.

In spite of having a mouthful of history and 36 songs to deliver, the performers commit fully, belting out classics such as Ma Rainey’s “Black Bottom” and Bessie Smith’s “Tain’t Nobody’s Biz-ness If I Do,” while playing the guitar and tap dancing. They also create some fun interactive moments with the audience, but their portrayals of the various blues performers lack distinction.

For example, Maiesha McQueen’s renditions of Ma Rainey and Alberta Hunter could have shown off the cadences of the singers’ voices more. McQueen, as Queenie, gives a boisterous performance, especially in “St. Louis Blues,” in spite of these fumbles. Brad Raymond is a burst of energy onstage, giving a stand out performance as Blue with his fantastic and versatile singing voice.

As enjoyable and entertaining as the song and dance numbers are to watch, it is a stark contrast to the fates of the artists on the label. There is a recurring theme in all of the characters’ stories of singers dying penniless due to bad record contracts. Even Paramount Records suffered an end fitting of the blues when it closed during the Great Depression, and most of the masters were sold for scrap metal.

This begs the question: Are the blues the Latin of the American music world? Jazz, rock ‘n roll and country all derive from the blues, but there seems to be little interest in the genre itself. Ramsey’s Chasin’ Dem Blues offers interesting tidbits of information, and great musical performances, but ultimately leaves the audience with more questions than it answers.