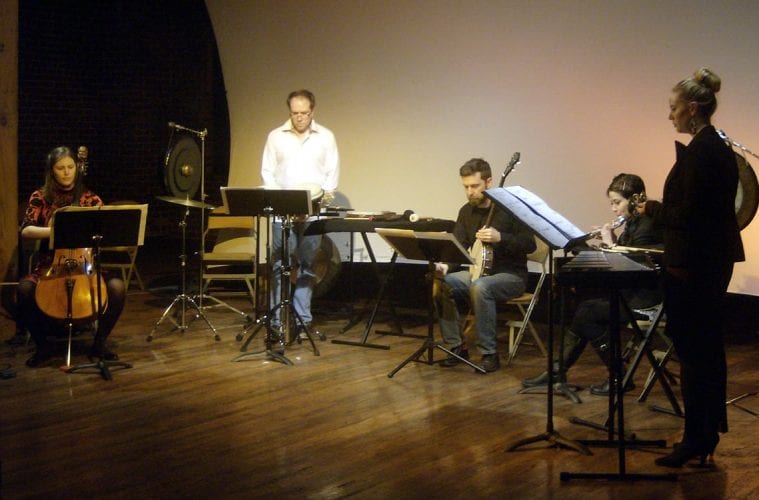 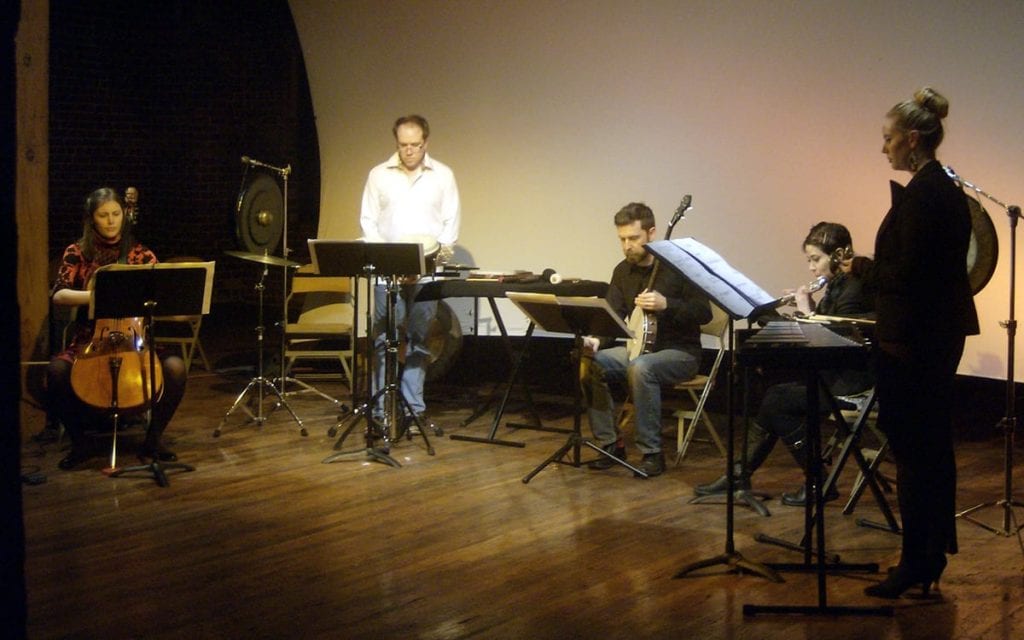 Like Snowpocalpse of two weeks before (though met with a more effective response from government and the general populace this time), last week’s winter storm caused the cancellation of rehearsals and performances in midweek. By week’s end, the weather had taken a more pleasant turn, allowing for some weekend chamber music concerts to proceed as scheduled.

On Saturday night, “new edge” chamber music group Chamber Cartel performed George Crumb’s “Night of the Four Moons” and Pierre Boulez’ “Le Marteau Sans Maître” (“The Hammer Without a Master”) at Erikson Clock in Castleberry Hill. It was a night of firsts for Atlanta: the Atlanta debut of guest Australian mezzo-soprano Lotte Betts-Dean and, astonishingly, the first Atlanta performance of the Boulez and most likely, it appears, the Crumb as well, absent evidence to the contrary at this writing.

Feliciano, Herron and Bragg (on guitar this time) were joined onstage by violist Cecilia Trode, percussionists Brandon Dodge and Victor Pons, and conductor Paul Scanling for “Le Marteau Sans Maître” (1955), the landmark work that most strongly pins Boulez to music history as a composer, although pieces like the nearly unplayable Second Piano Sonata had already established him as a “bad boy” of modernist post-Webern serialism.

In both the Crumb and the Boulez, Betts-Dean did an outstanding job of rendering the vocal parts, in addition to playing a few percussion instruments in the process. The Crumb required the greater variety of techniques, which were evidently benefited by Betts-Dean’s experience in Baroque and other non-19th-century repertoire, as well as other contemporary repertoire. She also did a bang-up job with the treacherous vocal part of the Boulez. Though her use of a tuning fork suggests she does not have perfect pitch like many singers who tackle Boulez’ music, her intonation was admirably excellent.

The third movement, a rhythmically complex and wide-ranging duet between Betts-Dean and Teresa Feliciano on alto flute was a high point in the overall nine-movement piece, which is a tougher nut for a first-experience listener to crack than Crumb’s music. At the end of the Boulez piece, there was a very long and uncomfortable pause as the audience was unsure it was over, despite several of the musicians relaxing and “dropping character,” a typical clue when such uncertainty abounds.

Sunday afternoon’s weather was gloriously clear and warm enough to be comfortable for the full house audience that came to the Garden Hills Recreation Center to hear the Peachtree String Quartet — violinists Christopher Pulgram and John Meisner, violist Yang-Yoon Kim and cellist (and one of ArtsATL’s “30 Under 30”) Jennifer Humphreys — perform music by Mozart, Beethoven and Schubert.

The concert opened with Mozart’s Adagio and Fugue in C minor, K. 546 (1788), written for string orchestra but quite playable by string quartet. The Fugue was originally written for two pianos. Mozart transcribed it for strings and prepended the Adagio introduction. You could call it Mozart’s homage to late Baroque music, more specifically to Bach, and as such, it was an interesting curtain raiser. It was followed by one of the earliest sets of string quartets by Beethoven, No. 5 in A major from the half-dozen that make his Opus 18, composed within the final few years of the 18th century.

After intermission, the group concluded with Schubert’s String Quartet No. 14 in D minor, familiarly known as the “Death and the Maiden” quartet because of his song of the same name upon which the work’s second movement is based.

For whatever reason, the group was obliged to retune frequently between movements in the first half of the concert, causing them to contend with a few intonation issues here and there. In the second half, things went much better in that regard, and the Schubert found the group in a solid and more heightened expressive zone, providing the afternoon performance with a strong conclusion.