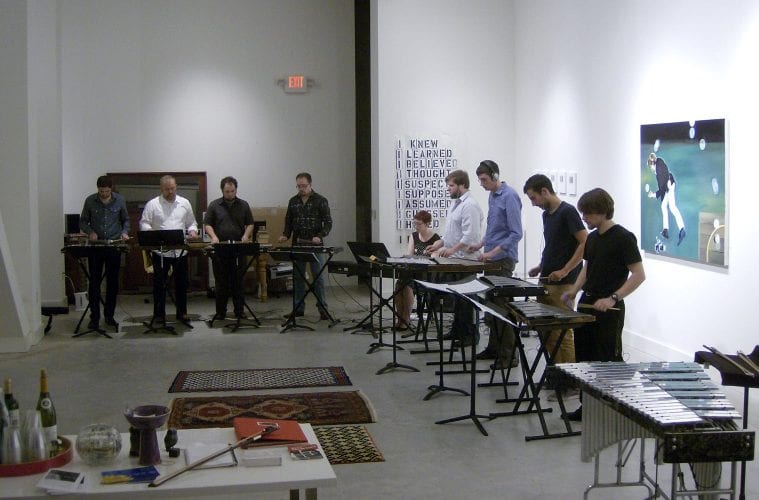 Review: Chamber Cartel, nobrow.music.collective bring out the metal at {Poem88} 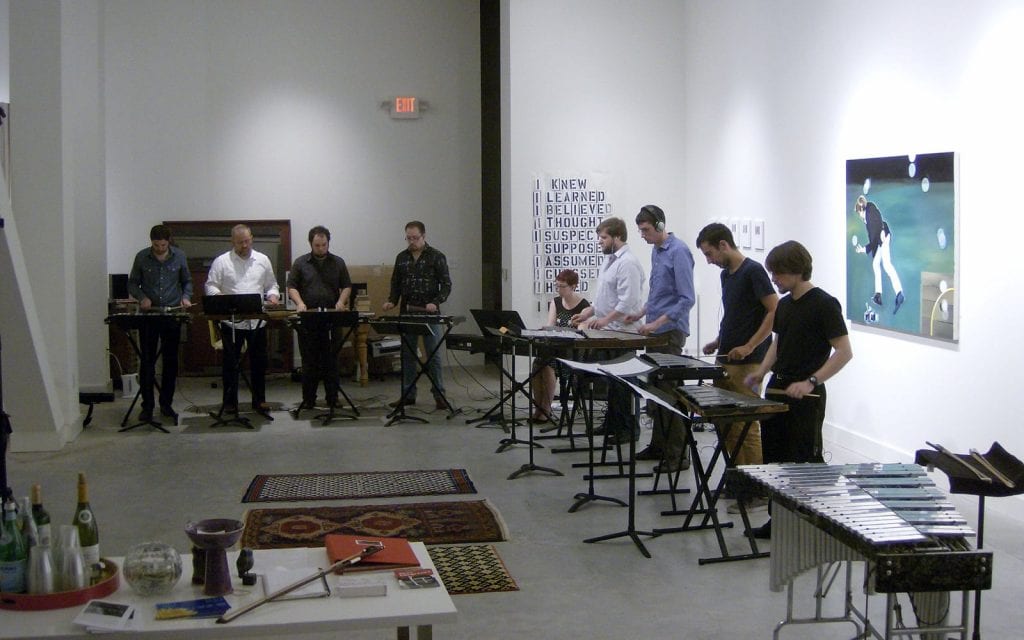 On Sunday evening, contemporary-music ensemble Chamber Cartel presented a concert of postminimalist works at {Poem88}, with guest musicians from nobrow.music.collective, based in the college town of Athens, Ohio.

The two groups share some characteristics in that their concerts are essentially curated by a single individual, with a rotating roster of musicians participating as needed for the repertoire, as opposed to choosing repertoire to fit a group of musicians. They also have similar affinities for the kinds of repertoire they explore and perform. Caleb Herron, director of Chamber Cartel, met nobrow Director Aaron Butler at the Nief-Norf Summer Festival in 2011. They have kept in touch since, and Butler performed with Chamber Cartel twice in 2012.

Sunday’s concert opened with “5 Quiet Machines” by Marc Mellits, played by cellist Daryl Giuliano, keyboardist Amy O’Dell and Herron on marimba. Like much of Mellits’ music, it’s a handful of short movements composed in a postminimalist manner. The third movement is especially noteworthy for its slow-paced, lyrical cello line, which afforded contrast to the busy, regular rhythms that typically populate his music.

“5 Quiet Machines” was arranged from an earlier Mellits work: “5 Machines,” for amplified bass clarinet/soprano saxophone, electric guitar, amplified cello, amplified bass, amplified marimba and amplified piano. There are great contrasts between the versions, the earlier with the visceral impact of a rock band, this “quiet” version attractive on its own terms, good for listening in a small space with a glass of wine or warm cup of Earl Grey in hand.

The rest of the concert could be described as “metal,” but not of the rock music kind. Rather, it’s because the music focused upon two percussion instruments made of metal: vibraphone and glockenspiel.

“Postludes” by Elliot Cole is a group of five pieces written for one vibraphone, played by four performers wielding eight contrabass bows with which they stroke the edges of the instrument’s metal bars to produce glowing sustained sounds — much like running a wet finger along the rim of a crystal wineglass, but with a richer and much more powerful sound. The performers also use their fingers to tap and mute bars and touch the bars at harmonic nodes.

The result is music that is by itself delicate, sensitive and ethereal, but which {Poem88}’s own acoustically reflective natural resonances picked up upon and amplified. It is an interesting listening experience, and it was effectively performed by percussionists Stuart Gerber, Victor Pons, Brandon Dodge and Herron.

That Chamber Cartel programmed Cole’s “Postludes” is a credit to Herron’s keeping up with what’s happening in the new-music world, as the piece was premiered just last May by So Percussion at Princeton University, where Cole is pursuing a PhD.

The three musicians of nobrow.music.collective — percussionists Butler, Joseph Van Hassel and Greg Becker — joined in for the rest of the concert.

Like Cole’s piece, “Lipogram” by Mark Applebaum is for vibraphone played by multiple performers, with four of them — Herron, Dodge, Van Hassel and Becker — using normal vibe mallets to strike chords together. Butler then used his fingers to stop those tones in succession, essentially an erasure of one note at a time from the sonic stack. In the end, the four percussionists moved their mallets in the air without striking notes while Butler continued to dampen the soundless vibe bars, causing some in the back of the audience to chuckle.

Those five musicians were joined by Gerber, Pons, O’Dell and Mike Stubbart for the final piece, “Science Is Only a Sometimes Friend” by Brooklyn composer Aaron Siegel. O’Dell played a droning organ part on a synthesizer, and the other eight musicians all played glockenspiels. The constant tintinnabulation of eight glockenspiels might be distressing to some listeners — one woman put her fingers into her ears — and it does produce a radical change in the character of the sound.

But part of the idea, as expressed in the program notes, is that the incessant chiming “creates a halo of harmonic activity around the performers that shifts depending upon the location of the listener.” As heard on this evening at {Poem88}, “halo” might not be the right word. Though perhaps the least interesting piece of the evening from a formal perspective, as a sonic tapestry, it was quite an experience.