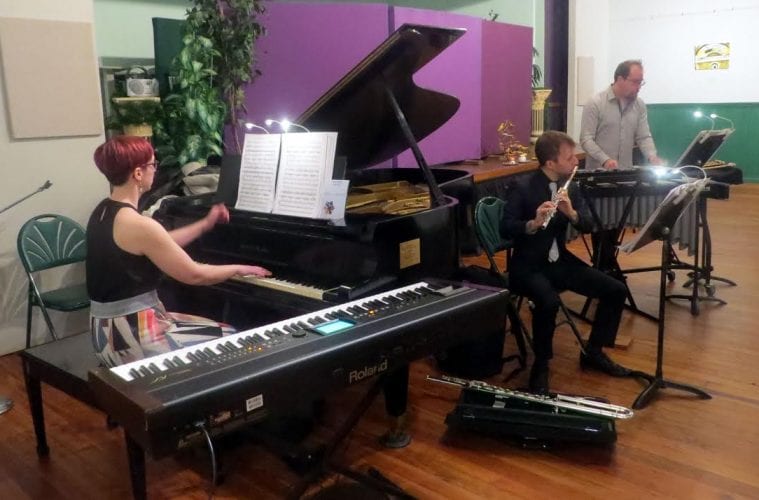 Review: Chamber Cartel marks fifth anniversary with a trip back to the future in Candler Park

On Sunday evening, new music ensemble Chamber Cartel celebrated its fifth anniversary with a performance of Morton Feldman’s “Crippled Symmetry” at the First Existentialist Church in Candler Park. Exactly five years before to the day, the group had made its debut with the very same work, performed in the same location.

According to artistic director and percussionist Caleb Herron, Chamber Cartel was “one of my better ideas” which came to fruition on that New Year’s Day in 2012. It launched an audacious agenda of mounting performances of late 20th- and 21st-century music once a month — a proposition that has been mostly met, at least close enough to validate Herron’s challenging premise.

For Sunday’s performance of “Crippled Symmetry,” Herron, who played glockenspiel and vibraphone, was joined by flutist Matthieu Clavé, playing standard C flute and bass flute, and keyboardist Amy O’Dell on piano and a Roland digital keyboard set up to emulate a celesta.

A performance of “Crippled Symmetry” typically runs between 85 and 90 minutes without pause. This one clocked in at over 100 minutes. It felt even more spacious and ethereal than it did five years ago, its patient, quiet sounds drifting through the air like gentle aromas. New, transient sonic shapes emerged, transforming and dissolving into silence as the music slowly unfolded, calmly, without emotional hurry – a counterpoint to our otherwise frenetic times.

Feldman himself described “Crippled Symmetry” as “an aural counterpart to Turkish rugs.” By the time he wrote it in 1983, he had become a collector of Turkish rugs, which increasingly became his passion before his death in 1987. I can do no better in elaborating that idea than to quote the description from my own review of the 2012 performance:

In great contrast to commercially made rugs, these folk-textile pieces, woven by villagers and nomads, feature anomalous changes in color, motif and proportion in their patterns that are a deliberate, distinctive feature of an aesthetic that is both socially vital and individualistic in expression.

“Crippled Symmetry” takes on this aesthetic in the process of weaving its recurring musical motifs. They become slightly modified in ways that are readily perceptible to the listener, with each iteration of an idea subtly altered from the ones before it. This mostly quiet music, shifting and changing slowly over time, feels like the shifting of sunlight, shadow and clouds.

The audience itself was a broad cross-section of adult generations in contrast to the 2012 crowd, who were almost all in their 20s and 30s. Over time Chamber Cartel has built up a broader interested core following. Attendance for this concert was credible — almost universally attentive, as patient and meditative as the music, which, frankly, is a hard thing to do given the music’s span and character.

But it is that very character which drew Herron to Feldman’s music in the first place, along with that of John Cage, John Luther Adams and a few other composers he admires. As Herron explained five years ago when Chamber Cartel was just beginning, “I think that these composers found some sort of ‘truth’ in their music. You can’t really put your finger on it, and I don’t think it is absolute, but it persists, it is. These composers speak to me and I feel drawn to them for the sheer stillness that they impart.”

That aesthetic has persisted at the foundations of Chamber Cartel’s work, though it has fleshed out its interesting approach to repertoire over time. Even so, for celebrating its fifth anniversary the group returned decidedly to its roots, a compelling revisitation to the music, place and tranquility with which Chamber Cartel’s artistic adventure began five years ago.