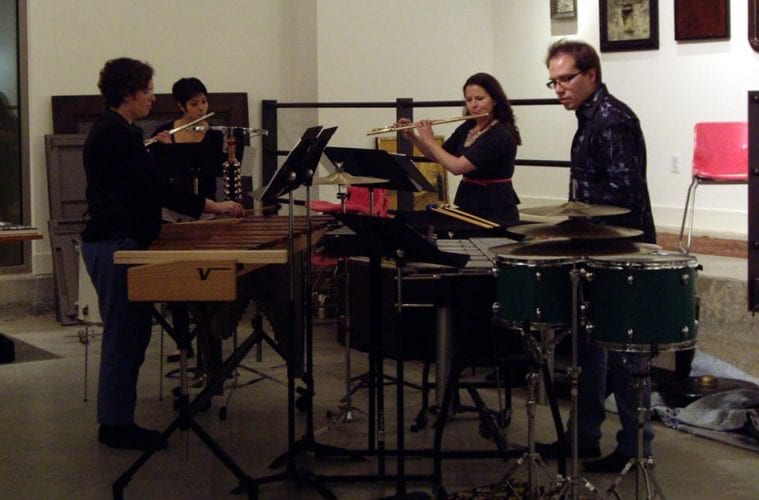 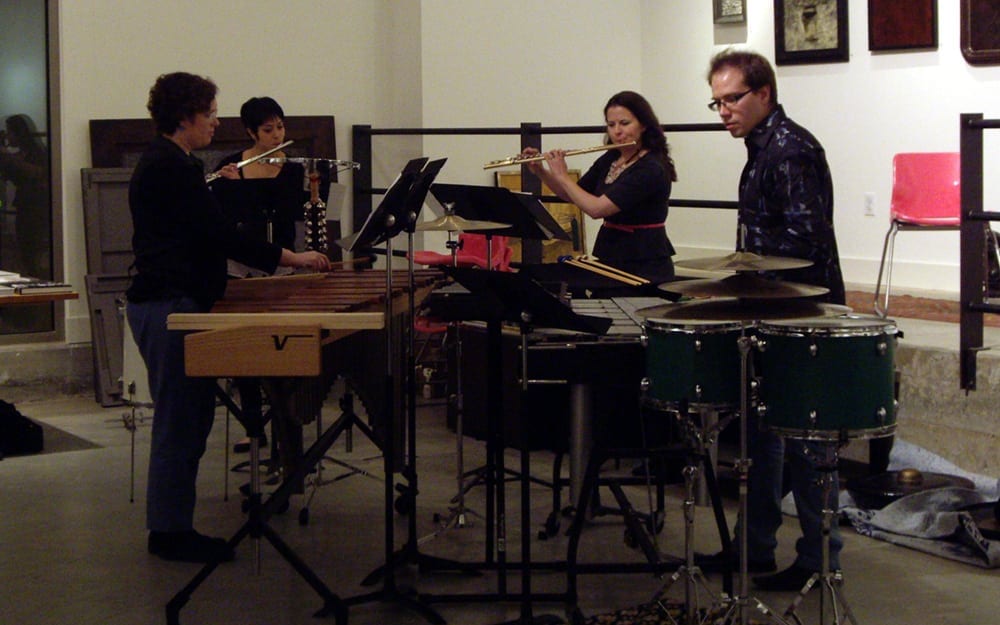 Atlanta’s Chamber Cartel presented its 12th and final concert of 2012 on Friday evening in the {Poem88} gallery space in the White Provision District, where 14th Street abruptly ends at Howell Mill Road in front the refurbished 1910 Chicago-style industrial gothic building that anchors and lends the district its name.

For those unfamiliar with the area, {Poem88} isn’t in that building, but it’s not hard to find. It’s a block south, next to the conspicuous Yoforia. If you park in the district’s free parking deck, it’s a very short walk from the elevator where a convenient district map is displayed.

As a venue for alternative music, {Poem88} is an intimate, refreshing space. At its center, a pair of square vertical columns with an X-shaped structural member between dominate; on one side, a narrow, recessed platform a few feet above the main floor sports black safety railings.

Titled “The Party,” the four-hour event was divided into six mini-concerts, with brief socializing in between. Members of the audience mingled and sampled three kinds of hors d’oeuvres prepared by Jacqueline Matia while musicians re-set the two separate performance areas. The even-numbered mini-concerts involved the piano, which remained in one area for the duration; the odd-numbered ones did not and took place in other areas of the room.

The piano provided by {Poem88} was a new Kohler & Campbell Model 48 baby grand. That’s worth mentioning because a great conundrum for concerts in alternative venues is that they tend not to have a piano at all — or if they do, it’s a wreck that came off of death row. Yes, the {Poem88} instrument has an exceptionally short scale for a baby grand, at 4′ 8” long, making it difficult for the extreme treble to speak well. But pianists need not sniff too much. While hardly a Hamburg Steinway, neither was it an oversized paperweight. The piano was in excellent condition, something to be grateful for despite the shortness of scale.

The show opened with the premiere of “Fisticuffs” by Chamberlain, performed by Chamberlain, Feliciano, Herron and Kieffer. It draws inspiration from an old-fashioned brawl, and the effect was enhanced by the reverberant room. Herron followed up with a solo piece, “Crumple,” by Jenna M. Lyle, a composer from Carrolton, Georgia, who is pursuing a doctorate at Northwestern University in Chicago. True to its name, “Crumple” is based on the small sounds made by crumpling plastic drinking cups.

As the concert proceeded, the rest of the musicians gradually became involved, with no piece requiring more than seven of them at a time. A quick rundown: “A Draft of Shadows,” a nine-minute piece from 1972 by Thomas DeLio, with a text by Octavio Paz; “Spectral Evidence” by Daniel Swilley, written in 2008 for Herron but not premiered until this concert; and Morton Feldman’s “For Bass Clarinet and Percussion,” the first of two of his compositions on the program.

The largest ensemble of the evening, seven players, then performed “Cut Up Sleep Red Stars Round Me” by Carolyn Chen, a prize-winning composer with an undergraduate degree in modern thought and literature, now pursuing her Ph.D. at the University of California at San Diego. “Figures in Bass Relief” by Atlanta composer Adam Scott Neal followed — essentially chords based upon spectral analysis of gong strokes, rendered throughout in different perspectives by changing the instrumentation.

The final three works were “Isolets” by Michael Vincent Waller, written last year, and two late-20th-century classics: the jaunty “Marubatoo” for five percussionists, written in 1989 by John Wyre for the famed Nexus percussion ensemble, and Feldman’s “Why Patterns?” from 1979, which Chamber Cartel also performed in April.

In a nutshell, the entire concert was quite ably performed. Over the last year, Herron has assembled a circle of younger adult performers who are gung-ho for new music, along with an interested if fluctuating audience. But after all, the ensemble has been around for only a year. In those 12 months it has mounted 12 performances, by hook or crook and the proverbial seat of the pants, which is more than some of the city’s more mature chamber groups offer. It will be interesting to see how Chamber Cartel develops in 2013.