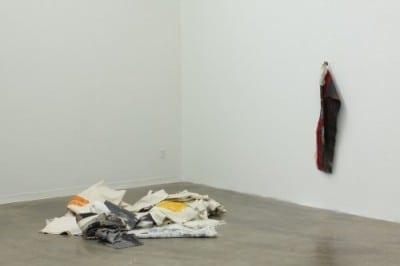 “The Important Thing About a Chair” and “Things,” at the Atlanta Contemporary Art Center through June 19, are shows focused on artists as makers of objects. It’s a simplistic notion: Artists make things. But it’s a profound idea, too: Out of nothing comes the special alchemy of creation and an object to ponder and discuss. 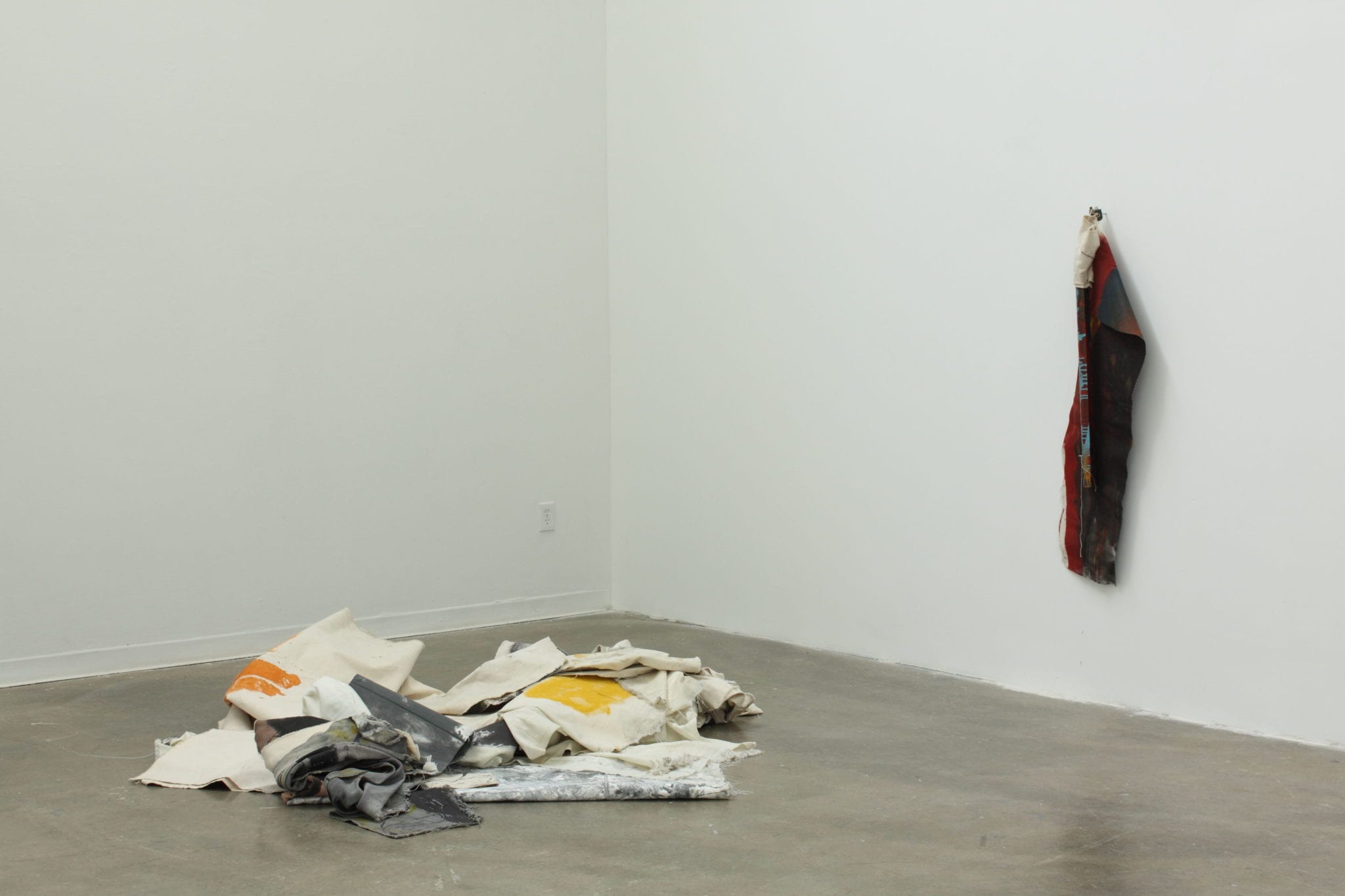 Based on the koan-like baritone description of his work in the video “John Heward: A Portrait” (2008), made by his wife, artist Sylvia Safdie, Heward doesn’t come across as a particularly fun-loving, whimsy-drunk guy. But the title “Things” and the work’s semi-strange display suggest something along the lines of wit, and a subversive approach to art world conventions. For “untitled (abstractions),” shown in part above, the Montreal-based artist has suspended yards of canvas, painted with various colorful abstractions, from the gallery ceiling. It’s painting envisioned in another way entirely, folding into itself and almost unreadable at times.

In the center of the gallery is a pile of those same painted canvases. A note on the wall text instructs, “Ask a staff member about choosing one for presentation.” But it’s not until later, when an intern walks over and offers to help you select and hang a length of canvas from a metal clamp on the gallery wall, that the work moves from conceptual exercise into exchange. It’s a limited exchange, of course, with conditions and qualifications to its interactivity. “Only this pile here is interactive,” she says, nixing any notion of a wholesale HGTV-style rearranging of the hanging canvases.

It’s one thing to be told to adopt a tarp and quite another to be invited. In a show that can often come across as too achingly, purposefully eggheady, starched and remote, the intern injects a pleasingly human element into the piece. Sometimes viewers want to be drawn in. And if anyone even thinks about replacing my selection — a color-drenched canvas ornamented with a piece of painted wood that dangles like a crucifix around someone’s neck — there’s going to be hell to pay.

Heward is clearly an artist enraptured by process, by the mystical magic of creating objects to adorn walls. He invokes the primal human urge to make “things” by referencing cave paintings in his wife’s video. He both celebrates that glorification-of-man idea and undercuts it, with his swinging canvases and interactive, democratic invitation to his audience to play along. 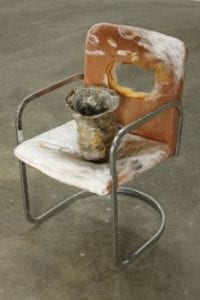 Much as Heward envisions painting in new form, Portland-based artist Jessica Jackson Hutchins takes things that are quotidian and utilitarian and renders them personal and eccentric. The hand of the artist is asserted in “The Important Thing About a Chair,” which blends conceptual exercise with a nicely handmade, crafty vibe.

The pieces put me in mind of Depression-era sharecropper shacks wallpapered with newspaper pages. There is something spiritually connected in the way Hutchins hijacks grotty, left-by-the-roadside chairs and couches toward her own purposes, ornamenting them with her ceramic pieces, making something homemade from the manufactured. (At left: “Written.”)

In “Cloud,” the artist has created a homemade ceramic vessel that only a mother could love, whose pot-like form, ornamented with two large handles like ears on Mickey Mouse’s head, rests on a modernist chrome chair. It is adaptive reuse of a kind seen in folk artists, the poor, the homeless, the elderly and others who have no patience with being told how to see the world or operate its bossy devices. You think refrigerators are just for inside kitchens? Or that couches are best relegated to the living room? Drive through any small Southern town and you’ll find ample evidence to the contrary.

Though more heady than wacky, a spirit of fun does occasionally enter into things here, as in “Rondamoo,” a plaster sculpture leaning like a drunk against a wall, a kind of dejected, Disney-meets-psychedelic creature whose form keeps threatening to morph from abstraction into cartoon. Hutchins’ sculptural pieces tend to have a more pleasing directness and sense of play than her wall-based pieces, which use commonplace materials — paper cups, T-shirts, images clipped from newspapers — to create representational scenes.

Hutchins’ sculptures pay greater dividends for their frumpy, human touch. It is those assertions of the hand, the evidence of personality, that yield the best results in both artists’ work.